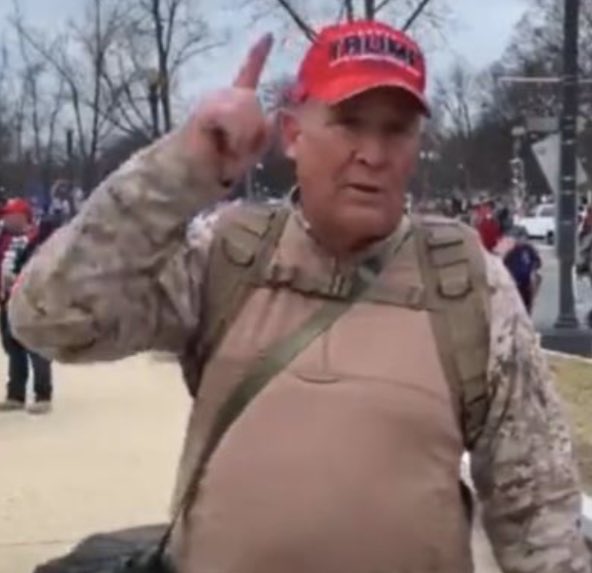 Ray Epps is an enigma. He is the only person thus far to have directed people to enter the Capitol without finding himself under arrest.

Some of us think Epps is either a Fed or and FBI informant. One giveaway to Epps’s involvement in Jan 6 is the degree to which the media, democrats and the RINO weasels Cheney and Kinzinger have gone to defend Epps.

The statement came after the FBI and Justice Department leadership refused to confirm or deny, under oath, whether Mr Epps was working with federal authorities or whether they knew why he hasn’t been charged in connection to the violence.

The ever reliably left-wing hacks of Snopes:

There’s no evidence to indicate that Epps went into the Capitol himself or that he committed other criminal offenses. As of this writing, Epps has not been charged with any crimes related to the Jan. 6 attack.

As you may know, Epps has been the topic on FA before, three of them are here, here and here. As the days of democrat control of the House wane more and significant details are uncovered. Epps’s transcript reveals that he not only participated in the events of Jan 6, he “orchestrated” them.

🚨On January 6th, Ray Epps texted his nephew “I was in the front with a few others. I also orchestrated it.”

Why did Democrats go after Trump but not him?https://t.co/61X5m7FoET pic.twitter.com/BXcxYPdt8y

He left Trump’s speech before it ended, by himself, to direct people to the Capitol. He’s at the site of the first breach of the exterior lines with the Proud Boys and the still-uncharged individuals in neon hats. This happens as Trump is still speaking. pic.twitter.com/nrQ1bK0eBJ

He stayed there for a while

He left Trump’s speech before it ended, by himself, to direct people to the Capitol. He’s at the site of the first breach of the exterior lines with the Proud Boys and the still-uncharged individuals in neon hats. This happens as Trump is still speaking. pic.twitter.com/nrQ1bK0eBJ

Adam Kinzinger coughs up a furball

He doesn’t want you believing your own ears and eyes

Kinzinger Do you think that the American people are deaf/dumb/ blind look at this video and you tell me that FBI Plant are Agent Ray Epps did not incite violence and lead the American patriots into the capital😳 Why Isn’t He Locked up❓️Your nothing but A 2-Bit Politician 👇 https://t.co/Ksn1Gp4Dyv pic.twitter.com/iKBOgmvaGX

.@DarrenJBeattie accurately noted how Kinzinger acts as Epps’ defense atty rather than serious interrogator. This is really galling considering how many lives have been destroyed by DOJ, J6 committee. Never an ounce of sympathy except for Epps. (Always unacceptable of course) pic.twitter.com/Avca7w1OqG

And that’s a strong argument for Jan 6 being a Fedsurrection.

This is the icing on the Pelosi/McConnell cake., which showed that Pelosi and McConnell knew in advance of the possibility of a riot and intentionally refused to provide additional security for the Capitol. Pelosi knew it was coming- she even had her daughter pesent, making a documentary about it. But the real smoking gun of Jan 6 being a Fedsurrection lies with the Jan 6 committee’s secretive actions. They’re burying the evidence with the JFK assassination files

The full records of the closed-door testimonies and other information gathered by the January 6 Committee could remain hidden for decades, thanks to the its secretive nature and to laws protecting committee records.

The committee, which was entirely one-sided against former President Donald Trump after Speaker of the House Nancy Pelosi (D-CA) took the unprecedented step of blocking minority party nominees, followed the equally problematic practice of Rep. Adam Schiff (D-CA) in conducting his impeachment investigation into Trump in a restricted room of the House Intelligence Committee, thereby controlling the flow of information.

They’re hiding something- a lot of something

Congress is not subject to the Freedom of Information Act, and House rules, which lawmakers approve with each new Congress, set an at minimum two-decade timeline before the public can see records that are preserved.

That means that potentially millions of pages of depositions, cellphone and text records, emails, staff notes and analysis by outside organizations compiled as part of the committee’s investigation that don’t make it into the official final report or aren’t released before the end of the year won’t become public for decades — if they ever do at all.

House Republican Conference Chairwoman Elise Stefanik, R-N.Y. — who took over the role after House Jan. 6 Committee Vice Chairwoman Liz Cheney was voted out of the post — called the panel “un-American.”

Stefanik pointed to Thompson’s 2021 comment that “nobody is off-limits” from investigation including former President Donald Trump, but also cited further comments by the 13-term Democrat she said suggest he excepts Pelosi.

“Again, you have only one office that’s off-limits to investigation, and that office is Nancy Pelosi’s office. The Democratic head of the committee, Bennie Thompson, said at the start of this witch hunt that everything is fair game except for the speaker of the House’s office,” she said.

Of course he did. That’s where all the bodies are buried.

Then there isn’t any reason to ever vote nationally again.

“Then there isn’t any reason to ever vote nationally again.”

Local, State, Federal. That’s how our government and laws work and that’s the power base from strongest to weakest.

And should a mccarthy become speaker, a paul ryan clone, there will never be the complete investigation necessary to reveal the truth. The fedsurrection was an orchestrated operation to quell the constitutional challenge to the counting of electoral votes. Had the challenges of the contested states in question; Arizona, Georgia, Wisconsin, Michigan Nevada and Pennsylvania continued and those votes held, it would have dropped biden below 270. And, if some or all of those states retained their electoral votes enough to keep biden below 370, the election would have have gone to the House of Representatives where Republicans had a 27-23 one vote delegation advantage.

biden would have never been installed on January 20. That is why the pipe bomber and Ray Epps became key figure heads in the Fedsurrection.

The Gateway Pundit reported Friday that House Republicans discovered how Pelosi’s staffers deliberately weakened security at the U.S. Capitol for Jan.6 and ordered a cover-up. Steven A. Sund, the Capitol Police chief on that fateful day, not only confirms her culpability along with the rest of the Democratic leadership, but also how his own agency and the intelligence community let the Capitol attack happen.

The Washington Post acquired an advance copy of Sund’s book “Courage Under Fire,” which will be released on Tuesday. He unveils his perspective on what happened, who he most blames (not Donald Trump), and why America still remains vulnerable to a similar attack.

Sund also reminds America that Pelosi utilized him as a scapegoat and forced him to step down as Police chief. We all know now she was just trying to obfuscate her own responsibility for the attack.

3
Reply
Deplorable Me
Reply to  TrumpWon

Only if the book is full of unnamed sources, speculation and innuendo will Democrats take it seriously. They believe that is the only source of truth and facts.

Without knowing all the facts, I don’t necessarily want Epps in jail, but he was in the “restricted zone”, a “crime” for which dozens of others languish in jail for right this moment. On top of that, despite Kizasser’s absurd denial, he was openly encouraging the very thing the “committee” declared was worse than the Civil War, sinking of the USS Maine, Pearl Harbor, 9/11 all wrapped up together. So, why isn’t he in jail?

Kinzinger’s assumption that everyone is as stupid as he is pretty much sums up the credibility of the Komidy Klown Kommittee, which is zip.

Congress is not subject to the Freedom of Information Act, and House rules, which lawmakers approve with each new Congress, set an at minimum two-decade timeline before the public can see records that are preserved.

So, if, as the epic liar Schiff says, they have a mountain of evidence right in their hands PROVING Trump incited an insurrection, why would they want it suppressed for 20 years? If they have the facts and proof, why not show the American people these irrefutable facts and convince people like myself? Like everything else the Democrats touch, all this does is stoke suspicion and doubt. Of course, their lemmings need no proof or facts; they are driven by their hatred of anything that makes this nation better and simply have to be fed the lies that justifies their hatred.

I would love to see “Boy, Can I Pick Those Stocks!” Pelosi grilled by an opposition prosecutor. She would fold like an umbrella, lashing out at the gall of questioning her words and actions. Look at her meltdowns when a reporter actually asks her a pertinent question; she melts down. SHE needs to be held accountable; SHE’S in this up to her saggy jugs.

3
Reply
TrumpWon
Reply to  Deplorable Me

Very well said. The corrupt political party you reference is the entrenched DC power structure predominantly democrat but with controlled opposition of the Rino wing of the Republican party. They are the enemy of the American people.

democrats have been unable to establish President Trump is solely to blame for the J6 protest/riot. It seems convenient to take the entirety of the unconstitutional j6 group of clowns so called investigation and pass it off to a special counsel. What ability does a special counsel have from an investigative perspective that a congressional committee with full subpoena power would not? The ploy is to try and keep the narrative alive. The special counsel is already burdened by a level of political bias that makes it difficult to believe any outcome will be the least bit impartial.

Jan 6 was a “Fedsurrection”? LOL! Most of us have known this since it happened. Welcome to the fight.

It’s one thing to “know it” and it’s another to have evidence. If you follow what I’ve written you’ll see that I built a case from very early on

And those of us with a functional brain THANK YOU!!