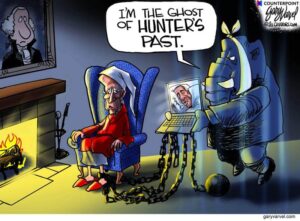 Welcome back to Say 703 of America held hostage by the Biden* Regime! Sorry for not posting last week, but as I mentioned at the end of the previous episode there would be no TWIRL while the Bob Family took some much needed R&R. I meant to write a non topical post, but I forgot to grab my laptop on the way out the door. I took it as God’s way of telling me to disconnect for a few days, so I did. Since we’re in both Christmas and Hannukah seasons, this week’s post will be brief, as will next week’s for the New Year.

My goal in life is to stay as far away from the vaccinated as possible this winter. pic.twitter.com/jFsljNUkcI

Typical of leftists, Farthead doesn’t care about the issue of record numbers of illegal immigrants, thieves, drug dealers, human traffickers and fentanyl being invited into our country by idiot Biden, he only cares about trying to invent some “gotcha” that will get him a pat on the back by other brain dead leftists. No, that’s not doxxing people entering our country illegally; that is documenting a crime and invasion.

Does anyone actually think idiot Biden is taking the actual vaccine? I wonder if in addition to his usual kickback for pushing the vaccine, idiot Biden gets a bonus for every person killed by it?

While this may be “conduct unbecoming of an officer”, it is conduct common to mentally deficient sexual deviants, which is a protected species of the left. There will be no disciplinary action other than to tell the freak to stop posting his sick activities publicly.

Today in Texas, global warming has the hot water lines to my bathroom faucets frozen.

Could just call them “cookies” but I bet that offends someone somewhere.

Maybe only those who have not been vaccinated with numerous boosters can make it to their cars without dropping dead from a blood clot to the brain.

Whatever happened to an economy of words? The left can’t every improve anything, so they just change what we call it.

The left wants authority to be worshiped. They have to eliminate all other objects of worship, thus they now try to replace bona fide religion with worship of drag queens, sexual predators and professional liars.

Merry Christmas to you and yours and Happy Hanukkah! Leftists can’t ruin the season this year!

The left wants authority to be worshiped. They have to eliminate all other objects of worship, thus they now try to replace bona fide religion with worship of drag queens, sexual predators and professional liars.

Let’s take it a step further – ultimately, through their various avatars, whether Obama, RGB, etc. they worship themselves

Merry Christmas to you and yours and Happy Hanukkah! Leftists can’t ruin the season this year!

Merry Christmas to yours as well!

Micro aggression alert:
Ok so what is more satisfying than biting the heads off of them?

MERRY CHRISTMAS
right now its -9F with a windchill of -35, That means here in the Frozen tundra we put the shorts in a storage bin til around February.
All you non-tundra frens change the furnace filter and stay cozy.
This weeks meme

WHile DC isn’t as bad as your have it, it’s going to be fun walking Doggie Bob and Puppy Bob the next few mornings. Thankfully, neither of them got the jab

You have a puppy!
Make sure he gets just the minimum of doggie jabs. Despite huge advances in doggie nutrition, they are dying much younger.

Not to worry – I am religious about keeping up with all of their jabs/treatments. PB is 1 1/2 now, but you can tell she has one of those personalities that’s not going to slow down until she becomes an old girl. Which is probably both good and bad…

Read again, just give them the least jabs to keep them legal. Years ago a dog got 1 rabies vaxx good for life, now they have a yearly or every 3 years…why? If you dont kennel your dog save your money and skip kennel cough. ( find a trusted doggy sitter) I was a sitter for a rottweiler he was my mini poodles best bud. God is doggy sitting them both now. I am down to 1 toy poodle rescue doggo she had a bad start but has her forever home. Being a house dog and never kenneled she is done with the doggy jabs, now in her senior years. I will get another mini when she goes to play in doggy heaven. My daughter says she will take her if I go first.(you know sh!t happens, make plans you wouldnt let your kid go to the pound)