The clown show that is the White House 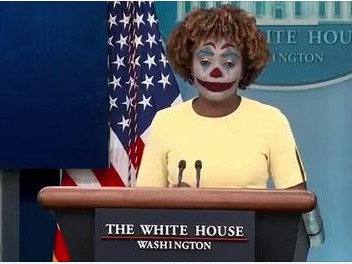 This woman is a moron. An absolute moron. There wasn’t a trickle of disinformation yesterday, it was a torrent.

Karine Jean-Pierre: “the president has been doing the work at the border since day one” pic.twitter.com/X8kWTkpLHA

Jean-Pierre: “It would be wrong to think that the border is open. It is not open.” pic.twitter.com/wbt1tZ9cfj

The WH is resisting ownership of the push to lift Title 42, repeatedly characterizing it as a decision by the courts.

President Biden, back in April: “I can give you a straight answer. We had proposed to eliminate that policy by the end of May.” https://t.co/VrsB6VgONT

This was coordinated with the press

KARINE JEAN-PIERRE: “One of the reasons that I wanna be very clear to folks that the border is not open and we will remove using Title 8 is because by not being very clear on that we are doing the work of the smugglers.”

Raddatz takes up the talking point

This woman does not deserve her job nor does she deserve the opportunity to address anyone outside of a mental institution.

She ignores so many attacks on our nation with this idiotic statement – Pearl Harbor, September 11th, the Boston Marathon Bombing just to name a few. https://t.co/QxAApMiSF7

BIDEN ADMINISTRATION: “It would be wrong to think that the border is open. It is not open.”

Jean-Pierre: “We have secured more resources for the border than any president who preceded [Joe Biden]” pic.twitter.com/McePSg6Xgy

And here is the plan

Q: What’s the plan to work with Congress to address the border crisis?

Karine Jean-Pierre: We will continue to push for mass amnesty. pic.twitter.com/9Z3CcPORld

JEAN-PIERRE: “The President…believes our democracy is still under attack and that we have to do everything that we can to protect it.” pic.twitter.com/m9WYq4Wd0G

Democracy is under attack. Joe Biden is killing the country, but this gets it right.

PRESS SECRETARY: “What we saw on January 6th was the worst attack on our democracy since the Civil War…Our Democracy continues and remains under threat” pic.twitter.com/0jclKuNPju

The lies spewing from this clown are incomprehensible. What’s mind-blowing is the MSM totally ignoring it.

Her only defense is …look what she has to work with.

A lack of understanding the concept of right and wrong?

“the President has been doing the work at the border (of destroying border security and inviting illegal immigrants in) since day one.” There, fixed that right up for the little liar.

No, the border is not open; that doesn’t quite describe it adequately. It is AGAPE. It is erased. It is non-existent.

The border is a massive disaster and it is about to get exponentially worse. Idiot Biden is totally and completely responsible for this catastrophe. Where is that stupid little idiot Sandy, fake crying and calling the shelters “concentration camps”? Where are the phony photo ops of her crying against a fence of an empty parking lot? You damned leftists, do you not see how transparent your hypocritical lies are? You are all completely stupid assuming WE are stupid enough to accept this.

What did JFK jr. think of Mr. Biden?

The FBI has been taking over this country.
They picked joe.
https://www.americanthinker.com/articles/2022/12/why_did_the_fbi_want_joe_biden_to_become_president.html *
They picked joe’s cabinet and top people.
Why pick such awful people?
To DISTRACT the American people from what’s really going on.
Thank goodness for Elon Musk.
The 6th tranch of releases shows how willing the FBI has been to lie, cheat and steal from American citizens.
Quit being distracted.
Focus on the coup that took over our country and installed joe and his clowns.

﻿The FBI have been operating a lot more like a crime syndicate than federal law enforcement, and they have been keenly interested in suppressing free speech on social media……

The FBI has been 1. controlling what you and I have been allowed to say on the Internet.

The FBI had a bunch of “former” employees on Twitter’s payroll 2. actively helping suppress free speech on their platform.

The FBI had 3.secret channels of communication between an agency of them and a privately-owned social media company that were used exclusively to control the public narrative about an election-changing event.

The FBI also 4. paid Twitter millions of taxpayer dollars to suppress our own free speech.

How could the FBI possibly think they could get away with a conspiracy like this and corruption to this degree?

Well, they have been getting away with it and no one has yet to suffer a consequence of note – Kevin Clinesmith received probation for deliberately lying on government documents in order to produce incriminating evidence against a U.S. citizen coincidentally named Carter Page.

Former FBI officials Andrew McCabe and Peter Strzok are being rewarded with lucrative jobs in the media instead of prison sentences.