Biden Trades the “Merchant of Death” for Griner the Whiner 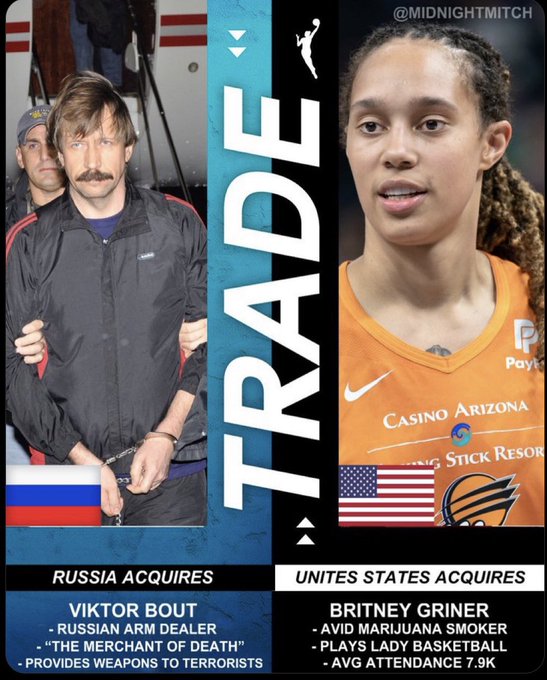 Well, “Wreck-It” Biden and his minions struck again.  In a moronic move, the American hating, National Anthem kneeling, Brittney Griner was released from a Russian prison in trade for a….wait for it…a convicted arms dealer nicknamed the “merchant of death.” Britney will be back in the good old US of A just in time for Christmas to open her presents.  Soon she will appear on The View and vomit hatred for all things American.  Britney will probably write a book blaming TRUMP, TRUMP, and TRUMP for her incarceration, thank Mother Russia for her release and be revered as a hero by all the American leftist, liberal, loonies.

While incarcerated in a five-star Russian penal colony in beautiful Mordovia, Britney was never forced to hear our annoying National Anthem.  She didn’t have to waste spit desecrating the American flag and her food (gruel with a side of moldy bread), lodging, and healthcare were absolutely free.  She will soon miss her cellmates after learning to say, “please don’t shank me” in Russian, exercise time in the yard (building snowwomen), and bonding with other inmates who were mesmerized by horrible stories of her despicable life in America.  Fellow inmates pinky promised to stay in touch and gave her an I

Conservatives in this country believed that Griner was afforded a golden opportunity to enjoy all the perks of a communist country up close, and she should have stayed longer-much, much longer. Liberals are jealous that Britney vacationed in a communist country and renting an Airbnb in Russia, North Korea, and China are #1,#2, and #3 on their bucket list.

While Griner is enjoying a Merry Christmas, others are not as fortunate.  American Ambassador Chris Stevens, information officer Sean Smith, and two CIA operatives, Glen Doherty and Tyrone Woods, both former SEALs, were left behind in Benghazi in 2012.  They heroically died waiting in vain for their country to save them.  When Biden skedaddled out of Afghanistan, he deserted many Americans and left them behind in the clutches of the treacherous Taliban. Those trapped patriotic Americans are still waiting to be rescued, but the media moved on because they got bored. Now we must suffer listening ad nauseam to Meghan Markle and her hubby whine that nobody loves them.  She just dreamed of being the Queen of England, wearing that sparkly crown and making the filthy peasants bow in her presence.  Whats not to like?

Another patriotic American, Ashli Babbitt, was murdered, in cold blood, at the Capital building on January 6, 2021.  She was an Air Force veteran who respected the flag and served her country with honor. Ashli should be home celebrating Christmas with her family-just like Britney.

Griner is lucky to be free again in the USA.  Others may reside in America but have been illegally deprived of life, liberty, and property without due process of the law, which is a violation of the 5th Amendment.  I speak of the Americans arrested and still detained for their participation in the January 6, 2021 protest at the Capital.

Reports flow in-through family, friends, official and credible channels-that these detainees are “isolated, living in poor conditions, cannot meet with reporters, are increasingly invisible, just forgotten people. That is not how America works.

Apparently, this is exactly what America has become.  We trade a whiny basketball player for a “merchant of death” and shamelessly torture, starve and abuse patriotic Americans right here in a fetid Washington DC prison. The silence of our elected officials on this issue speaks volumes.  Ronald Reagan in his farewell address to the nation proclaimed:

America is a shining city upon a hill whose beacon light guides freedom-loving peoples everywhere.

It is easy to be ashamed of this latest display of weakness. The current illegitimate government does not represent the views of a majority of American citizens. The majority of Americans are currently being held hostage by a government that would be foreign to that which the Founders and Framers envisioned. They would surely recognize it as a tyranny of the minority against the majority. Seems like the pre history of 1776 is repeating itself in 2022.

The Russians mock @JoeBiden for leaving behind a “hero, a decorated Marine” for “a black lesbian hooked on drugs”.

Is this effective propaganda?

Jean-Pierre on Brittney Griner’s release: “She represents the best of America.”

Jean-Pierre on Brittney Griner’s release: "She represents the best of America."pic.twitter.com/6ZfRryEkp8

The best of America?

How far we have fallen.