Biden’s perverted pandemic prostitute presidency is about The Great Reset 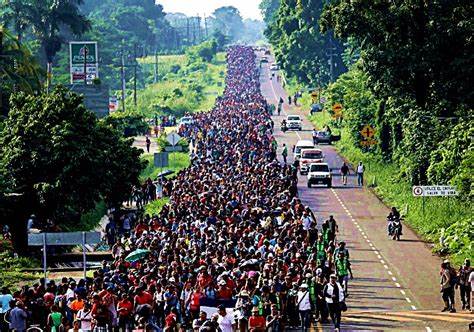 The US is going to end as a nation when Title 42 expires. It will be Biden’s plan- and legacy.

When he’s not hunting down a young girl to sniff or grope (or a daughter with whom to shower), Joe Biden is usually on vacation. During the few hours he has the stamina to sustain energy for his elected office, he’s generally abusing his presidential powers. When it comes to the pandemic, Biden’s gyrations are enough to make your head spin.

Title 42 was instituted in early 2020 because of the pandemic.

In the early days of the coronavirus pandemic, the CDC issued a public health order on March 20, 2020, that officials said aimed to stop the spread of Covid-19. The order allowed authorities to swiftly expel migrants at US land borders, and it’s been extended multiple times. The policy is widely known as Title 42, for the portion of US code that allowed the CDC director to issue it.

Democrats wanted it ended and it was headed that way

On April 1 of this year, the CDC announced plans to terminate the order, stating that it’s no longer necessary given current public health conditions and the increased availability of vaccines and treatments for Covid-19. The policy is scheduled to end on May 23.

Title 42 was extended but now is expected to end in about five weeks.

Not so fast. Biden needed to have a reason for mail-in ballots and drop boxes, which are key to democrat election victories. Thus weeks after declaring the pandemic over, he extended his pandemic emergency powers which justified all of the above.  Aside from greasing the election skids, there was another campaign benefit. He could buy the votes of GenZ’ers, which he did by trying to transfer student loan debt from those who owe the debt to those who do not. This sort of thing is very popular with the younger crowd. Biden even went so far as to fantasize that some imaginary bill had been passed.

Biden flubbed a statement about his student loan relief plan, claiming it “passed by a vote or two.” His forgiveness plan was an executive decision that did not go through Congress.

And no one challenged him on it.

It would have amassed to hundreds of billions of dollars. Facing the possibility that the Supreme Court would crush him Biden then decided to use his COVID powers to “pause” repayment of the debt, which costs taxpayers vast sums of money. He has not extended the pause to June of 2023 under the guise of the COVID emergency, which doesn’t exist anymore.

When Title 42 does end, it will signal the end of the US as a nation. The borders will collapse:

The impending end of a pandemic-era border policy is leading to U.S. Border Patrol workers’ preparation for a massive wave of migration just before Christmas, according to six agents who spoke with the Washington Examiner.

Thousands of agents with Border Patrol are bracing for a collapse of the migration system once Title 42 ends, which was a policy put forth at the onset of the COVID-19 pandemic under President Donald Trump that allows immediate expulsion of asylum seekers during a public health emergency.

‘When Title 42 ends we are going to see an already broken immigration system become completely inundated across all sectors,’ one agent told the Examiner, asking not to be identified by name, location or job title.

‘There will be no choice but to prioritize administrative/detainee functions over actual enforcement,’ they added, explaining that officials will need to put immigrants on parole and release as many as possible in order to ‘avoid another large scale media event.’

A senior agent in West Texas said: ‘Title 42 was a cracked dam. We all know that when it breaks, a huge flood is coming. The flood of people coming in at once will cripple our already broken immigration system.’

‘Customs and Border Protection will have no other choice but to release virtually everyone,’ they added.

As one resident of El Paso put it:

If you have no borders you have no nation. That appears to be part of the Biden plan. Biden’s Build Back Better plagiarizes the goals of the World Economic Forum, or WEF.

The Build Back Better plan comes straight from the Great Reset’s playbook. Great Reset supporters, especially the World Economic Forum, have been calling for some variation of a “Build Back Better” plan for years, often using those exact words in WEF materials.

In fact, as recently as July 13, the World Economic Forum promoted “building back better” through “green” infrastructure programs as part of the Great Reset in an article titled “To build back better, we must reinvent capitalism. Here’s how.”

The WEF is run by a cadre of megalomaniacs and egomaniacs, beginning with Klaus Schwab, who sees the world as his personal snow globe.

“Every country, from the United States to China, must participate [in the Great Reset], and every industry, from oil and gas to tech, must be transformed. In short, we need a ‘Great Reset’ of capitalism,” wrote Klaus Schwab, the head of the World Economic Forum (WEF), in a recent article for WEF’s website.

Schwab is also famous for saying that in 10 years “You’ll own nothing” — And “you’ll be happy about it.”

I know a lot of people who won’t be happy.

A world ruled by oligarchs. This is where we are headed.

Most of us have seen that nasty set of on-the-beach photos of Klaus Schwab in his tranny, less than skimpy, cod piece.
He’s a freak!
And joe filled his Admin with freaks, too.
Like Sam Brinton, a genderqueer drag queen into BDSM, who has appointed to oversee the US’s nuclear power plants.
All freaks love to freak out the “normies.”
So, Klaus pushes the envelope about how you eat bugs and be happy.
Sam was travelling by pland, saw a nice piece of luggage at the carosel after the flight and simply stole it!
He didn’t care that it was over $2,000 of someone else’s property.
There are no punishments for someone like him because he ticks all of the victim boxes.
And he act like he knows that.

Brinton is a member of the sacrilegious drag queen society called “Sisters of Perpetual Indulgence,” which mocks Catholic nuns.
Brinton, who goes by the name “Sister Ray Dee O’Active,” attended the group’s 2021 “Lavender Mass” where he paid tribute to “Daddy Fauci.”

michael would say, “but how does this affect your life at all?”

Yeah, he would, totally disregarding the fact that we pay the salaries of these worthless wastes of skin and that their employment displays how totally incompetent the entire regime is.

The entire regime is a freak show. Take that failed science experiment “Admiral” Rachael. Look up what those service ribbons represent sometime. What a total f**king joke, embarrassment and insult to everyone in the military now and past.

The left wonders why some snap and go off on these deviants.

How vile and despicable is it to give illegal immigrants a choice to take the vaccine or not when US military and many private sector workers were fired for not accepting a vaccine they neither wanted or needed. There is a never ending flow of examples of how anti-American this regime is, yet far too many are far too stupid to realize it. Or, just as likely, they are just as anti-American as idiot Biden and his string-pullers.

The border, like the economy and energy independence, is another vivid example of how Democrats take something working really well and completely wrecking it, creating chaos and disaster. If the pandemic was really such a concern, why introduce millions of un-vaccinated, un-tested illegal immigrants into our population? If the pandemic has diminished to the point where this is no longer a concern, why is the regime still firing military personnel for not accepting, as illegal immigrants have the option, the sometimes harmful or deadly vaccine?