Hold Your Head Up! Tuesday was a Bigger Victory for America than We Realize 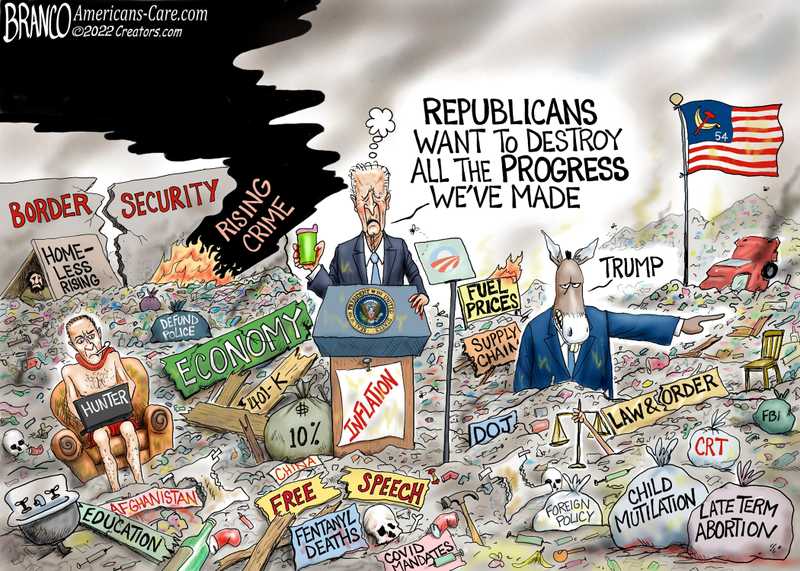 So there’s no misunderstanding, I realize that there is a lot of bad with what happened on Tuesday. I could probably add a few thousand words on top of the excellent piece that Dr. John offered, and I was among the many who stayed up late on Tuesday looking forward to a tsunami of MS-13NBC tears. Obviously, I was disappointed like the rest of us Normals, but a piece by Ace, The Other Side Gets the Ball Too, put things in perspective for me. (emphasis mine)

We got a little self-deluded about abortion having all but vanished as a factor in the race. It didn’t.

Abortion was a costly victory. That doesn’t mean you don’t take the victory; only a GOPe Grifter would say that you perpetually run on an issue and never actually try to win that issue on a policy level.

But winning the issue of abortion, finally, did provoke a powerful backlash from the 40% of the country that considers abortion to be an unholy sacrament.

And on that, even though abortion faded as an issue as we got close to election day, millions and millions of votes were cast weeks and even a month before election day. I checked the Pennsylvania mail-in voting rules; the website didn’t give a firm date, but it said early voting usually takes place “4-6 weeks” before election day.

So people were casting votes for Fetterneck in the last week of September. When the July-August passions over Dobbs were still hot.

The emphasized part is what changed my thinking. What’s the point in legislative victories if they don’t lead to significant policy changes? Granted, the overturn of Roe v. Wade came from the Judiciary, but do you think that outcome had a snowball’s chance in Hell if Hillary’s coronation had been completed? One of my many frustrations about the Trump presidency was how with control of The White House and Congress how little was done in terms of substantial change. Yes, those tax cuts were nice until they got wiped away with the stroke of a pen after the Dems stole a few elections to “fortify” their power back in 2020. McCain’s torpedoing of the Obamacare repeal had me cursing at my vote for him in 2008 and the small contributions I sent his campaign back in 2000. But I digress…

So yes, when you get a game changer pushed through there will be a backlash from those who were happy with the previous game. Do you think that the Dems would trade the electoral bloodbath that surrounded it for the passage of Obamacare? Wasn’t that supposed to wipe them out for a generation up and down the ticket until… (checks calendar) 2018? So this time we had the unique circumstance of an invalid in the White House whose handlers aren’t even trying to hide the fact that they want to destroy America, and on the opposition side a major victory just prior to the election. And even if the red wave wound up as a red trickle, The Radical Left would happily trade results with what we Normals achieved.

Yes, the major losses were disappointing, and in some cases, infuriating. But when you look at the big picture, with the exceptions of angry, single, middle aged women, and their followers in Gen Z, the Dems took hits up and down the ballot. Their entire future is staked on a people willing to accept misery. Granted, The Radical Left is very good at marketing misery, but history has proven that misery is not a sustainable philosophy. And make no mistake, we have a lot of work to do. But we have a path forward. The Radicals only have a tenuous hold on power, and they know it. Now it’s time for us to do our election post mortems, log all of our lessons learned, and create some game plans.

The idea that Republicans need to pander to Gen Z by compromising even more on abortion is just pathetic. Hey, maybe if we give up all of our principles we’ll win some votes before the demographic time bomb goes off! Have some dignity.

The idea that Republicans need to pander to Gen Z by compromising even more on abortion is just pathetic. Hey, maybe if we give up all of our principles we’ll win some votes before the demographic time bomb goes off! Have some dignity.

Matt Boose said, “Hey, maybe if we give up all of our principles we’ll win some votes before the demographic time bomb goes off!”

Fact is we were in a net zero population growth/shrinkage before joe took office and opened the floodgates at our Southern Border.
Now we are in for a population time bomb soon as these kids reach childbearing age.

covid killed off a lot of our older population but joe brought in a lot of CATHOLICS who really don’t buy into abortion as any answer for anything at all.

The next Gen after Gen Z will be those of Gen Z that actually understood having babies and not being a pedophile “LGBT” is a good thing.

So those satanic morons are culling themselves out of the gene pool, while they try to push eugenics.

Remember, as Stalin observed they don’t have to make babies if they can assimilate ours

Proving to the fact that what we get from the M.S. Media is nothing but leftists propaganda that’s just one reasons a totally quit the M.S. Media 20 years ago and I will not go back

I used to watch some to get the other side’s perspective. Now that it’s just nonstop vomit I just peek in here and there for blog post ideas. Reaction videos to their stupidity are way more informative

Did you see the morons declaring Fecalman to be Presidential fodder? THERE’S a contribution to your Week post.

That’s a lengthy essay of its own if I can get the time!

No, it is the left that has to compromise on abortion. The only way they made abortion an issue is by lying about “bans”. Nowhere is abortion banned, merely regulated. As Democrats do, they exploited the abortion issue, proving they really don’t care about it, merely use it,

Abortion will develop like immigration reform; Democrats will cling to their demands for late term abortion on a whim up to the moment of birth because it’s a deal breaker; a poison pill. It is the most unreasonable demand imaginable, especially since those defending abortion claim it is rare and only happens in emergencies. So, why not eliminate it (except for valid emergencies)?

It only takes a majority of one in the House to control the House. We can investigate idiot Biden and the Biden Crime Family, but don’t expect the Pretorian Guard of the DOJ to act on any criminal activity and don’t expect the media to show support for justice (unless they finally get sick and tired of idiot Biden dragging the entire nation and most of the world down into oblivion). The truly disappointing aspect is that we didn’t get a super majority in the Senate so we could actually get rid of some of those incompetent and corrupt ass-warts.

We still need Hershel down in GA. Hopefully the GOP wises up and decides to stop letting the Dems steal that state and throws every resource they have at it.

I think the fact that that ignorant-ass libertarian won’t be in the race will push Walker over the top, Democrat cheating notwithstanding. They better fight like Walker is only the 50th Senate Republican because nothing is guaranteed in Nevada or Arizona.

Just a reminder, folks. The GOP hates you as much as Democrats hate you.

They are the same.

Vote against the Uniparty, and take a stand. They are no longer democratic.