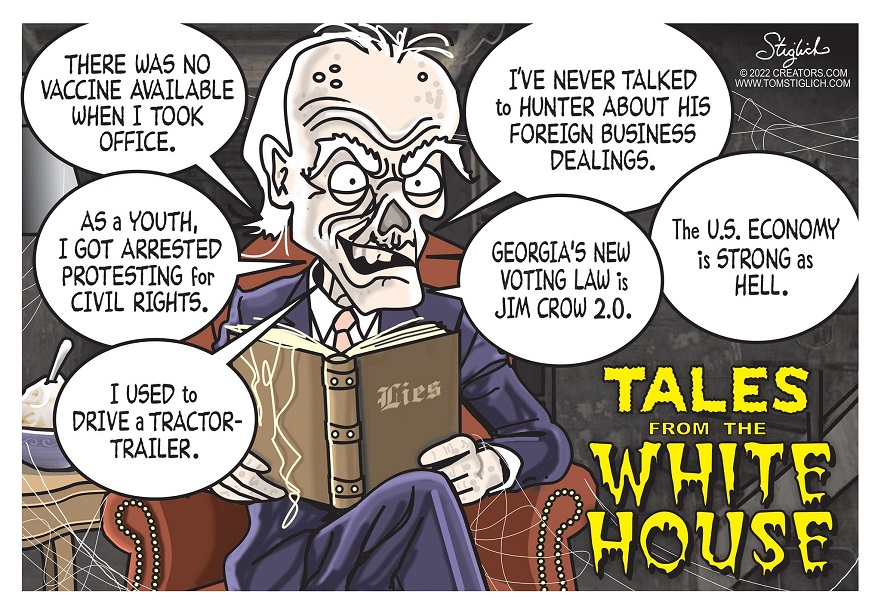 Biden* has made the news with some, ah, colorful speeches lately. Everyone remember’s his legendary “Pedo Hitler” speech in Independence Hall in Philly back in September. And now, in the spirit of being the unifying stateseman that he is, Biden* went on TV last night to warn America that the country is in danger if we… vote against his radical agenda that’s destroying America. But that’s not why I’m writing this post.

Easily forgotten in Biden’s* recent angry speeches along with his stumbling and stammering senior moments was a pre-recorded speech he gave back in July. But first, let’s explain the title of this post.

Fans of the original Star Trek will remember the classic episode “Patterns of Force”. The crew of the Enterprise is seeking the absent cultural observer, John Gill. They find him on a planet that’s been transformed into… Nazi Germany. Apologies for invoking Godwin’s Law here, but believe it or not I’m not comparing Sundown Joe* to Hitler, nor his regime to the National Socialist Workers’ Party. OK, the comparison wouldn’t be completely off base, but like I said, that’s not what this post is about.

In Patterns of Force, (spoliers ahead, but the episode is over 50 years old if you haven’t watched yet) Kirk & the gang catch up with Gill, and learn that the planet was suffering from severe poverty and he hoped that he could replicate how the Germans turned their economy around minus the mass murder. Of course, events didn’t turn out that way, but the significant part is Gill’s condition when they find him. Seen on the TV screen, Gill seems… odd. The microphone is positioned in front of his mouth so the viewer can’t see his lips move. Gills speech patterns are off. And when Kirk and the gang finally get back stage to meet the government’s figurehead, it’s also apparent that he’s in bad physical shape and has been drugged to get through his speeches.

The prerecorded speech that Grandpa Badfinger* gave was badly edited, and his pupils looked like he was on some major drugs to get him through. The link contains a pair of Tweets with the video in question. It’s just plain creepy. And that brings us to where we are today. The Radical Left spent the last two years gaslighting us Normals that a dementia patient who campaigned out of his basement got more votes than Barack Obama. Now it’s almost impossible for the Democrats’ court eunuchs’ in the legacy media to cover for the president. And when the day comes that Joe* finally has a severe public breakdown we won’t let them lie and tell us that they always knew he had health problems and was dumb even before the dementia. Their efforts to reverse their positions on Covid lockdowns, defunding the police, etc. are failing, and so will this.

Minor programming note: The latest Week in Radical Leftism is locked and loaded, and will publish either on Friday night or Saturday morning to give this post some time to breathe – BB

Everybody vote for the party that calls you roaches https://t.co/lSGd5PnEPe

The Star Trek Election: Trump as Kirk and Biden as John Gill – The American Spectator | USA News and Politics

John Gill is a respected old Earth History professor sent to the developing planet Ekos as a Cultural Observer, but he has been incommunicado for six months. Assigned to contact him, the starship Enterprise finds Ekos to be militarily advanced far ahead of its time as a Nazi regime. Kirk and Mr. Spock beam down and observe Ekosian storm troopers abusing natives of the now weaker planet Zeon “on orders from the Führer.” The two recognize a poster of the Führer as John Gill, and learn he has made no personal appearance in two years, speaking only through the Deputy Führer, Melakon. But about to order the “final solution” against Zeon, the Führer plans to give a televised speech that night. Kirk, Spock, and Dr. McCoy catch part of the speech on television, and deliver what could be the best assessment of Joe Biden today:

The three men break into the broadcast booth and discover Gill is now a narcotized semi-vegetable, again presciently evocative of the former vice president.

“They’ve kept what’s left of him as a figurehead,” says Kirk.

“Quite correct,” says Spock. “For the last few years, the real power has been Melakon.”

The real power behind Biden is the far Left. All its followers hope to do is drop him over the electoral goal line then step over him to achieve their destructive ends: unrestricted abortion even post-birth, open borders, higher taxes, trillions wasted on impossible objectives such as ending climate change and racism, opposition to freedoms of religion, speech, and the right to bear arms, police reduced and remade into a repressive rather than protective force, activist judges on a packed Supreme Court, unrestricted voting, compulsory denial of science that recognizes only two genders with no possible crossover between them, and other horrors. Only one man can stop them, like Captain Kirk thwarted Melakon: Donald Trump. And progressives want to do to Trump what they did to Kirk — eliminate him.

My first rule of blogging is to not write on a subject someone smarter than me has already covered. Thanks for ruining my day, jerk!
jk… great read & thanks for sharing!

Yo bro, my apologies. Certainly not my intention to offend.

I thought it prescient that more than two years ago biden had been pegged.

Again, my apologies for offending your content. Not my intention.

Not at all! The article had a few other good episodes whose parallels I’d missed, and I was still able to make my point that varied slightly. Always a good conversation here!

Take heart both you and the author of the AS article were giving Biden way to much credit, Biden never had a mind to lose with or without drugs. Politic is the perfect career for these types, just have the laws written for you by your political donors that put/keep you in power. 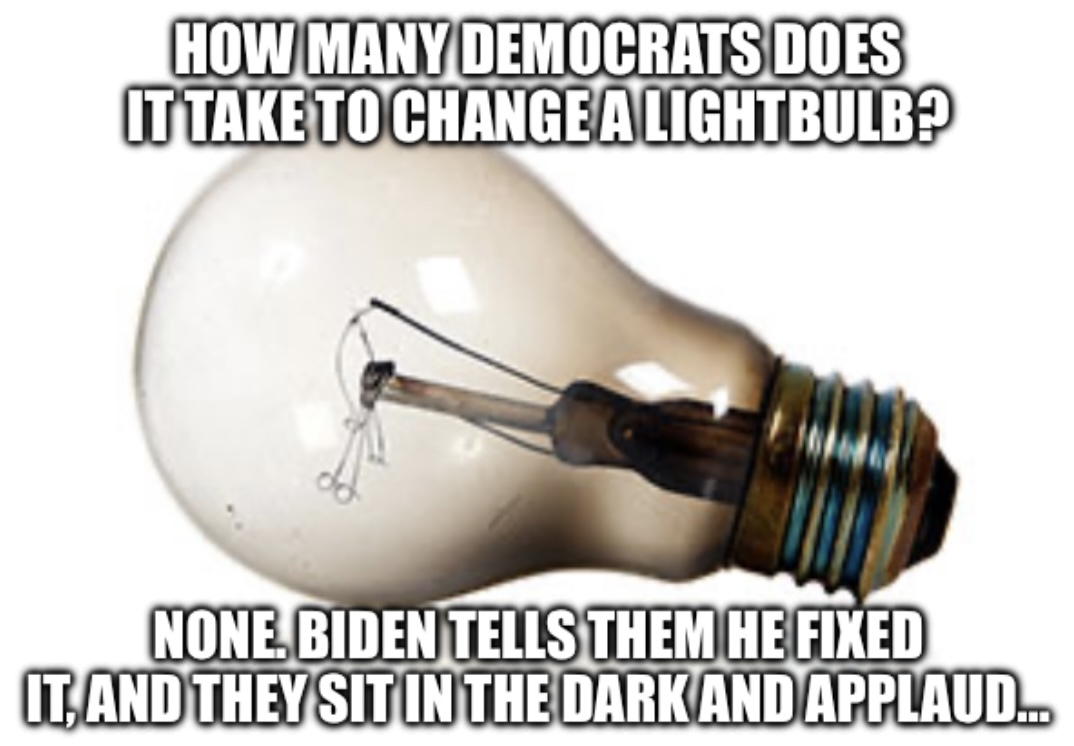 This is SO true…

Too true to be funny

Meme them til they cry, then make memes about them crying.

Biden is more like Captain Tracy of the USS EXETER

I usually always try to watch such speeches, to be able to react to them based on first hand knowledge, but I cannot endure idiot Biden’s speeches. He lies incessantly and remorselessly, lies which are obviously and provably false. This speech he started out with the lie that Trump demanded the Georgia AG “find” 11,500 votes. Not the case at all, and he knows damn well it is a lie. All idiot Biden and Democrats want to do is incite hate and distrust, to distract from their catastrophic failures.

It’s not idiot Biden that needs the drugs; it’s his lemming followers that need to be drugged to believe that crap.

It’s too pinful for me to watch elder abuse in real time. I just watch reaction videos or read about them

I also cannot watch Biden’s speeches. Yes, it is elder abuse and his wife should be in front of a intelligent judge explaining why she promotes such abuse. Same with the guy in PA.

Anyone who ever watched Justice Thomas’ hearings would have no use for Joe Biden. He sat in the lead seat, mush rolling around in his head, with Ted Kennedy at his side (even then, Joe was dangerous on his own). And while Kennedy whispered in Biden’s ear, Biden did his damn level best to let Thomas know that no black man, married to a white woman, was good enough to sit on the Supreme Court of the United States. So while Thomas’ intelligence was clearly off the top of the chart, he was insulted by a man who was nothing more than a idiot liar.

No man who spent almost his entire campaign in his basement garnered more votes than Obama. It didn’t happen. And the left can play the “Election theft is a lie” card all they want, but I can tell you the very people who claimed 2016 was a stolen election giving us an “illegitimate” president know that didn’t happen in 2016 but in 2020. Marc Elias and Mark Zuckerburg knew what they were doing was illegal, but they didn’t care. They needed a Pinocchio and Joe Biden was their guy. Keep him out of sight, rig the election and then fill the Oval Office with Obama retreads. Yahoo, we’ve now got Obama’s third term.

Marc Elias and Mark Zuckerburg knew what they were doing was illegal, but they didn’t care.

Marc Elias is no longer allowed to practice law in the State of Texas and Zuckerbucks, or any other “donations” to county election offices is also now illegal in Texas.

But the states that were in question in 2020 are never going to clean up their elections. The powers that be want Democrats to win (thereby allowing them to cheat.)

Elias was the mastermind behind the steal in 2020. The law firm he was at, Perkins Coie dumped him in 2021 expecting Durham might indict him. No such luck so he went rogue and is at it again in 2022.

He should be indicted and sent to prison.

Im not so sure he was not just a major middle man.
Elections all over the planet are questionable. 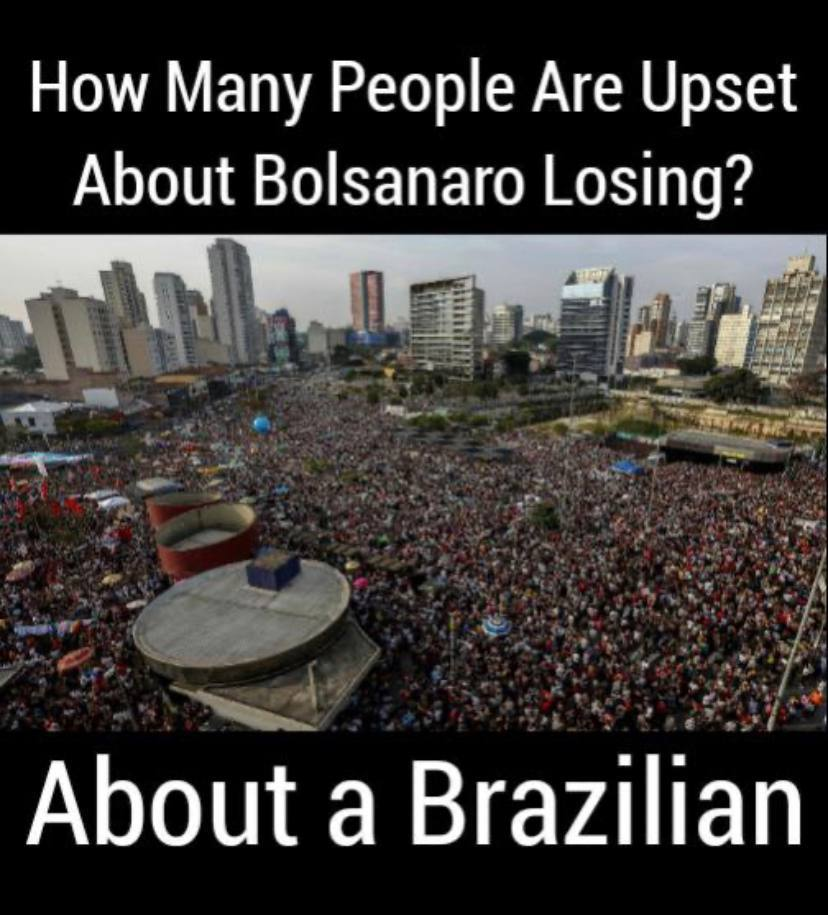 Biden IS the insane pathological liar they try to paint Trump as.