Collapse of Civilization: Lessons Voters Might Take From Roman Britain 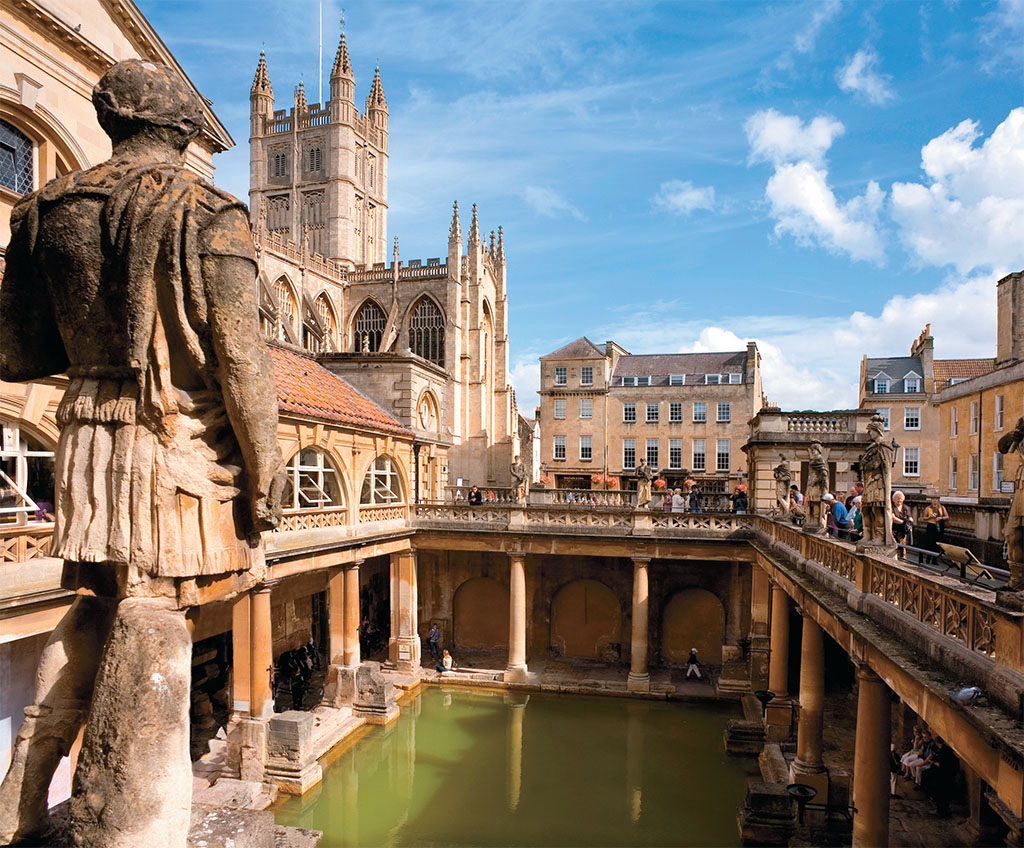 Those who don’t know history are destined to repeat it. – George Santayana

At the end of the 2nd century AD Britain was a fully developed province of the Roman Empire.  It was as Roman as any city in the Empire. While still largely rural, Roman Britain developed towns and cities that mirrored those found in Italy or North Africa and connected them with a spectacular roadway. They had majestic villas, sprawling estates, baths, plumbing and of course aqueducts.  The Romans brought industrial sophistication to mining, unprecedented architectural capabilities and improved agriculture.  The province was awash in imported goods from around the Empire: Wine from Gaul, olive oil from Hispania, pottery from North Africa, and philosophy teachers from Greece; all the while exporting precious metals, agricultural products, shellfish and salt across the Empire.

One of the extraordinary things about the Roman Empire was the unprecedented, widespread prosperity it created from the Pillars of Hercules to the Levant and virtually everywhere in between. While there had always been a market for fine goods such as silk and porcelain and exotic foods, the Romans brought those goods to the masses. By building roads, ports, transportation hubs and funding the trade necessary to support the Legions, the Romans drove economies of scale and created a mass market for goods that had formerly been available only to the rich but had become inexpensive across the Roman world.  In doing so they created a cosmopolitan empire so thoroughly Roman that people from what are today Morocco and Britain and Germany and Israel likely spoke some version of the same language and would have found familiar products available regardless of where they were in the Empire.

Back in Britain, three hundred years after Caesar first invaded the untamed island in 55 BC the province was a sophisticated, shining example of all of the Empire had to offer. It was not to last however… In less than a century after the Romans abandoned the island for good in 410 the population collapsed, the economy collapsed, cities became ghost towns or disappeared and chaos reigned. Londinium, whose population peaked at 60,000 in the 2nd century, dropped below 20,000 and saw more than 75% of its buildings dismantled with the materials carted off into the countryside.

In less than a century Roman Britain went from a rich, flourishing cosmopolitan province with bustling urban centers and goods from across the known world to an economic and cultural backwater where modern architectural, plumbing and farming techniques seemed to have disappeared along with most of the import of goods.

Most of the people living on the island in the middle of the 4th century probably assumed, like much of America in 2022, that the advances of civilization move only in one direction, upward.  They expected to continue to enjoy inexpensive food and pottery and clothing from elsewhere in while selling their wares in return.  The government would continue to provide protection and would maintain the ports and roads that facilitated trade.

When those things didn’t happen life in Britain became a far darker experience.  Cities disappeared, warlords set up fiefdoms and invaders came from seemingly everywhere. Farming techniques were lost, building techniques were lost, trade collapsed and citizens were forced to become self sufficient as numerous petty would be “kings” set up trade and travel barriers and goods from the Continent became scarce.  The opposite of economies of scale and free trade took hold and Britain became far less prosperous as goods became more expensive, countless products and varieties of products simply disappeared and staples had to be produced locally.

It’s here where Santayana’s missive becomes relevant. Given that the history of post Roman Britain so clearly demonstrates the fragility of civilization’s advances, we might want to pay attention.  The reality is, our world, far more tenuously than the Britain of 1700 years ago, is but X bad decisions away from an agrarian, subsistence economy with no electricity, no gas, little trade, few economies of scale and most certainly no security or safety.

Go through a day and see how many things we rely on that we couldn’t replace if a disaster occurred.  Imagine a blackout.  How many things would that loss of electricity impact?  Not only the lighting in our homes, but the refrigerators, phone chargers, garage door openers as well.  Outside our homes there’s even more: Elevators.  Gas pumps. Plumbing.  Street lamps & stop lights. Virtually everything in a hospital. Cell phone towers. Police switchboards and dispatches. Train signals and countless other things.

Then there’s the social aspects of such a crisis.  Rules and laws would go out the window, and it wouldn’t take long. During the New York City blackout of 1977 crime surged, with looting, vandalism and arson rampant (over 1,000 fires were set) while police arrested 3,776 people in the largest mass arrest in the city’s history.  The chaos cost over $1 billion in today’s dollars, and the lights were off for less than 24 hours!  Now jump forward to the BLM / Antifa riots of 2020 and the defunding of police.  Not only was there chaos and mayhem, there were murders, assaults, and rapes nationwide and communities literally burned to the ground. Then there is the mass looting and random violence that has occurred since 2020 and seems to be growing worse every day… and through all of this we still had electricity!

Of course electricity is only one element of what keeps our society civilized.  There’s gasoline, there’s trade, there’s what used to be a widespread respect for the rule of law.  Imagine no diesel fuel.  Trucks wouldn’t be able to deliver food and store shelves will go bare.  You probably have enough food in your kitchen for your family to last a few days or maybe a week at most. Then what? Are you going to grow wheat on your windowsill or in your backyard?  Is the neighborhood stray cat going to be your family’s next meal? Do you have a cow for milk? Not to mention medicines, building materials, gasoline for your car… the list of goods delivered via diesel is endless.

One of the downsides of trade, division of labor and economies of scale is that most of us are dependent on others to provide for us those things we don’t produce for ourselves… which is to say, almost everything.  Our society is based on a trade system where we get paid to do some things and we pay others to do the things we don’t. It’s a well oiled machine… until it’s not.

And that’s the point.  The climate alarmists who want to do away with fossil fuels have no concept of the ramifications of that folly. The equity cultists who want to eliminate the police and “reform” the justice system don’t care about the consequences of that absurdity.

Just as the razor thin layer of atmosphere surrounding the earth sustains life on earth, our modern society thrives thanks to plentiful, inexpensive energy and a respect for the rule of law.  Inexplicably, those are the two primary targets of the Democrats who are currently in charge of wide swaths of the United States.  Indeed Californians regularly endure the absurd manmade disaster of rolling blackouts while Illinois is about to essentially decriminalize crime.  Neither is necessary…

When Americans step into their well lit, safe and private voting booths on November 8th they’d do well to think of those 5th century Britons who were about to careen into a darkness from which it would take almost a millennia to emerge, and vote accordingly.

sigh. This is the most depressing of topics, IMO. Yes, society can collapse in the blink of an eye. But it’s so perplexing that our “leaders” seem to be doing all they can to make it happen! I would love to be more optimistic, but I just bought another 25# sack of rice the other day, so that tells you how much hope I have.

On the other hand, some scholars say life expectancy increased in general due to lack of oppression and the ills of civilization, overcrowding, lead poisoning etc. And people were too busy to persecute minorities, until things got built up again and they had leisure to rob and slaughter.

At least when the roman Empire fell it was mostly because of overextending and foreign incursions.
Here, when the USA falls, it will be because globalists wanted it and made it happen mostly from within.
All dems are globalists as well as around 1/3rd of all elected Republicans.
Sad but true.
The WEF globalist agenda includes taking the USA down multiple notches so as to make it a source for cheaper labor than at present.
Globalists, like their name implies, want an end to borders.
joe is making that a reality for the USA.
Globalists want the world’s population to drop by a large percentage.
Covid, dem’s covid policies and Big Pharma’s poisons are aiding and abetting this.
Globalists need to eradicate private property.
joe’s equity policies enable this.

I’m glad I moved away from CA 10 years ago,
In Utah almost everyone keeps 6 months’ of food on hand.
It makes getting ahold of such long-storage life foods easy to get.
And more people doing it means fewer people looking for me because I’m going it.

Hi, Nan. Meant to give your comments a thumbs up, but I hit the down button by mistake. Yes, all Globalists are liberals, and the Religion of Liberalism is the ideology of the damned and the insane. Apart from believing in Christ and the accompanying grace of repentance, Hell is their final, eternal destiny.

Vince, well done. Great article. The parallels are daunting and appropriate.
As you know, what you describe of London’s disintegration occurred throughout the Roman Empire even to Rome which rapidly descended into a dilapidated, ruined, dangerous and vacated city.

A book by NYT revered, Stephanie Kelton, “The Deficit Myth”, from a couple of years back, gave Globalists, Marxists, bankers and Big Government worshipers, their talking points >> endless government debt is great. And the notion, of course, spread to personal debt.
She is evidently clueless at to what motivates human beings, or how an economy works. She like Yellen, would have done well to have run a 7/11 for a year before spouting off nonsense that is destroying the Nation. This book, IMHO, almost crests the turning point for America, which now holds a debt of North of $31,000,000,000,000. This amount does not include the even bigger looming government committed trillions coming due through the coming decade.

Globally the debt in an incalculable number somewhere in the quadrillions, (the published $300 Trillion is nowhere near total reality). And yet, the Global GFP is only around $85 Trillion, or so. Where, when, or who will pay back the absurd debt? Who will pay the interest? The America-destroyers answer, “More Debt” and more government.