The Biden family financial follies have been screaming corruption 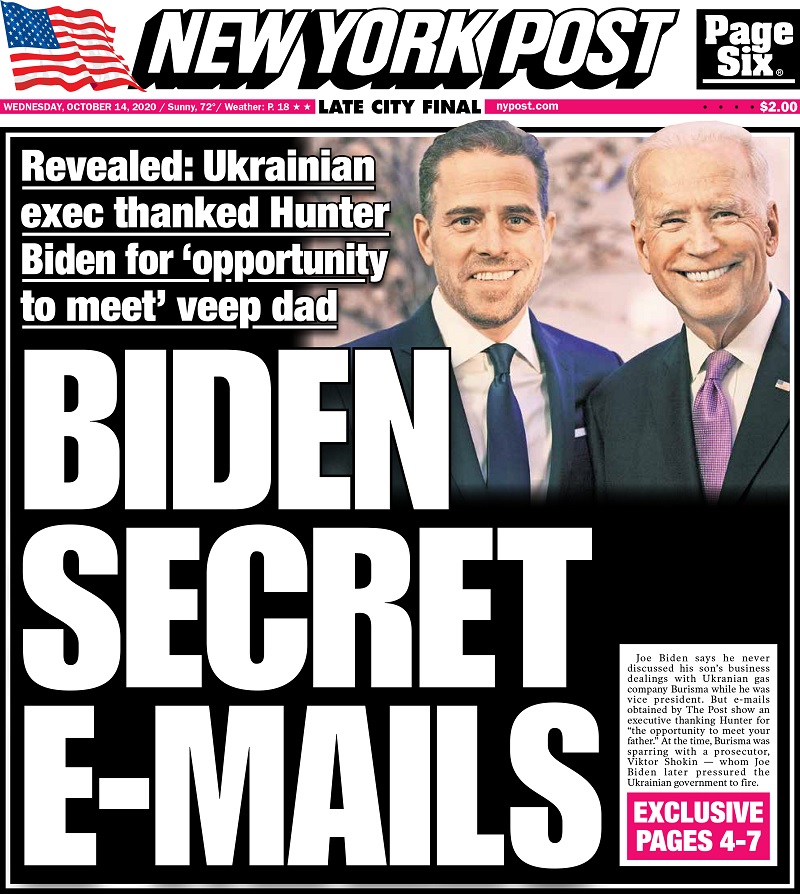 The level of corruption at the DOJ is unimaginable. The FBI’s hatred of Donald Trump has put the country in jeopardy.

Today the Daily Mail posits itself as having “broken” the story of the Hunter Biden laptop.

EXCLUSIVE: Shocking evidence against Hunter Biden revealed: Emails, texts, and photos that could land president’s son in federal prison for failure to declare income from foreign business deals and admit he was a drug addict on gun application

This follows the Washington Post publication of the same story.

Absolutely none of it is new. Not one bit. It has all been available since the NY Post reported it in October of 2020. But it’s real now that the Washington Post is getting leaks from the DOJ.

The NY Post had it all. It even had Tony Bobulinski.

The Daily Mail spends a lot of time talking about Hunter Biden’s lying on a gun permit application.

However, not all cases are prosecuted. Of the 478 referrals for ‘lying and buying’ the Justice Department received in 2018, charges were filed for 298 cases, about 60%.

But this isn’t the story. The real story is about something called a Suspicious Activity Report:

A Suspicious Activity Report (SAR) is an instrument under the Bank Secrecy Act (BSA) of 1970 for observing suspicious activities. SARs can envelop almost any activity that is unusual. An activity may be included in the SAR if the activity give rise to a suspicion that the account holder is attempting any illegal transaction.

The financial institution has the authority to file a report within 30 days concerning any account activity they adjudge to be suspicious or unusual. A 60 day extension may be applied if necessary to collect more evidence.

The purpose of a SAR is to report known or suspected violations of law or suspicious activity observed by organizations to the local financial intelligence unit or FIU. It does not have to be a direct connection to a predicate offense. That is for law enforcement to determine. You may not be able to link a SAR to terrorist financing but only to unusual behavior, but law enforcement may discover that key piece of information that defines the link.

But why do you need to file SARs? You may be thinking that SAR filing is like other financial crime prevention activities and should be the job of law enforcement. Organizations, especially financial institutions, are in a unique position with direct access to customers and transactions. This knowledge of customers and transactions is a crucial information source for law enforcement. The information from a SAR can initiate investigations, help with existing intelligence, and provide a missing piece in broader criminal or terrorist investigations.

One SAR is very concerning. One SAR can end a career. The Biden family has had more the 150 SARs filed against them.

Those voluminous reports have been in the hands of the FBI and were part of the evidence used by the Senate Homeland Security Committee for its bombshell 2020 report that flagged ‘millions of dollars in questionable transactions’ and national security concerns over Hunter’s foreign business dealings.

The FBI has had all of this since 2019. Corruption has been very good to the Biden’s.

Emails and documents from Hunter’s laptop show he made at least $11million from his overseas deals between 2013 and 2018 – and the total he got from Chinese businesses alone has been estimated as high as $31million.

And don’t forget the 10% for the big guy. If you really want a thorough examination of how awful the Biden’s really are, grab yourself a copy of Miranda Devine’s “The Laptop from Hell.” If you thought Hunter Biden was a scumbag, you’d be underestimating him. He’s way beyond scumbag. He is depraved.

The laptop together with Tony Bobulinski make a pretty airtight case against the Biden family corruption. That it has gone this long without any serious investigation is in itself a major crime. So why now?

The country is in the toilet. Biden is a lying machine, and so is the Cabbage Patch Doll known as Karine Jean-Pierre. The US is losing its sovereignty and Biden is pushing the country toward war with Russia. The White House has to continually issue statements to walk back things Biden says. Biden is draining the Strategic Petroleum Reserve to try to save democrat candidates and China is buying. Should we ever find ourselves in a war, one wonder where from where the oil for the military will come. To cripple the US, China need only buy up the SPR.

We should not be in this precarious position. Biden should never have been elected. The 2020 election was rigged. Had people been properly informed of the depth of the Biden family corruption and the FBI done its job the skies would be far sunnier.

China has been grooming Biden since 2011, when he was Vice President and subsequently Hunter made sure the CCP had continual access to Biden. The CCP had to be deliriously happy when Biden became President as everything about the green economy makes the US dependent on China. Now China’s investment in the Biden family is providing a fabulous return. The CCP has the goods on Biden and he knows it. Biden’s foreign financial follies and the DOJ’s failure to do its job have put the country in peril.

Meanwhile, here’s something to lighten the mood.

Anyone else notice that every time Zelensky cries, Biden sends billions, what leverage does he have? Why are we rushing into a possibly nuclear conflict because of it? 150 SARs are not enough to prosecute, even if he is a sitting president?

I wonder if the FBI has thought to compare those SARs to the tax returns of the Biden’s?

What skeletons Biden has in his Closet

They aren’t even IN a closet. Yet, there is no outrage, no (serious) investigations, no prosecution.

However, not all cases are prosecuted. Of the 478 referrals for ‘lying and buying’ the Justice Department received in 2018, charges were filed for 298 cases, about 60%.

So, the President’s son lying on a federal form to purchase a firearm, while addicted to crack, while Democrats think one of the silver bullets that is sure to cure gun violence is “universal background checks” yet don’t even raise an eyebrow when one of their “favorite sons” lies about drug addiction to get a gun? And old, really, really worn out trope (because the left offers so many examples), but what if Trump Jr. had done this? Or Kushner? We really don’t have to wonder. The FBI raids would have begun as soon as such a thing was suspected.

I know the left thinks the corrupt liberal media will do everything possible to hide everything they do, but they also know some of it inevitably leaks out. So, looking at the next level of “we’re telling you to do that, but WE’RE doing THIS, and F**K YOU if you don’t like it”, it’s obvious how elite the liberal elite think they are. Now that they have the IRS and DOJ in their hip pocket, they can do absolutely anything they want to do.

The evidence, at least for for a very high level of suspicion (for higher than ever existed to investigate Trump, non-stop, for 6 years), has been available since long before the 2020 election. Again, the media steps forward to protect and defend… corruption and make sure it gets more access to government influence. 17% of those who actually really voted for idiot Biden have said they wouldn’t have had they known of the laptop, so that means 17% more fraud would have been required to drag that garbage bag of dirty laundry over the finish line ahead of Trump.

There is no possible excuse for this but corruption. If this corruption is not removed, the nation is truly doomed.