The Hunt for White Supremacy 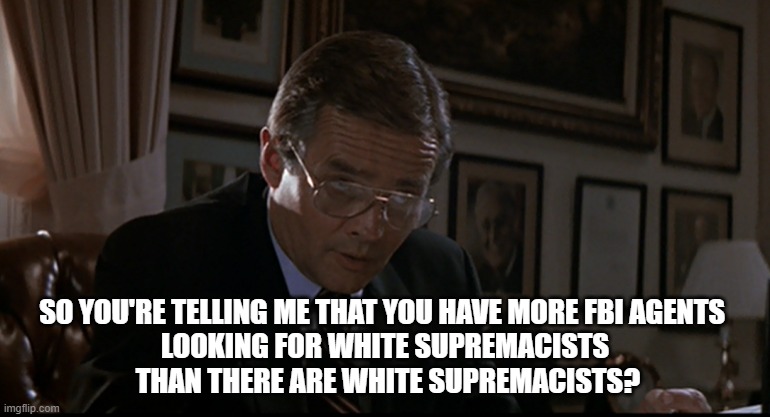 How many times have you heard it? The greatest threat to this country, aside from Republicans, is white supremacy (which also means Republicans, white, brown or black).

“We won’t ignore what our intelligence agencies have determined to be the most lethal terrorist threat to our homeland today: White supremacy is terrorism,”

The Department of Homeland Security has assessed that “the greatest terrorism-related threat that we face in the homeland is the threat of domestic violent extremism,”

(Mayorkas is on a crusade to eliminate white people in this country.)

Attorney General Merrick Garland told Congress on Wednesday that violence incited by white supremacists poses “the most dangerous threat to our democracy.”

Biden’s Fourth Reich needs something to make people believe this bullsh*t. Enter the FBI. The weaponized FBI has been cooking the books in an effort to try to support the outrageous and false accusations by the Biden Gestapo.

Rep. Jim Jordan (R-Ohio) said in a letter to FBI Director Christopher Wray that the “manipulative case-file practice” was being conducted by the bureau’s Washington field office, which was instructing local FBI offices to open up cases on their books that were in fact simply related to the Capitol breach.

“The FBI’s case categorization creates the illusion that threats from DVE are present in jurisdictions across the nation, when in reality they all stem from the same related investigation concerning the actions at the Capitol on January 6,” Jordan wrote.

The FB has taken sides against the right

More than 100 pro-life organizations, pregnancy centers and churches have been victims of arson, vandalism and threats since May when someone leaked a draft of the Supreme Court abortion decision Dobbs v. Jackson Women’s Health.

It gets darkly humorous

“The demand for White supremacy” coming from FBI headquarters “vastly outstrips the supply of White supremacy,” said one agent, who spoke on the condition of anonymity. “We have more people assigned to investigate White supremacists than we can actually find.”

That’s really kind of funny. It’s also sad and dangerous. Real crime is being ignored. The FBI has no interest human trafficking going on at the southern border. It has no interest in the fentanyl that kills 300 people every single day. One gutsy whistleblower was forced out of the FBI because he could no longer participate in malicious, deceitful and unconstitutional plots against Americans.

He is not a Trump voter.

He says he was removed from active investigations into child sexual exploitation and human trafficking to work on J6 cases sent from DC. He was told “domestic terrorism was a higher priority” than child pornography. As a result, he believes his child exploitation investigations were harmed.

His allegations are astonishing

This is positively bone chilling and frightening. It’s unlawful. This is what the Biden regime has done to law enforcement. The FBI is now a wholly owned subsidiary of the DNC.

The claims about crimes by white supremacists often depends on a report from the Anti-Defamation League, which actually defames white people. For a good fisking of the ADL, see here. In part it says

On the surface, the crimes would appear to have little more in common than their brutality. But the Anti-Defamation League includes these murders by white men of other whites in its tally of right-wing and white supremacist murders in its report, “Murder & Extremism in the United States in 2021.”

“In 2021, white supremacists were responsible for more murders than any other type of extremist; in many years, they comprised an outright majority of the extremist murders that year,” the report said. “Indeed, over the past 10 years, white supremacists have committed 244 (55 percent) of the 443 killings that the ADL (COE) has documented.”

For the moment let’s take their exaggerated number and put it into context.

Like other organizations tracking extremism, the ADL rarely offers context to claims regarding extremist murders by comparing them to broader homicide statistics. During the same 10-year period cited by the ADL in its 2021 report citing 244 murders by white supremacists, there were at least 165,000 murders in the U.S., meaning those the group attributes to white supremacists accounted for .001 percent of such violent deaths in that decade.

That statistic pales in comparison with those of major cities that have seen shocking increases in bloodshed, with recent annual murder totals breaking or nearing records set in the 20th century. Chicago had 797 murders in 2021, the highest total in 25 years, while much smaller Minneapolis, one year after George Floyd died in police custody there, had 96 murders, one shy of the city’s 1995 record. Huge jumps in murders also occurred in Philadelphia, Los Angeles, and other metropolitan areas.

Democracy is in peril, but it’s Biden who is gutting it.

The only White Supremacists I know of work for the Bureau.

[…] Flopping Aces: Where are all those White Supremacists? […]

The new boogyman. The biden regime is banking on their base, the low information voter, (greg/michael) to be all in, hook, line and sinker.

The white supremacy numbers are smaller than the gender confused community.

First, to head off people like Michael who like to misconstrue a comment and take the whole thing off on a tangent, there ARE white supremacists. There ARE klansmen. I’m not denying their existence.

However, up until recently, when all it takes to be a white supremacist is for some leftist to designate you as one, there was practically NO “white supremacist violence”. When was the last time the Klan committed a lynching or beating of some minority?

On the other hand, when was the last time ANTIFA committed violence? How about “Ruth Sent Us”? What about “black supremacists”? The threats of violence, violence and terrorism emanates from the left.

For 9 solid months, BLM/ANTIFA carried out a pogrom of intimidation, violence, riots and looting. They launched coordinated attacks on federal buildings and city police stations. The have a communications network that enables them to assemble in numbers, with weapons, to assault specified targets. Yet, the FBI is not investigating or infiltrating them and whenever a member happens to get arrested, they have their charges dropped without prosecution.

BLM has now been exposed as nothing but a scam to allow its leadership to buy properties, mansions and live the good life on donations. Yet, they aren’t investigated or shut down. No doubt it would be “racist” to infiltrate and prosecute BLM.

So, beyond any possible argument, the FBI is being manipulated to act as a political enforcement arm of the DNC and enact their policies and agenda. No doubt the CIA is being similarly used.

Why are they not doing anything about Antifa and BLM anyway?