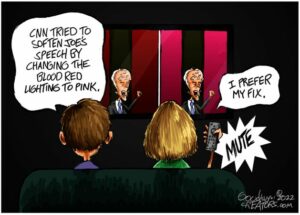 Welcome back! Now that things have settled down we’re back into our weekly routine. And our Lefty pals have no shortage of material for us. But first, let’s jump into The Wayback Machine of three weeks ago:

Don’t write off Pelosi’s nephew – he’s an opportunist and has some strong backing. Now would be the time to start sounding the alarm.

9/9 – A Democrat Politician Is Accused Of Killing A Journalist. Reporter Blames Trump (H/T Deplorable Me)

There was a time that this should be surprising, and we are long past those times.

This has to happen. If there’s one thing we’ve learned about our Lefty pals, the only way to get them to stop bad behavior is to make them take their own medicine. Remember, “Both sides need to stop!” Is just Leftspeak for “OK, we were wrong but it was cool as long as it wasn’t getting done to us”

Longer than our standard fare, but when it’s Victor David Hansen it’s worth your time

9/12 – Green Globalism is the Ultimate Expression of White Supremacy

Another long one of Naomi Wolf’s essays on her red pill journey. Like previous ones I’ve posted, it’s a good read.

9/13 – For the Love of God Will You Please Stop Being Stupid?

Good post, but it assumes that Republican leadership wants to win and fight for our country

This is a tough one for me. The Libertarian in me thinks that all drugs shoudl be legal and managed as we do with alcohol or tobacco. Unfortunately what I’ve observed is that every place I’ve seen that’s legalized pot ends up reeking like a hippie music festival. Show me a place that has successfully implemented a weed legalization program and I’d be open to suggestions.

9/15 – Toilet paper is back at these Hawaii bathrooms

Not the most important story, but it’s the kind of under the radar news that’s part of a much bigger picture

9/16 – Republican voters who refuse to vote hurt everyone else

While I’m completely on board with the “We’re not voting our way out of this mess” crowd, not voting is just plain stupid. As our Lefty pals like to say, “Vote early and vote often!”

Who ever did this video. Freaking awesome. pic.twitter.com/r8PEMPxKk7

This weeks song goes out for those in Marthas Vinyard who had a 24 hour crisis like no other it was 911 and the holocaust and Dec 7th all rolled together. 48 of 5 million were suddenly dumped at the door!

And like any good Democratic Socialists, the Aliens in MArtha’s Vineyard have already been sent to camps where they could be easily conentrated.

MV has a 100% deportation score. Next, Governor DeSantis should charter 50 Venezuelans to Rehoboth Beach.

No one should be taken for granted, particularly someone from a state as experienced in election fraud, but governors use their executive experience as their qualification, and Newsome has quite a bit to answer for. Even when he makes some practical decisions, he only touts his far, far, far left positions because that’s how one survives in California.

9/9 – A Democrat Politician Is Accused Of Killing A Journalist. Reporter Blames Trump

Aw, you would have found this anyway. Democrats remind me of my eldest daughter and her cousin when they were babies. My daughter loaded her diaper, but blamed her cousin. Thankfully, she got over that and grew up to be conservative. With the Democrats now blaming Trump for keeping schools closed and causing children to fall even further behind in education, it is clear they know no limits of what failures of their own they will blame on others.

There has never been a more demonstrable example of the absolute necessity to impeach. Idiot Biden has racked up a long list of prosecutable offenses, from destroying our energy independence, to the botched Afghanistan withdrawal, to squandering the SPR to the debacle at the border. But, he needs to be REMOVED.

Well, they should worry. Destroying America is the goal. The left has amply shown they don’t care about people, only power.

9/12 – Green Globalism is the Ultimate Expression of White Supremacy

The entire purpose of the climate scam is to take full control. Leftists are racists, so of course they aren’t allowing anyone but whites to have a share.

If something can be wrecked, Democrats will wreck it.

9/13 – For the Love of God Will You Please Stop Being Stupid?

I think Republicans try to get along and concentrate on governing. The need to realize they have to get rid of the obstruction to governance before they can govern. They have to stop assuming they can negotiate with people that want to destroy them. It’s not about vengeance or settling scores; if they get the power to do so, they need to impeach and remove idiot Biden, Mayorkas, Buttigeig, Garland and a long list of others who work against the interests of the US.

Most of the homelessness is due to drug abuse, yet the left wants to facilitate drug use. Idiot Biden thinks the “stigma” of drug use is worse that a destroyed life.

9/15 – Toilet paper is back at these Hawaii bathrooms

Jeeze, yet another liberal success story.

9/16 – Republican voters who refuse to vote hurt everyone else

Since we don’t endorse political violence as the Democrats do, elections are our only options. I’m not really pleased with Cornyn, but if the alternative is a Democrat, at least I can rely on Cornyn 50% of the time. While I supported West in the gubernatorial primary, Abbott is not bad at all and certainly preferable to the moron Puto O’Rook. I will not cede my vote to a damned liberal, even if I know it is cancelled out by a fraudulent Democrat vote. But my vote is actually cancelling that fraudulent vote, allowing another vote for the survival of the nation to be tallied. We are on the verge of Democrats enacting policies that will make elections totally superfluous.