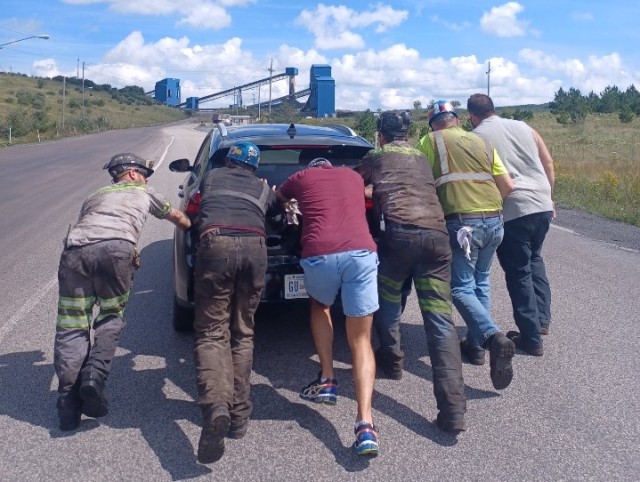 A recent event in West Virginia was dripping with irony.  Apparently, tourists traveling from DC in an electric powered vehicle (EV) laughed as they passed gas stations until they ran out of juice 170 miles into their journey. Ironically, their trip abruptly ended ended at the entrance to a coal mine. The DC folks in the dead EV stopped laughing and had to be rescued.

5 heroic coal miners saved the day by pushing the dead vehicle to their plant to be re-charged. Recently, our crack Commander-in-Chief set a goal that 50 percent of new car sales will be electric by 2030.  That’s another brilliant move by the same guy who abandoned Afghanistan in the middle of the night, stranding thousands of Americans in Kabul.  Then, dementia Joe sent 13 brave servicemen on an ill conceived mission into harms way where they died at the hands of a suicide bomber.  Joe failed to keep them safe and now jeopardizes Americas’ safety by refusing to close the southern border.  I digress.

Now, bumbling Joe is going to mandate an electric powered car in every garage across America.  Who made him king?  Sure Joe, in the middle of a recession (you caused), my family is going to purchase a $60,000 electric vehicle and a long extension cord.  Then….wait for it….the cost of electricity will mysteriously sky rocket and our tenuous electric grid will buckle.  How dumb do you think that we are?

My lovely wife thinks that I have become cynical in my old age.  Instead of criticizing another one of Biden’s blunders, I will only think positive thoughts about Joe’s latest turd floating in the punchbowl.

Joe just hired 87,000 new armed IRS agents which initially seemed really stupid.  However, those agents can be enlisted to push dead electric vehicles abandoned across America.  It took 5 coal miners to push one EV up the road.  It will take 10 armed IRS agents to accomplish the same task with a supervisor riding on the hood. Therefore, thanks to Bumbling Biden, 8,700 dead electric vehicles can be pushed to charging stations if any are available and have not been vandalized.

Also, criminals can easily load an app to identify available charging stations.  Now bad boys will know exactly where victims in dead electric vehicle coffins will be stranded for at least 30 minutes. This is a tremendous bonanza for predators-the marks will be trapped and begging for mercy.  The cops will be unavailable because they were DEFUNDED.  Ringing any bells?

Also, Biden handed voters another reason to vote Republican this November and in 2024.  The main plank in the Democratic platform is WE HATE TRUMP AND YOU SHOULD TOO! That’s pretty much their entire game plan strategy, except for cheating.  How else are Democrats ever going to win another election?

The Democratic Party is as dead as that electric vehicle those coal miners were pushing down the road.

Don’t be  a deadhead-Vote conservatives into office who love America, our constitution and all of our wonderful people from sea to shining sea!

97% of all California’s electric vehicles are still on the road.
The other 3% made it home.

Remember the debacle just a few days ago where Colorado residents were locked out of their thermostats?

Guess what feature EV ‘Smart’ chargers are equipped with?

Yep, they can be remotely disabled at times of ‘grid stress’.

Or, you know, if the lefties decide you shouldn’t travel.

This is not the newest latest and greatest technology.
There were electric busses in London and France 1830s.
https://www.prewarcar.com/edison-s-electric-cars
Yes Edison had several cars his battery seem superior to todays.

Why didn’t Joe Manchin stop by to help push?

@old guy
Nah, he just drove by and told them he was supporting them all the way.

You know, if they pushed it long enough, it would recharge the batteries. Those things, even the small ones, aren’t light. My daughter’s Tesla ways as much as an F-150 (non-electric).

There’s a parody going around of a North Korean newspaper showing a satellite photo of California at night……with all of those counties in utter blackout everywhere.

@Nan G
When a massive winter storm knocked power out around Texas in 2020, leftists here complained that Texas was not connected to the national grid. If we were, parasites like California would be drawing off our electricity because they are too damn stupid to provide their own power needs. Mandating more electric cars only adds to the stupidity.

This isn’t progress. Check out the range and the re-charge time. Charge time is manufacturer estimate using the best possible charger. Which of course won’t be the norm. Hope there’s plenty of coal miners available to push.

All Electric Semi Truck Models in One Graphic

0
Reply
Deplorable Me
Reply to  Mully

@Mully
Electric cars have been around since cars were built. The technology is not prepared to replace fossil fuels; possibly, it never will be.