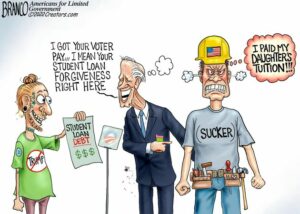 Welcome back, everybody! So… did I miss anything? I’m actually not ending my August News Cleanse until after Labor Day weekend, but since I missed last week (for reasons I’ll explain next week when I’m fully back) I wanted to at least serve up a quickie. So let’s get to it:

Since I’m still not completely back, i won’t be jopioning the conversation in the comments section. But I’ll be back next week – enjoy your Labor Day weekend, everybody!

“I’m coming for your guns, and my government will kill you with F15s” -guy against fascism

When they find out that permanently mutilating their bodies didn’t solve all their problems, I imagine the depression is far worse.

We know, though. We know. However, I think this will be overturned.

Do they actually get their brains back after they leave the regime?

I wonder how much Russia is kicking in on promoting this national stupidity?

They need to be referred to as “Persons formerly possessing their genitalia”.

Democrats oppose having armed officers in schools to protect children but want 87,000 more armed IRS agents to go after those not claiming all their income. It’s pretty clear where THEIR priorities are.

Why don’t they target the children of far leftists so the propagation of that species can be choked off?

Obama also screwed over Iranian hostages that had already won a judgement against Iran for their illegal imprisonment. It simply seems they favor ANYONE over a US taxpaying citizen. I wonder how much crack money Hunter is getting out of this?