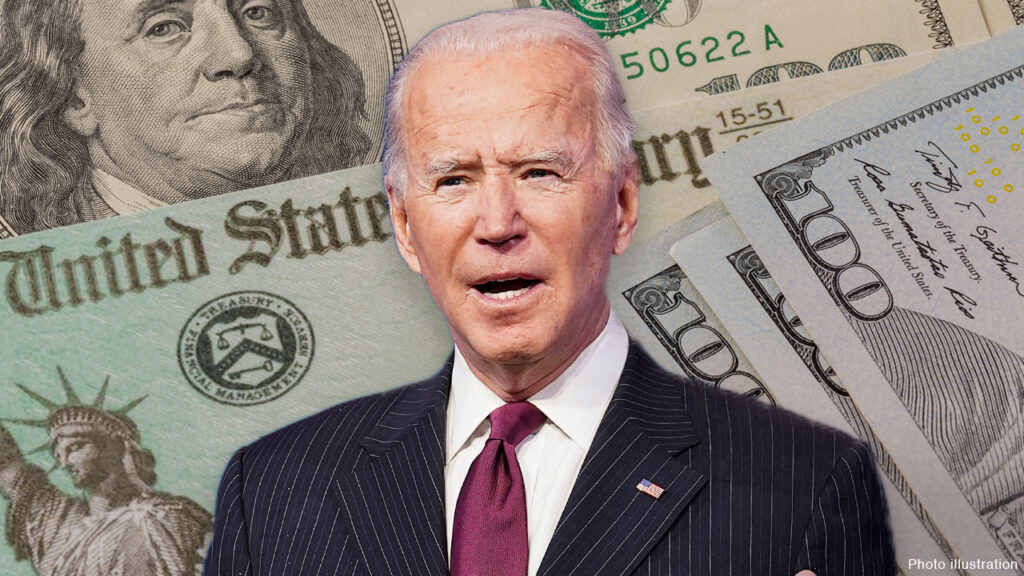 It’s no mistake that Biden is coming out with his student loan cancelation plan at this time- just before midterms. It’s a baldly obvious effort to cement the whiny socialist mooch vote that he already had but it comes at a great cost to everyone who either paid for their own educations or didn’t go to college.

President Biden caused an uproar Wednesday by announcing that his administration will forgive billions of dollars in federal student loan debt, potentially wiping the financial slate clean for 20 million Americans — despite Republicans and experts warning the bailout would worsen America’s tenuous economic situation.

In unveiling the plan to write off up to $20,000 in student loan debt incurred by borrowers who have received federal Pell Grants for their education and make below a certain income, along with up to $10,000 in debt for non-Pell Grant recipients, the president insisted that “an entire generation is now saddled with unsustainable debt.”

So how much will this really cost? Let’s ask Susan Rice

Another word salad from KJP.

The Biden White House has absolutely no idea who will pay for Biden’s $300 billion student debt bailout. pic.twitter.com/e1m10VSWhZ

“How much does this cost?”

Education Secretary Cardona: “The projections are still coming out”

Cardona: “Those projections are still coming out”

“How will this be paid for?”

Cardona: Biden “has been very clear about reducing the deficit” pic.twitter.com/R4JAIATzcQ

Liberals spent this morning struggling to find a moral equivalence between student loan bailouts and COVID/PPP and natural disasters. The latter two were not choices. Fauci killed the economy with an unnecessary shutdown of the country during COVID. No one chooses to be hit with a hurricane. Student loans all come by choice as part of the secondary education scam. Now plumbers and electricians and those who did pay their debts will bail out the art history, philosophy and gender studies majors.  Sen. Fauxcahontas, may I ask you a question?

“I’ve saved all my money. [My daughter] doesn’t have any student loans. Am I going to get my money back?”@eWarren: “Of course not.”

“So you’re going to pay for people who didn’t save any money and those of us who did the right thing get screwed.” pic.twitter.com/eqK7o4Cl9Q

A lot of people have a problem with that

New Yorker: “I paid for my student loan, and everyone else should pay for theirs, too.” pic.twitter.com/cgx3XVSTEi 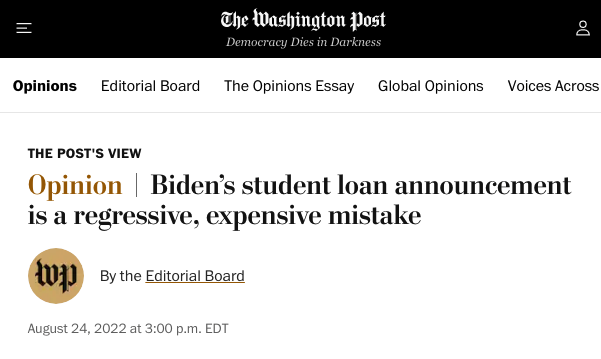 Eric Swalwell threatened to “torch” MTG over her PPP loan

Dear GOP colleagues, before you offer your hot takes on student debt relief, please make sure you or your colleagues didn’t have one of your government loans forgiven. Otherwise, I will absolutely scorch you.

Yes, I’m looking at you @RepMTG.

Sounds like he’s threatening to bare his Fang Fangs

Biden hasn’t had much to say recently. There’s a reason for that. Here he says that black and Hispanic people don’t own homes

BIDEN: “Black and Hispanic borrowers…they don’t own their homes to borrow against to be able to pay for college.” pic.twitter.com/81HVi8CPMq

It appears that we may finally to be coming out of the campaign on the left to “pack the court” with a liberal majority. That is good news. The problem is that many on the left have turned their ire on the Constitution itself as the root of all evil in our country. In a New York Times essay, law professors Ryan D. Doerfler of Harvard and Samuel Moyn of Yale are calling for the Constitution to be “radically altered” to “reclaim America from Constitutionalism.” In order to accomplish this dubious objective, they call for shifting from the “Pack the Court” to “Pack the States.” The attack on “constitutionalism” is chilling but these professors are not the first to lash out at our Constitution as the scourge of social justice.

The New York Times column called for citizens to view the Constitution as the real enemy and to push to “radically alter the basic rules of the game.” The attack on our Constitution has become something of an article of faith for the far left in recent years.

An Obama economic adviser has called this “reckless”

“Pouring roughly half trillion dollars of gasoline on the inflationary fire that is already burning is reckless. Doing it while going well beyond one campaign promise ($10K of student loan relief) and breaking another (all proposals paid for) is even worse,” said Furman, “The White House fact sheet has sympathetic examples about a construction worker making $38K and a married nurse making $77,000 a year. But then why design a policy that would provide up to $40,000 to a married couple making $249,000? Why include law and business school students?”

The effect on tuitions? Well, when Biden announced a $7500 tax credit for EV’s, Ford raised the price of its electric pickup by $8500. That’s what will happen with tuitions. Biden is paying them back for their generous contributions. All with your money.

What will this all really cost? Anywhere from $300-980 billion over 10 years. Given all small print carve outs it is likely to go over a trillion dollars. 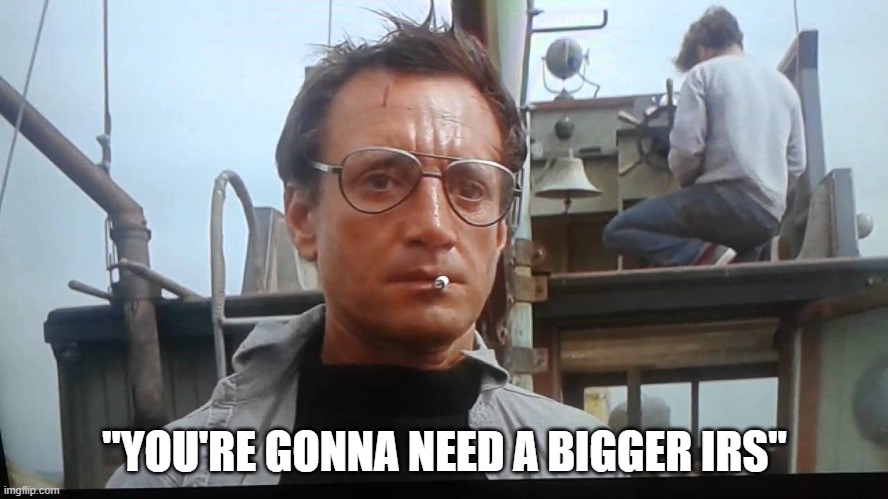 That comes to at least $4-6,000 per taxpayer. What about the effect on the deficit? No problem, says KJP

FACT: It will increase the deficit by more than $350 BILLION, according to the Tax Foundation. pic.twitter.com/Jh0aFTvfRg

Yeah. And if you get vaccinated you won’t get COVID.

When asked if this was fair to those who paid their debts, Biden just walked away.

Biden is asked, “Is this unfair to people who paid their student loans or chose not to take out loans?”

He has no answer. pic.twitter.com/VbzUSFGnIR

And just wait until you see what this does to inflation.

This brings me to something I’ve been wanting to say for some time. You will notice that the White House rolled out special people to explain this because Biden sure as hell wouldn’t be capable of fielding appropriate questions; Susan Rice and Ron Klain.

Ladies and Gentlemen, meet the real President. The Presidency is divided into two persons. 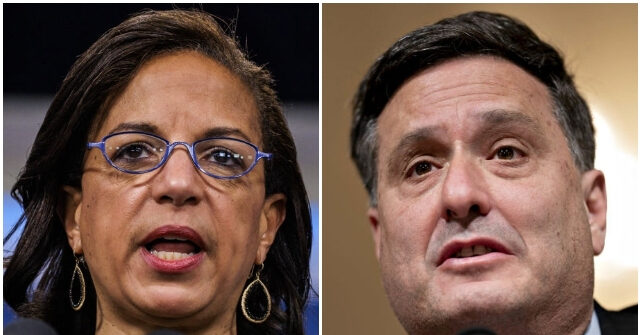 They are the ones running the show. They tell Biden what he’s thinking and what he should say. They also do their best to deflect the truth. Rice was part of the plot against Donald Trump. She spent many a day unmasking Americans to spy on them.

And over at DOJ Lisa Monaco is in charge, not that weak kneed Merrick Garland. Monaco is running the Jan 6 pogrom against Trump supporters. She probably gets advice from John Carlin, who joined the Biden regime as the Acting Deputy Attorney General for Biden in 2021.

It was John Carlin who ultimately facilitated the fraudulent FISA application against Carter Page in order to continue surveillance of the risk represented by Donald Trump. John Carlin’s legal counsel in the NSD was Michael Atkinson.

That is who actually controls the US today. We’re in trouble.

There is a lawless and illegitimate regime in control of the country. They are all guilty of treason and should be hung or shot.

Another clear example of your idiocy, Comrade Greggie, is the fact that you rely so hard on YouTube crap to make your arguments for you.

Shall I present a video of the murder of Ashli Babbitt by a black CPD officer to use as an example of black supremacy in the U.S.?

Soros is an atheist. He spent the happiest days of his life ratting out other Jews when he was a child.

You can drop that one, Greg.

Uh, that’s about a ten-year-old projection by Leftist creeps who can’t explain why a Billionaire Globalist is being allowed to buy our public offices.

I’m rather sure you live a bit closer to Soros, and Schwab, than any of us.

Hope you chopped to wood for the winter, pal. It’s going to be a long one for you without that Russian oil.

@Greg
Of course, NOTHING hides Democrat anti-Semitism. You elect them into Congress and celebrate them. Anti-Semitism among Republicans does not exist. “At least 55 of the largest corporations in America paid no federal corporate income taxes in their most recent fiscal year despite enjoying substantial pretax profits in the United States.”

Many lower income people WILL see their taxes increase. Because of Biden? Nope. Because Trump’s tax cuts were scheduled to phase out for lower income household from the very beginning, while cuts most affecting high-earning households were permanent. That’s the way the legislation was written.

Many lower income people WILL see their taxes increase. Because of Biden? Nope. Because Trump’s tax cuts were scheduled to phase out for lower income household from the very beginning, while cuts most affecting high-earning households were permanent. That’s the way the legislation was written.

And THAT’S because Democrats would not support the bill (it needed some Democrat votes in the Senate) unless the individual tax cuts were limited. So, yeah, that’s f**ked up, but that’s what Democrats always deliver.

Taxes will go up solely because of idiot Biden and Democrats, and not just income taxes. The tax increases on EVERYTHING put in the Inflation Inflation Act will be an added tax on all Americans.

You mean like Mark Zuckerberg who spent over $420 million to rig an election in favor of Joe Biden?

How many of the ten wealthiest people in the U.S. support the Democrats? You never mention that. Why is that?

That’s the way the legislation was written.

How about citing the legislation? You know, the Bill number? Or can you only parrot what you are told?

I see you finally discovered the pareto principle.

Biden’s occupation has been a disaster for us all, causing more poverty, death, and violence as a consequence.

Given the 1% vote Democrat, and pay to have people like Biden installed, I’m rather sure they will not feel a thing.

@Greg
1. I guess you don’t understand how depreciation and investments works. Which is used against tax burden.
2. Corporations just pass along tax burden to their customers.
3. Joe Biden has been in DC for at least 5 decades. That’s over 18,000 days. Why hasn’t he fixed this yet, if it’s such a problem? He was VP for 8 under Obama and didn’t fix it.

4. Trump capped SALT deductions to 10k which means he RAISED taxes on the rich. Meaning Democrats, who hated it and whined to get it reversed.
5. The last bill Biden signed into law, the so called IRA, left a big loophole for Democrat donors in place. The carried interest loophole. They could have closed it and some said they wanted to, but when the rubber met the road they took care of their big donors.
https://www.commondreams.org/news/2022/07/31/sinema-opposing-tax-hikes-rich-progressives-say-carried-interest-provision-must-stay