Biden not only knew about the raid on Trump, he helped plan it 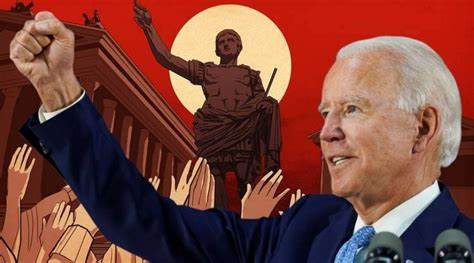 If you wondered why Joe Biden has been absent from the job for the last two weeks, wonder no more. Biden was part of the scheme to raid Donald Trump. Remember how Biden claimed to have no knowledge of the Trump raid?

President Joe Biden’s staff claimed Monday they did not know about the FBI raid on former President Donald Trump’s house at Mar-A-Lago. “No advance knowledge. Some learned from old media some from social media,” a senior White House official told CBS reporter Ed O’Keefe when asked about the raid.Fox News journalist Pat Ward also cited a comment from a White House official denying they did not receive notice of the raid and referred reporters to the Justice Department.

Surprise! He’s a damned liar. Biden was one of the plotters. In an historically unprecedented move, Biden waived all Trump’s executive privilege.

Long before it professed no prior knowledge of the raid on Donald Trump’s estate, the Biden White House worked directly with the Justice Department and National Archives to instigate the criminal probe into alleged mishandling of documents, allowing the FBI to review evidence retrieved from Mar-a-Lago this spring and eliminating the 45th president’s claims to executive privilege, according to contemporaneous government documents reviewed by Just the News.

Trump was cooperating with NARA all along

The memos show then-White House Deputy Counsel Jonathan Su was engaged in conversations with the FBI, DOJ and National Archives as early as April, shortly after 15 boxes of classified and other materials were voluntarily returned to the federal historical agency from Trump’s Florida home.

But then Biden decided to torpedo Trump

By May, Su conveyed to the Archives that President Joe Biden would not object to waiving his predecessor’s claims to executive privilege, a decision that opened the door for DOJ to get a grand jury to issue a subpoena compelling Trump to turn over any remaining materials he possessed from his presidency.

“The current president should not be able to waive the executive privilege of a predecessor, without the consent of the former president. Otherwise, [privilege] means nothing. What president will ever discuss anything in private if he knows the man who beat him can and will disclose it.”

In turn, Trump has sued the FBI to allow for a special master to review the materials

Former President Trump is seeking to temporarily block the FBI from reviewing the classified materials seized from his home, asking the court to appoint a “special master” in the interim to help them review the evidence collected as they executed a search warrant.

In a 21-page motion that echoes much of the former president’s claims that the search was politically motivated, Trump’s attorneys ask for outside oversight to ensure the materials seized from his home do not include items they argue could be protected by executive privilege.

The suit asks for the court to enjoin the FBI from reviewing the evidence it has collected until a special master is appointed.

“It is unreasonable to allow the prosecutorial team to review them without meaningful safeguards,” Trump’s attorneys write.

Trump’s attorneys claimed to have been cooperative

Trump’s attorneys contend this means he was “fully cooperative” and complain that the Justice Department “has refused to provide President Trump with any reason for the unprecedented, general search of his home.”

Over to you, DOJ

This is outrageous. The left has frequently whined about Trump being a dictator, but it remains true that the left always accuses the right of its own crimes. And all the while the DOJ/FBI is leaking to the NY Times. It’s Russian collusion all over again, only this time a fascist President is using the government to destroy a political opponent.

Biden is now officially a dictator. Trump’s rights go down now. Ours go soon after. If there is another Presidential election, it is incredibly important than Biden lose. Then the next GOP President can unseal everything about Biden and Obama. That would be a great day.

And if I didn’t say it before, Biden is a damned liar. An execrable putrid liar.

I told you so.

Presidents have infinite automatic unilateral control over their own presidential documents. Period. Forever. The entire circus is globalists spy chiefs backstopped by a complicit MSM. What Trump has are not “library documents”, (lol), what Trump has, is proof that key Never-Trump insurrectionist Peter Strzok was never “an FBI agent”. Strzok went directly from the military to a White House assignment without ever attending Quantico or ever being assigned to an FBI office. Strzok is a walking/talking CIA Domestic Operations Violation used to tamper with a US Election, and then in Recorded plotting further to trammel and attempt to overthrow a legitimate US Presidency. The Mar-a-Lago raid was a Desperate attempt by his bosses to confiscate Trump’s evidence.

The head of this snake is none other than obama, mark my words. This is the last effort to prevent a full-on transparency of the administrative state. They cannot allow President Trump or any other America First presidential candidate near the presidency for fear of total exposure to their fascistic behavior.

The spying and undercutting of Trump was begun by Obama. When the documents are revealed it will be shown that just as in every other case, the Democrat White House is LYING when they feign ignorance of plots against a political opponent. Obama is in this up to his twat and he doesn’t want his “legacy” soiled by yet another scandal.

OMG you guys are too funny

Enjoy the ride down, morons

When a bad guy kills someone he rarely is taken over by pangs of guilt and runs to police to confess and be punished.
The stealing of the election and the attempted thwarting of Donald Trump’s entire time in politics included a few murders and killings.
Seth Rich.
All those killed by the “diversion” of the BLM riots.
All those killed by the created “crisis” of the covid cold.
That’s millions of victims.
Bad guys don’t feel sorry and turn themselves in, they “double down.”
Hence armed IRS agents but friendly Border agents.
Hence Eric Holder’s new “army” of poll watchers and ballot counters.
Hence our inflation, food shortages and supply chain issues.

I think joe is most “authentic” when he is screaming angry.

@Nan G
Idiot Biden is nothing but an incompetent, lying asshole.

Well, we all knew this would come out. Whenever idiot Biden speaks, you can be assured he is lying. Just as they claimed to have had nothing to do with the DOJ targeting parents concerned about their children being indoctrinated and groomed (when the teacher’s union went to the White House and demanded action), it was inevitable we would find out idiot Biden was lying about this.

“In its initial review of materials within those boxes, NARA identified items marked as classified national security information, up to the level of Top Secret and including Sensitive Compartmented Information and Special Access Program materials,” Wall wrote. “NARA informed the Department of Justice about that discovery, which prompted the Department to ask the President to request that NARA provide the FBI with access to the boxes at issue so that the FBI and others in the Intelligence Community could examine them.”

But… the FBI had already viewed the documents. It was THEY who took them back to the archives. How was what was in them a surprise to the FBI when NARA pointed them out? And, after the fact, a complete idiot in the White House can proclaim that Trump doesn’t have the executive privilege to declassify the documents AFTER the fact?

Idiot Biden and crackhead Hunter were definitely involved in the Burisma corruption. When Trump asked Zelensky to assure that the corruption was being investigated and no more US aid money was being syphoned off by criminals, he was impeached. What will the punishment for idiot Biden using the DOJ and FBI to target the political opponent he fears the most?

The raid was fubar, so it makes sense biden was in on the planning! 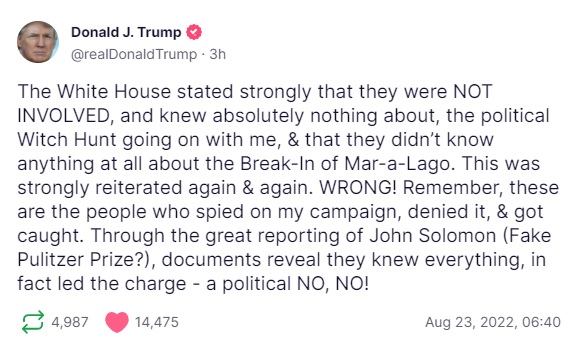 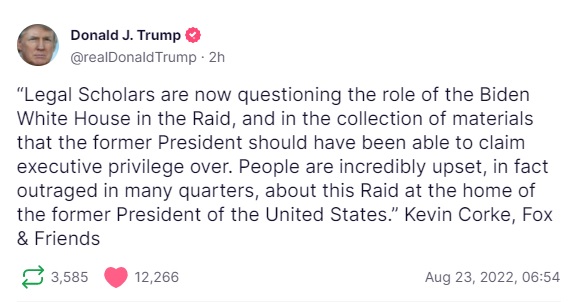 This is bigger than Watergate.

This also goes back to the obama years. And he was behind this as well

gayland did not have the clearance to initiate the “PANTY RAID” on Trump’s home. The final OK came from the useless pedophile

Trump had over 300 classified documents stashed in Mar-o-Lago.

If “declassification” was appropriate, why is he now suing to stop the FBI review of them?

There is no credible evidence President Trump has any classified materials in Mar-a-Lago.

The physical evidence is in boxes that are now in the hands of the FBI. They got a probable cause warrant from the court to go into Mar-o-Lago and take possession of it, as you may recall.

greggie as the hands down person to be crowned the village idiot, please enlighten the rest of us her at FA with a list of all the issues you have been proven to be correct. I am sure that will be worth a huge laugh.

I don’t believe FJB has the brain to put any input into the raid on Trump….I do believe that obama and the bitch clinton were involved some how with the raid….