The biggest scam in the Inflation Reduction Act 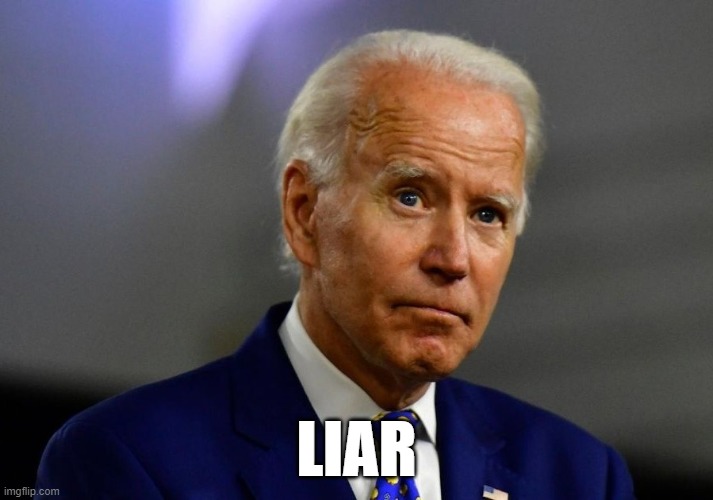 And, no one earning less than $400,000 a year will pay a single penny more in federal taxes.

Politifact says he said it.

Some people believe it. Thing is, anyone who knows Biden for any length of time knows that he an inveterate liar.

Since then, there are decades of his lies

‘If you get vaccinated, you won’t get COVID.’

The Southern border is closed.

“I have never spoken to my son about his overseas business dealings.”

Then we come to the fine print in the law.

Your taxes are going up. You have an excellent chance of being audited if your income is under $400,000 because that’s the money is.  Small minority owned businesses will be ripe targets.

All democrats are liars. Biden is the consummate liar. Memorize that. Keep it with you always. It will serve you well.

You left out “zero inflation in July”.

No, we won’t see a “single penny” in tax increase. We’ll see THOUSANDS OF DOLLARS of tax increase, along with the increase in the costs of goods and services when the corporations pass those tax increases along to the public.

Democrats know their constituency are the STUPIDEST of the stupid. Democrats rely on being able to blame someone else when their polices’ harmful effects come to light.

While it is in their nature to lie, Democrats HAVE to lie because their policies always result in failure and damage to the nation. But why wouldn’t they lie? Like the Politifact example, the media never calls them out and will scramble to cover for their lies.

Another gigantic lie in the Inflation Inflation Act is the tax credits for buying EV’s. The credit is contingent on the vehicle being US made with US components. That exempts 70% of them. A lot of people are going to be in for a very rude surprise come tax filing day, but apparently, getting screwed and screwed hard by the Democrats is the only way they will learn.

[…] Aces: The biggest scam in the Inflation Reduction […]

“Whoever controls the media controls everything”
It’s now legal to lie to the American people…… Smith-Mundt Act of 1948 (SMA): Put simply, our government was permitted to lie to people in other countries, but not to us here at home. The Smith-Mundt Modernization Act (SMMA), ………..BURIED in the 2012 National Defense Authorization Act (Obama’s term): REPEALED the 1948 Smith-Mundt Act: allowed the same propaganda disseminated by our government to foreign publics, to now be released in the U.S. for the very first time. OUR government is also now ALLOWED to CREATE PROPAGANDA tailored specifically for U.S. public consumption, using ANY media as it sees fit, while remaining ANONYMOUS as to the source of the material being reported. https://www.rcreader.com/commentary/smith-mundt-modernization-act-2012

0
Reply
Deplorable Me
Reply to  cb

They’ve certainly made the most of that.

[…] on Alaskan politics? Look no further than Bear Creek, where men are men and bears… aren’t.Flopping Aces answers the question: is the Inflation Reduction Act just another leftist shit sandwich?Climate […]

The IRS is going after Amish farmers.
https://thewashingtonstandard.com/amish-farm-under-threat-from-feds-for-refusing-to-abandon-traditional-farming-practices-video/
They are making it impossible for farming to even take place in the USA.
Deisel is so expensive some farmers are not going to be able to afford to run the machinery they use to harvest this Fall’s crops.
https://www.thetrumpet.com/25952-high-diesel-prices-may-prevent-farmers-from-harvesting-their-crops-this-fall
Think prices are high now?

And, so what IF they told the truth about “not raising TAXES on the Middle class?”
Taxes can be overt or covert.
Inflation is also a tax, just a hidden tax.
Raise taxes on the corporations and they must pass on costs to consumers.
Then you pay more for the same goods.

But, they do lie.
So, watch what they are doing.
They were caught training ARMED IRS agents how to take over the home/business of a LANDSCAPER who hadn’t been depreciating his used, old truck properly!
That’s not a “rich” person.
https://ussanews.com/2022/08/21/video-irs-coaching-college-students-on-how-to-arrest-small-business-owners/

The kicker is that while all those predictions that “climate change” will bring famine are making sure to bring it about by their attacks of farming and the use of fertilizers.

…Two of the largest reservoirs in America, which provide water and electricity to millions, are in danger of reaching ‘dead pool status.’ A result of the climate crisis and overconsumption of water, experts say.
—
Lake Mead, in Nevada and Arizona, and Lake Powell, in Utah and Arizona, are currently at their lowest levels ever. ‘Dead pool’ status would mean the water level in the dams was so low it could no longer flow downstream and power the hydroelectric power stations…

At what point does denial finally become impossible?

It’s global, not local. China just ran into something that could be even more devastating for its supply chains than COVID-19 lockdowns: A record heat wave

Stop these demons in their tracks.