Not Without my Daughter – What We’ve Lost as Americans 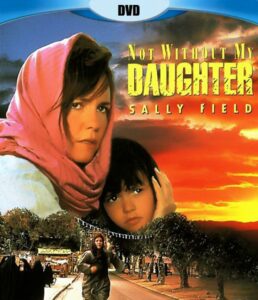 Welcome back friends and neighbors! As part of my month off from the news and with it my weekly “The Week in Radical Leftism” series I’m still leaving a few non-topical posts each week for the folks who are good enough to follow me each week. This week’s serving as a continuation of my informal series of “What We’ve Lost as Americans”. There’s no schedule to this series, nor any set topics I have planned to write about. I’ve previously written about how we’ve lost The Olympics as a shared American experince, amusement parks like Action Park, and movies like The Cannonball Run, a film set in an America that sadly no longer exists. Last week we dove into the great science fiction anthology from Robert Heinlein, The Past Through Tomorrow. Today we look at the 1991 Sally Field film, Not Without my Daughter (NWMD). To quickly summarize via Wikipedia:

Not Without My Daughter is a 1991 American drama film based on the book of the same name, depicting the escape of American citizen Betty Mahmoody and her daughter from her abusive husband in Iran. In 1990, the film was shot in the United States, Turkey and Israel, and the main characters Betty Mahmoody and Sayyed Bozorg “Moody” Mahmoody are played by Sally Field and Alfred Molina (Doctor Oc from the Spider Man movies for those unfamiliar – BB), respectively. Sheila Rosenthal and Roshan Seth star as Mahtob Mahmoody and Houssein the smuggler, respectively.

The story opens in 1984 with Betty and Moody as a happy couple living in Michigan with their daughter. Moody is a doctor at a local hospital, and is shown looking none too happy as he sits in the breakroom and has to overhear some fellow doctors making some anti-Iranian wisecracks (oblivious to his presense). The film does a nice job of setting the stage as a believable happy family whose father has some legitimate gripes with his work environment (and American culture in general). For any young people reading this, if what happened in the breakroom seems insensetive and unprofessional, well, it kind of is. But back in the early 80s the culture, and the workplace, was not on the same hair trigger that we have today. Second, memories of the Iranian hostage situation were still fresh in everyone’s memories. Anti-Iranian sentiment was still alive in America, and the breakroom doctors’ remarks weren’t out of line for their time.

The story progresses with Manny convincing Betty to bring their daughter to Iran for a family event. The film also takes its time of letting the tension build and for things to slowly but surely descend to a point where Betty is a prisoner in her home at the mercy of Manny. I’m not goint to go into a lot of detail, as I don’t want to spoil the movie for anyone who hasn’t seen it. It’s also not a spoiler to tell you that in the end, Betty escapes with her daughter, as the story would never have been told otherwise. And it is an impressive story. Even with knowing how it will end, the movie takes it time progressing Betty from a foreign but welcome guest with her in-laws who she is meeting for the first time, to a reviled foregner who has no place in an Islamic theocratic culture. You feel for Betty’s abuse, and despite knowing she’ll inevitably triumph you fear for her at every turn knowing that any misstep will make life that much worse for her and her daughter. Despite practically being a prisoner, she manages to make new friends, and you have no idea whether they’ll be reliable or end up turning on her. It’s a patient, well told story that’s well worth two hours of your time.

So how did we lose this movie as part of our culture? NWMD is very blunt in its depiction of the oppression of fundamental Islamic culture. We get an early look at what’s to come when a leisurely outing early in the Iranian visit results in Betty and Moodty being pulled over by an angry man and burka-wearing woman waving automatic rifles at Betty for being insufficiently covered. We go on to see domestic violence, mental spousal abuse, and a culture of subjugated women that the local women completely live and breathe. When was the last time we saw Hollywood show anything even remotely critical of Fundamental Islam? Off of the top of my head, I’m thinking around 20 years ago with a few shows such as 24?

Today’s Hollywood would never even dream of making a movie like this. These days, “subjugation” of women is being opposed to taxpayer funded abortions on demand for 13 year old girls without parental notification. And ever since the Middle East figured out that their money could be used to influence Hollywood and Washington, well, we’ve seen how the last two decades have turned out. One would think that a culture that doesn’t celebrate Pride Month or encourage abortions for women having sex otside of marriage would make for a ripe target for The Radical Left as opposed to their hatred for anything regarding Christianity. But, to paraphrase Han Solo, “Because Christians don’t rip people’s arms out of their sockets when you criticize their religion”.

I hate using this mealy mouthed wording, but as I re-read this post during the editing process, I can’t tell if what I wrote makes me come off as an “ist” or a “phobe”. So I’ll just say it – one good piece of spending the last two decades in the DC area is that I’ve gotten to know a number of folks who practice Islam, something I hadn’t seen anywhere I’d lived prior to being here. Some of the Muslims I’ve met have been terrific people. And some have been complete sphinchter muscles. Just like anyone else. Hopefully that didn’t come off as a weak backpedal, but I felt it needed to be said. By all means, blast me in the comments – happy to respond when I return in September.

But I’d love to see Hollywood have the courage to actually stand up and condemn a culture that openly despises everything that The Radical Left values. The one exception being anti-Americanism, and sadly that seems to be their common ground.

Admin Note : I’m actually using August for a month long “news cleanse”, and I won’t be joining the conversation in the comments nor in the feeds as I always do. Thanks for reading and see you in September! – BB

The Atlantic writes a story about the rosery being an extremist weapon of violence. I was trying to remember that time an extremist Catholic tried to kill the artist that depicted the Crucifix dipped in piss or any journalist that produced a story about sexual abuse by priests. I bet Salman Rushdie would have something to say about all that.

I just wish those people would leave here and find a country they liked.

The Atlantic like Newsweek and Time as well as Rolling Stone nothing but the usial fake news we get from the talking heads on TV and the birdcage liners like the NYT’s and W.P.