Where we are now- a banana republic 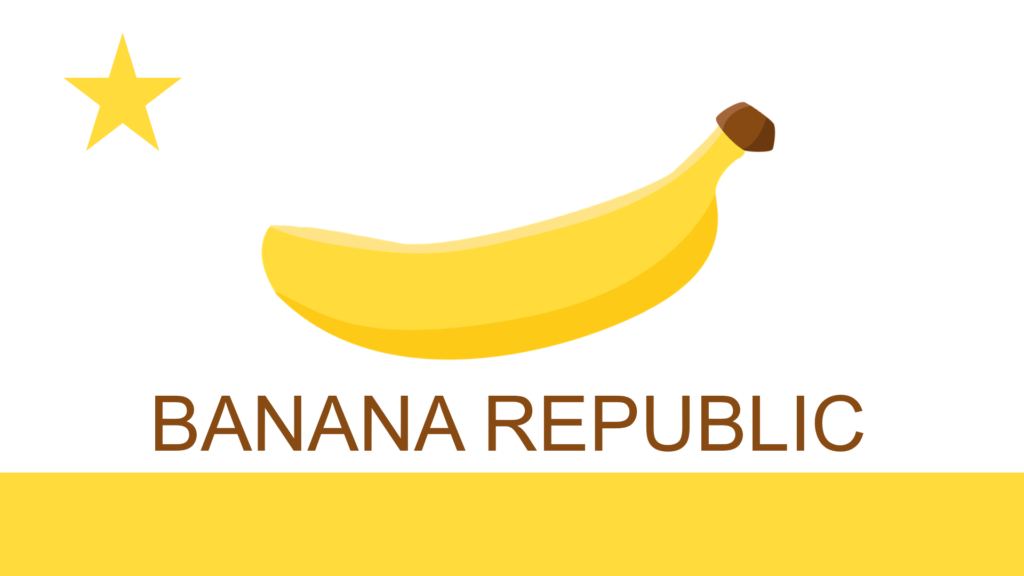 Boy it is open season for drama queens on Twitter. There is no end to condemnation and smearing of Donald Trump. He’s being called a traitor, a thief and more. Michael Hayden and Michael Beschloss have called for Trump’s execution. Scott Adams notes that the media is out in full “propaganda mode.”

Propaganda mode: “could have included” https://t.co/3yXoC6Nddy

A little taste of the left

FACTS: Donald Trump is a treasonous dickhead that has turned his cult followers into domestic terrorists that are willing to kill other Americans so he can keep his power.

Figures who pushed the debunked Russian collusion, incitement, or bizarre attempted murder claims are now claiming with the same certainty that conviction is finally at hand. Once again, before the eggs fly, the release of actual evidence would be useful.

Brian Auten was named in a letter Monday by Sen. Charles Grassley, R-Iowa, to Attorney General Merrick Garland and FBI Director Christopher Wray, informing them that bureau whistleblowers charge the analyst was part of a “scheme” to “undermine derogatory information connected to Hunter Biden by falsely suggesting it was disinformation.”

Based on findings by the Justice Department inspector general,  Auten “failed to advise” his colleagues of the unreliability of the Steele dossier, the compilation of salacious claims against Trump later debunked by special counsel Robert Mueller’s probe, which could not find evidence of Trump-Russia collusion.

Paul Sperry said of Auten: This Russiagate FBI Analyst Couldn’t Verify Anything In The Steele Dossier Yet Said Nothing For Years

One of the whistleblowers claimed the FBI assistant special agent in charge of the Washington field office, Timothy Thibault, shut down a line of inquiry into Hunter Biden in October 2020 despite some of the details being known to be true at the time.

A whistleblower also said Thibault “ordered closed” an “avenue of additional derogatory Hunter Biden reporting,” according to Grassley, even though “all of the reporting was either verified or verifiable via criminal search warrants.” The senator said Thibault “ordered the matter closed without providing a valid reason as required” and that FBI officials “subsequently attempted to improperly mark the matter in FBI systems so that it could not be opened in the future,” according to the disclosures.

According to Jim Jordan, at least 14 FBI whistleblowers have come forward. 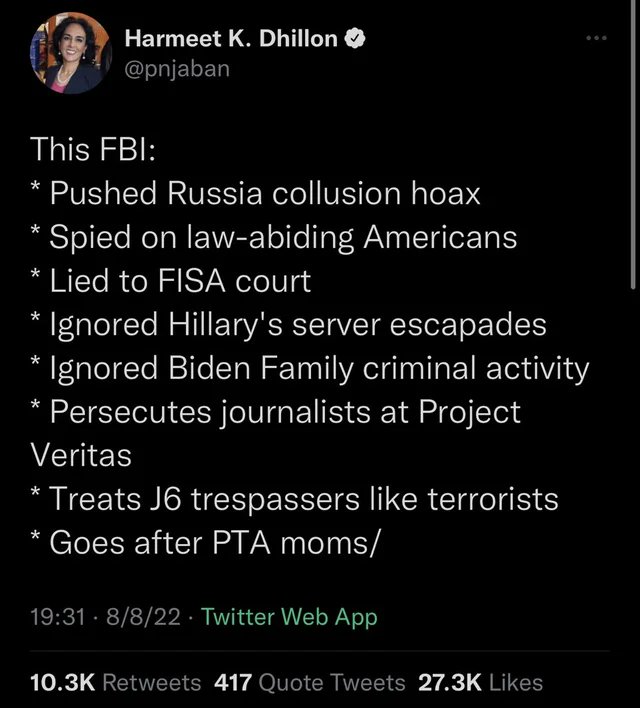 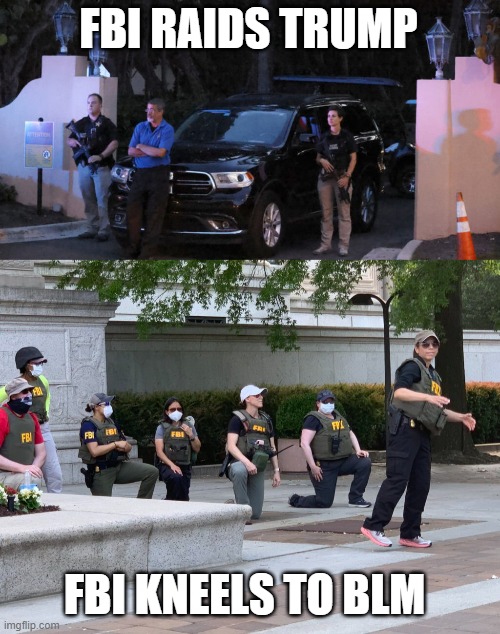 When is the last time the FBI executed a humiliating raid on a democrat- or on Hunter Biden?

The FBI seized boxes containing records covered by attorney-client privilege and potentially executive privilege during its raid of former President Trump’s Mar-a-Lago home, sources familiar with the investigation told Fox News, adding that the Justice Department opposed Trump lawyers’ request for the appointment of an independent, special master to review the records.

Trump asked for his lawyer to be present while the FBI ransacked his residence. Request denied.

They took his passports

The FBI searched and removed what some claimed to be “top secret.” Who gave the FBI clearance to view top secret documents? Why did the DOJ wait 18 months if they were so concerned about Trump holding the materials? When granted the warrant the FBI waited three days to conduct the raid. Why? Because they waited to give Biden just enough time to blow town without having to answer any questions.

Trump claims that he had declassified all of the documents with which Kash Patel agrees. More about that

Why is this happening? 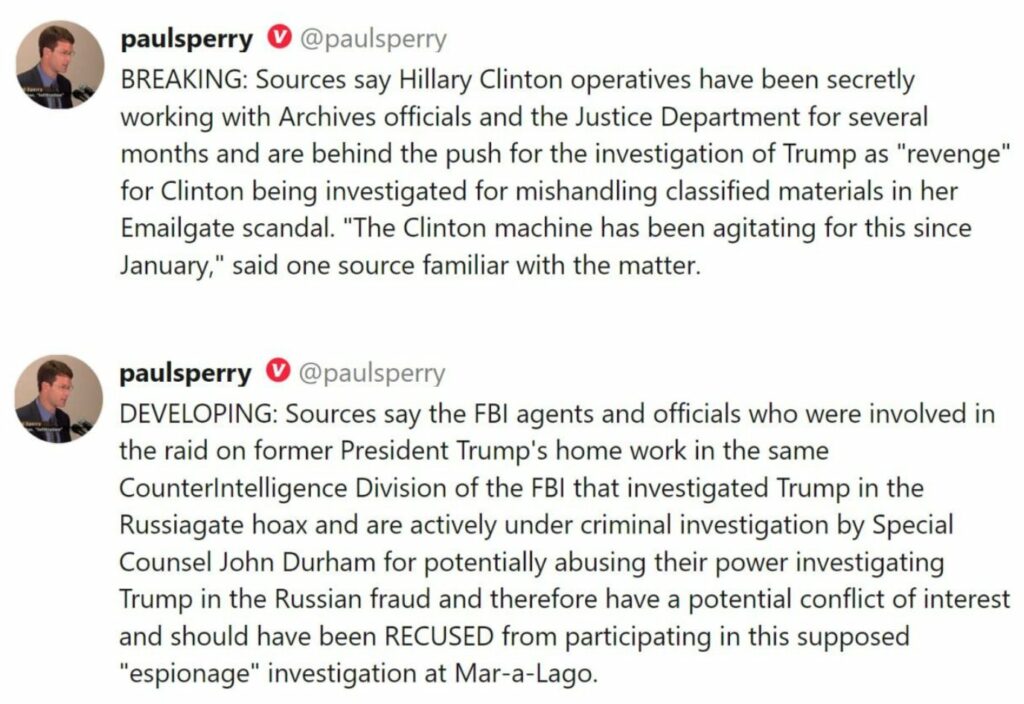 Sperry was immediately banned permanently from Twitter for exposing the truth.

The midterms are coming in about 75 days. That’s another

The clear purpose of the raid is four-fold.

What we really need to see is the affidavit for the warrant, but I doubt we’ll ever see it. John Carlin, Susan Rice and Lisa Monaco are in charge here and you can expect that affidavit will be buried deep in the NSD, the only government agency beyond any oversight. This is a dark time in America. We officially have a banana republic now, but Joe Biden is going to absolutely hate 2025.

Don scares the shit out of the UNIPARTY. If you think Mitch did not have this in mind when he “moved heaven and earth” to confirm Garland one of 2 things:
1. You have not been paying attention the last 22 years.
or
2. You are exceptionally naive.

They accepted a lawyer’s assertion that no classified material remained until a Trump insider informed them otherwise. At that point they got a warrant, raided the residence, and found what they’d been told was there.

If this was so sensitive, why did the Feds wait 18 months to act?

There are no classified documents of interest. No crime committed.

They accepted a lawyer’s assertion that no classified material remained until a Trump insider informed them otherwise. At that point they got a warrant, raided the residence, and found what they’d been told was there.

To see anyone on the left, that gave Hillary a 100% complete and total pass for having classified documents on her secret, unsecured, illegal home server, which was hacked by everyone and then the total destruction of 33,000 State Department documents, pretend to be concerned about someone having classified documents is hilarious. The only thing the left wants classified and hidden from the public is all the mountains of evidence of their own corruption.

The feds were there months ago, saw the documents and responded with a thank you to Trump for all his cooperation. So, again, why did they wait till now to react to such a dire national security threat?

There’s no more evidence that the Top Secret documents stashed in Trump’s basement were ever declassified than there is that the election was rigged.

The sad fact is that Trump’s followers believe whatever he says, despite the established fact that he lies constantly and is completely devoid of scruples.

There’s no more evidence that the Top Secret documents stashed in Trump’s basement were ever declassified than there is that the election was rigged.

So, what you are saying is that the documents are all declassified.

The sad fact is that Trump’s followers believe whatever he says, despite the established fact that he lies constantly and is completely devoid of scruples.

Do you believe we had zero inflation in July?

Joke of the Day: “The Republican Party is the party of law and order.”

Democrats are the party of fascism, political violence, anti-American, anti-Constitutional corruption and crime.

That is no joke.

@greg.
Joke of the day, you.
https://www.dailymail.co.uk/news/article-11126101/Portland-San-Francisco-Cleveland-Americas-deserted-downtown-areas.html

Soon they will be begging for federal aid, like NYC and DC when they get a tiny dose of what Texas, Arizona and New Mexico endure on a regular basis. We’ve speculated what applying the ruinous Democrat polices of San Francisco, Chicago, NYC, etc would be like if applied nation wide. Now we know.

Don’t Feel Sorry for Liz Cheney – She Increased Her Wealth by $36 Million After Serving Just 6.5 Years in Congress