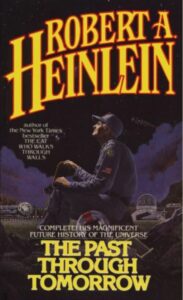 Welcome back friends and neighbors! As part of my month off from the news and with it my weekly “The Week in Radical Leftism” series I’m still leaving a few non-topical posts each week for the folks who are good enough to follow me each week. This week’s serving as a continuation of my informal series of “What We’ve Lost as Americans”. There’s no schedule to this series, nor any set topics I have planned to write about. I’ve previously written about how we’ve lost The Olympics as a shared American experince, amusement parks like Action Park, and movies like The Cannonball Run, a film set in an America that sadly no longer exists. Today we’ll look at Robert A. Heinlein’s “The Past Through Tomorrow” (TPTT) anthology.

I came to love short story collections as my vacation reading when me & my folks did the “summer before senior year of high school college visitation tour” trip. I had picked up Steven King’s “Skeleton Crew” and it was on. Last summer, on recommendations from a generally political forum, I took TPTT with me on the road and was amazed. I was also became angry at myself for not having discovered Heinlein sooner, despite the Brothers Bob having nearly all of his works in paperback when I was growing up. The collection of stories were well laid out and while not directly tied, the book includes a timeline showing when each story takes place in the future. And it was an impressive future.

The third story introduces us to D.D. Harriman, a man who comes off like an Elon Musk figure. He wants to go to the moon, and proposes the business deals needed to get the corporate backing to do so. I won’t go into too much detail, but Harriman ends up becoming a victim of his own success and has to fight to achieve his dream of going to the Moon. Throughout the book we see real human progress, gradual colonization, the early awkward and difficult steps of civilizing a new frontier, and eventually humanity travelling beyond our solar system. What impressed me is how real all of the characters are. The charcters that Heinlein creates aren’t lazy charicatures that Hollywood likes to inflict on us today, but rather real, flawed but mostly good people. Yes, some parts don’t age well, like the shock of seeing an astronaut removing the uniform’s helmet to reveal a woman in the suit, or mentioning buying a mink coat for one’s wife as a sign of success. but for a book whose stories were written (I think, while my dates may not be precise the range should be close) between 1938 and 1958! The stories have good and bad people, the occasional need for violence, but unlike too many future looking stories humanity has not become some mindless automotons, crazy and violent, or perfect enlightened beings. Just plain ol’ humans like any of us today, just years into the future. But what is it in these stories that we’ve lost?

In a word, optimism. While humanity is not perfectable, its achievemnts in TPTT are amazing. Science is used as a tool for improvement and exploration, unlike current times where “science” has been perverted into living in fear of the weather, locking down humanity in the name of “public health” and mutilating children. We even see the general stupidity of our culture where The New Yorker is scolding Musk and like minded entrepreneurs for daring to use their own money to open up space. Or there’s Vanity Fair whining that Musk is spending his own money in space instead fo helping people on Earth. Of course, never among these geniuses is how much of our money our various levels of governement waste an various garbage. No, it’s the private citizen’s fault for daring to dream.

TPTT is an unabashedly optimistic well written collection of works. If you’re looking for some late summer reading to wrap up teh season, I highly recommend it. And who knows, if enough of us dare to dream maybe we can rebuild the culture that can make this future possible.

Admin Note I: I’m actually using August for a month long “news cleanse”, and I won’t be joining the conversation in the comments nor in the feeds as I always do. Thanks for reading and see you in September! – BB

Bob, great article. Heinlein is a true master, and there’s SO many things he and other writers like him (PKD, Bradbury, Asimov) pondered about the kind of heart needed to engage the coming future they faced.

Now we’re here, with very few people who have that heart.

Been a Heinlein fan since a friend told me about the greatest work on moral philosophy written; which I read my soph year. Prior to. reading “STARSHIP TROOPERS” my plan was follow kid from Hoover High; Pensacola Naval Aviator. After reading TROOPERS i said to myself “If you can not look a man in the eye while gutting him; maybe you should not be killing him!” I did not want to be responsible for “collateral damage”. That book BTW was much like Clancy’s 1st “HUNT” The paperback outsold the hard copy by over 500% because readers like I (in both cases) got the book after hardcopy was not printing.

Superficial readers (like the folk making the bad movie!) saw it a a war novel. As an undergrad i knew it was about good government and men! To this day (60 years later) I firmly believe if you are not willing to shed blood for your country (I’ve shed a lot) you should not have the privilege of the vote! I well understand that many blood shedders are traitors; but those unwilling should not run the country!

Reading Bob’s book made a grunt out of me!

My son was such a fan of Bob he had read all his books by '99; owns most of them. We saw the movie that totally did not understand the book together decades ago. I was both sad ;and mad!

Have a good rest!