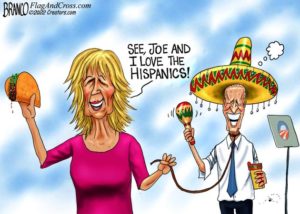 Welcome back to Day 549 of the Let’s Go Brandon* occupation! Straight to the insanity…

In other words, another day ending in a “Y”

7/14 – TikToker Wants To Get Sterilized Because Of Roe v. Wade Ruling, And I Think Her Terms Are Acceptable

This is one of the rare stances that ejoys biartisan support, as there are very few Normals who will object to the clinically insane not reproducing

This week’s edition of Brother Bob’s Razor – “Never attribute to political incompetence or stupidity that which can be explained by pure malevolence.”

7/16 – Sweden: Vaccinations Increase Risk of Hospitalization While Having Almost No Effect on Covid

That should help with the recruiting shorfall!

This week’s edition of “Where the Hell are all of the so-called feminist groups right now?”

7/18 – The Democrat Plan to Steal the Midterms

As tinfoil hatty as the headline sounds, over the last few years I’ve seen too many conspiracy theories turn out to be prophecies.

How about a happy story?

Penn nominated transgender swimmer Lia Thomas as their NCAA woman of the year. Hell of an accomplishment to be woman of the year after only being a woman for a couple of years. https://t.co/gW3acTQ1Jl

Let’s face it. Biden was dumb in his prime.

7/13 –
The left sees the Constitution as an impediment to them
implementing a single party totalitarian police state. Sometimes they can use
the Constitution to suppress other opposition, but for the most part, they hate
it.

7/14 –
Wholeheartedly agree that there are those who should not
reproduce. Kudos to them being proactive instead of waiting until murder is
required.

7/15 –
The only thing idiot Biden does consistently is lie. Subsidizing
the millions and millions of new illegal immigrants alone will require billions
and billions of dollars. Democrats don’t care about the American people.

7/16 –
I miss the days when vaccines vaccinated.

7/17 –
Why don’t they just serve watery soup that
identifies as steak? Then sailors can be disciplined for bullying the
“steak” if they aren’t convinced.

7/17 –
I guess while he “identifies” as female, he forgot to
tell his dingus.

7/18 –
Doesn’t sound tinfoil hatty at all. I have no doubts they will
cheat and cheat big; their survival depends on it. That article does get out
there a little, but then again, desperate, vindictive, power mad Democrats are
capable of anything. The January 6th theater will go on right up to the
elections, providing a steady stream of invented accusations, hearsay, opinion
and innuendo.

7/19 –
Liberal comedians must be salivating at all the opportunities for
comedy they have to pass on due to their ideology.

7/20 –
Well, it’s not like the left can campaign on their overwhelming
successes, is it?

7/21 –
People with cash on hand during economic downturns always exploit
the opportunities. It’s only OK when a leftist ally does it.

7/22 –
My brother gave me some magazines he had read and one was a gun
magazine. NO WHERE were there any ads showing how great a gun is for killing
people. The fact is, a gun is made to emit a bullet; what the bearer does with
the bullet is their choice. It is the fault of Democrats that the AR is
“scary” and “a killing machine” because they have promoted
it as such.

I gotta tell you, this “email address invalid” message
is driving me nuts

The left sees the Constitution as an impediment to them

implementing a single party totalitarian police state. Sometimes they can use

the Constitution to suppress other opposition, but for the most part, they hate

I still remember that disgusting day when Obama publicly cried about how much the Constitution protected us from him.

I gotta tell you, this “email address invalid” message
is driving me nuts
Let Curt know what your seeing. His gmail handle is simply “floppingaces”

Let Curt know what your seeing. His gmail handle is simply “floppingaces”

The makers of the plug in say its a browser cache problem. User needs to delete cache and restart browser.

1
Reply
Deplorable Me
Reply to  Curt

OK, for an ignorant person, explain what the “browser cache” is. Is that search history?

Best thing to do is do a web search of how to delete browser cache and include the browser your using.

1. On your computer, open Chrome.
2. At the top right, click More.
3. Click More tools and then Clear browsing data.
4. At the top, choose a time range. To delete everything, select All time.
5. Next to “Cookies and other site data” and “Cached images and files,” check the boxes.
6.Click Clear data.

Each browser has different methods. Cache is usually the computer storing images and web pages on your computer to help it browse faster.

I find cursing the little toe of the software coder to a crushing blow in the dark of night on the way to the bathroom helps too.

1
Reply
Deplorable Me
Reply to  Curt

I was just having the problem. I was posting a link on the “Good Samaritan” article. It gave me the “invalid email address” message. I tried the “test” trick (“test” went through, but I could not edit it with the link). I tried clearing the browser history. I tried different browsers. Nothing worked. Then, I tried posting a comment and adding the link using the “link” feature and it worked.

Does that add anything to the mystery?

Hmmmm… does it usually only happen to folks when they put a link into the text of a comment?

I think I’m going to start looking for a new commenting platform. This is getting old.