And I thought it was just him

So demands the First Birthing Person. Jill Biden has not a Ph.D, but a Ed.D., a much lesser degree. Joe Biden explained it this way

“She said, ‘I was so sick of the mail coming to Sen. and Mrs. Biden. I wanted to get mail addressed to Dr. and Sen. Biden.’ That’s the real reason she got her doctorate,”

So Joe Biden basically told the U of Delaware to give Jill a “doctorate” and of course they obliged.

Mrs. Biden wanted the credential for its own sake. As for its quality, well. She got it from the University of Delaware, whose ties to her husband, its most illustrious alumnus if you don’t count Joe Flacco, run so deep that it has a school of public policy named after him. That the University of Delaware would have rejected her 2006 dissertation as sloppy, poorly written, non-academic, and barely fit for a middle-school Social Studies classroom (all of which it is) when her husband had been representing its state in the U.S. Senate for more than three decades was about as likely as Tom Hagen telling Vito Corleone that his wife is a fat sow on payday. The only risk to the University of Delaware was that it might strain its collective wrist in its rush to rubber-stamp her doctoral paper. Mrs. Biden could have turned in a quarter-a**ed excuse for a magazine article written at the level of Simple English Wikipedia and been heartily congratulated by the university for her towering mastery. Which is exactly what happened.

This explains Dr. Jill’s inability to properly pronounce simple Spanish words and liken Hispanics to Mexican food. In April of 2021 she mangled this simple phrase

Si say pwodway?  Pathetic effort, DR. Jill. It should have been “Si, say PWAYday” It’s not difficult, especially for a DOCTOR.

She put her matchbook degree on display once again with a clumsy, obsequious effort at a compliment.

U.S. first lady Jill Biden’s attempt to compliment Latinos flopped on Monday when she said they were as unique as ‘breakfast tacos,’ prompting criticism from across the political spectrum.

Did you catch the other mispronunciation?  Bodegas. A small grocery store. It’s bo-DAY-gahs, not BO-guh-das.

The National Association of Hispanic Journalists (NAHJ) responded: “We are not tacos”

She insists on using the term LatinX, which many Hispanics find offensive.

A recent Politico poll of Hispanic voters found that only 2 percent of those polled refer to themselves as ‘Latinx,’ 68 percent prefer ‘Hispanic,’ and 21 percent favored ‘Latino’ or ‘Latina.’ At the same time 40 percent said Latinx bothers or offends them while 30 percent said that use of the term would make them less likely to vote for a candidate.

DOCTOR Jill, like AOC and Elizabeth Warren, continue to use the term and promote its use no matter what Hispanics think. Being liberals, they know better than do Hispanics themselves. And here I thought it was just Joe.

The United States has had only one more disgusting wife of a president and that is the tranny big mike married to the fag obama.

jill has a past one would or could not be proud of. And her current elderly abuse is just another chapter in a sordid life.

She knowing put Joe out there for her own selfish ambitions. He has not the mental cognitively to hold the office given to him as a result of what we now know as a stolen election.

And jill knowingly pushed him into it without the compassion for his deteriorating health.

She fits in well with the dysfunctional biden crime family

Out of the abundance of the heart, the mouth speaks, says the Bible.
Obviously Jill Biden doesn’t give a tinker’s damn about Hispanics.
She doesn’t even try to learn anything about them.
All my adult life I’ve been aware of “Breakfast Burritos,” that turned out to be so good that now I make them myself, wrapping eggs, cheese and bacon in a soft flour tortilla instead of serving a plate with pancakes or hashbrowns.
I rarely have seen anyone eating tacos for breakfast.
Maybe that’s an “East Coast” thing.

What a pendejo. These elitists have no idea what people are or what they do.

"We celebrate our Asian brothers and sisters, who are as bold and vibrant as General Tso's chicken and as dependable as pork fried rice" — Dr. Jill Biden, speaking to the Asian American Federation of New York

This is a bad remake of all in the family…..Racist Pedo Pete Brandon, and his wife dingbat.
We know poor kids are just as smart as breakfast tacos.

The American people did not choose biden. He has been forced upon us to do harm to our country.
It is time to terminate this charade

Despite what has been proven the election is not going to be corrected, the SCOTUS failed to take up the case, cowardly. the best we can do is find the humor in our destruction and resist as best we can.
We know what would have happened with the laptop from hell if it was Don Jr., Trump would have been ridden out of DC on a rail tarred and feathered.
We see the 2 tiered “justice system”.
Sri Lanka now thats a coup! All for green farming, top down decisions not made by farmers.
phuck their pheelings laugh and point.
He called his step mom What?!! bwahahahaha
His speed dial to daddy is what? oh stop I am gonna pee!
Bring back decency to the White House was the campaign, the biggest load of malarky ever. 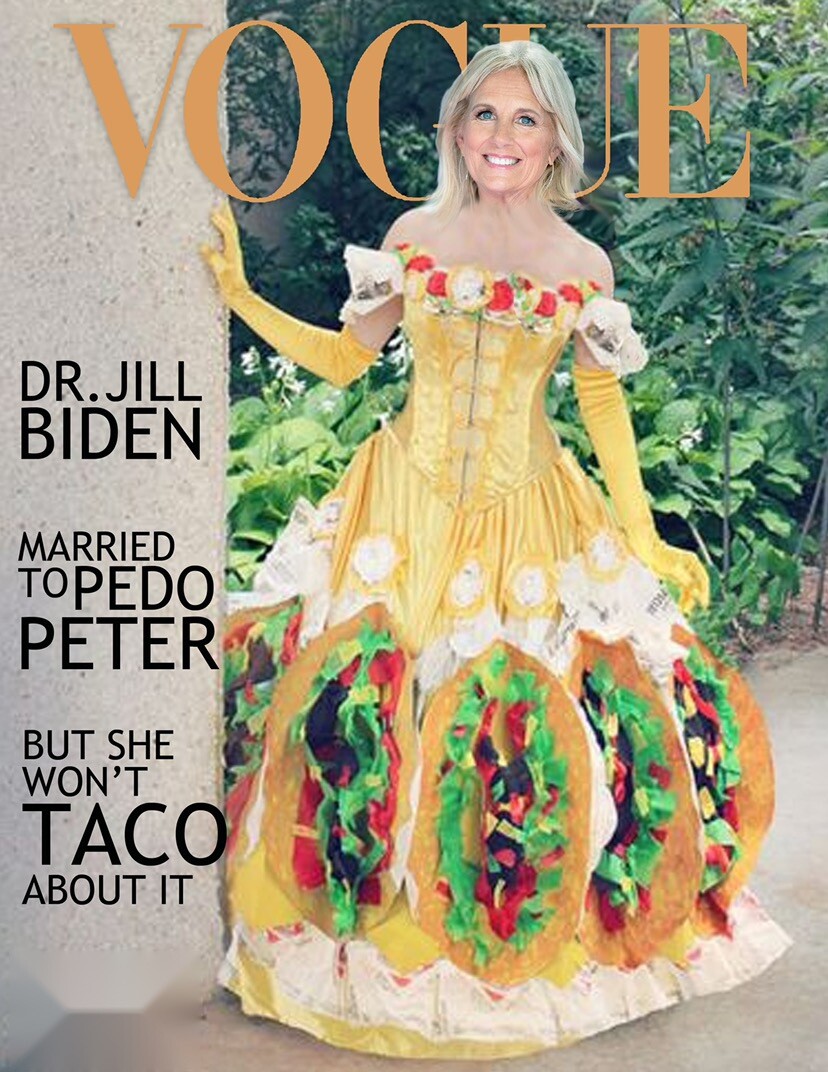 And I thought it was just him

Jill’s pronunciation of bodega as “bogeda” is awfully close to the term “borgata”, which is what organized crime calls their local criminal gangs. Just saying.