Does Kavanaugh have to die to get Garland to act- or is that the Biden plan?

Following the leak of the opinions from SCOTUS, protests mounted in front of the homes of conservative Justices of the Supreme Court. Brett Kavanaugh’s home was among them. The protests were an effort to intimidate Kavanaugh into backing away from the potential reversal of Roe vs Wade.

Once the decision to overturn Roe, Kavanaugh’s home was again the target of protest.

The other night Kavanaugh was harassed while eating dinner at Morton’s Steak House and forced to flee out the back door.

All are illegal under Federal Law.

Whoever, with the intent of interfering with, obstructing, or impeding the administration of justice, or with the intent of influencing any judge, juror, witness, or court officer, in the discharge of his duty, pickets or parades in or near a building housing a court of the United States, or in or near a building or residence occupied or used by such judge, juror, witness, or court officer, or with such intent uses any sound-truck or similar device or resorts to any other demonstration in or near any such building or residence, shall be fined under this title or imprisoned not more than one year, or both.

Nothing in this section shall interfere with or prevent the exercise by any court of the United States of its power to punish for contempt.

What have they acted upon?

The DOJ has become Biden’s KGB. Now we learn that the group ShutDownDC  is issuing bounties on conservative Justices of the Supreme Court. These are real threats. One wonders if ShutDownDC is also hiring snipers. These overt threats might even be enough to stir a mentally ill individual to take up a weapon, as has already happened. The next time might not end up as favorably. Garland still has his thumb up his ass.

“Poor guy. He left before his soufflé because he decided half the country should risk death if they have an ectopic pregnancy within the wrong state lines. It’s all very unfair to him. The least they could do is let him eat cake.”

She had her head handed to her, not the least for whining about her spending weeks in an armed limo (despite calling for defunding police)

Many of us have spent weeks in armored vehicles & traveling through backs of buildings bc of right-wing threats. You don’t hear much about it.@GOPLeader McCarthy said he wants to promote House members who incited violence.

Their feigned horror at protest is a silencing tactic.

And let’s not forget this 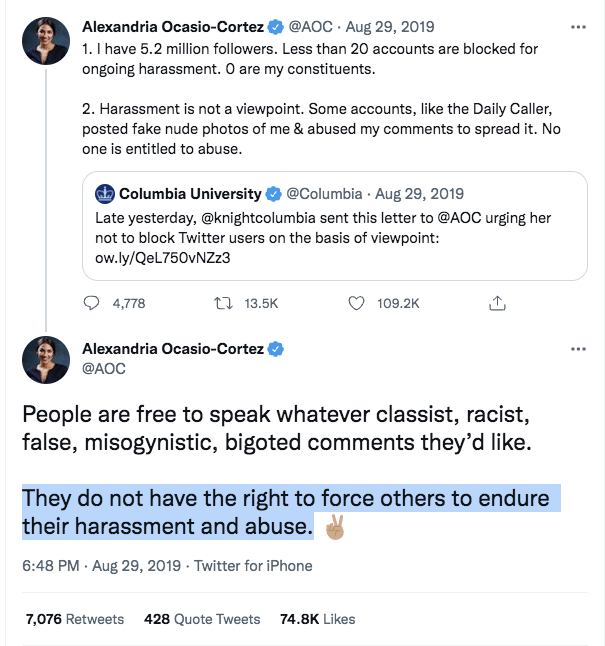 “When public officials go into public life, we should expect two things. One, you should always be free from violence, harassment, and intimidation. And two, you’re never going to be free from criticism or peaceful protests, people exercising their rights,”

So that makes it all OK?  Conservatives are pretty damned upset at Biden and democrats for encouraging the illegal alien invasion and flooding the country with fentanyl but to my knowledge no conservative is issuing bounties on them.

Merrick Garland’s DOJ is doing absolutely nothing in reaction to the overt threats against the conservative members of the Supreme Court, which begs the question- is getting them killed part of his plan? Knock off a couple of Justices, replace them with activists and bring back Roe.

Cynical? Biden is actively working to destroy this country- illegal invasion, fentanyl pouring into the US from Mexico killing 100,000 per year while Biden does his best to cripple border security, demolishing our energy independence in favor of embracing China for everything the green economy demands. You bet I’m cynical.

Yeah, that would be a win-win. Get rid of Kavanaugh (or Gorsuch or Thomas) and replace them with another pedophile-friendly shyster. The real tough part is, what boxes are left to check? A white transgender Siamese twin that identifies as black?

Garland doesn’t care about protecting the SCOTUS; he wasn’t allowed into the club.

If Kavanaugh is assassinated Garland will have signed his own death warrant. It will be the first act in a hot civil war.

Bluster is not reality, Loren.

democrats are the political assassins. I would not put it past them to get another lunatic leftist on the bench

Wheres the leaker? We know, they know who leaked the brief. I think it was a liberal Justice not an aide.

0
Reply
Deplorable Me
Reply to  SkippingDog

But it doesn’t apply to people harassing federal judges. Code 18, 503. It’s against federal law. Just because the fascists in the DOJ don’t enforce the law doesn’t mean it doesn’t exist.

Free speech, apparently, doesn’t apply to US Army generals who tweet a comment about the demonstrated stupidity of the First C*nt.