AGAIN- the signs were all there 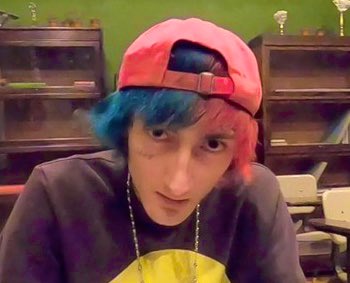 I feel a sense of deja vu. A little more than a month ago I wrote The signs were there. They’re almost always there. No one was paying attention.

Now it happens again. The Highland Park shooting suspect has been apprehended. Once again, there is a mass shooting by a young male who checked ALL of the boxes.

And of course, “Uncle of Bobby Crimo said nephew showed no signs of violence”, other than the videos glorifying school shootings.

The Daily Mail calls him a Trump supporter, which is laughable. He has a pinned tweet which says “stay woke.”

No Trump supporter ever says “stay woke.” But it might be a good time to heed another self-described friend who said this of him 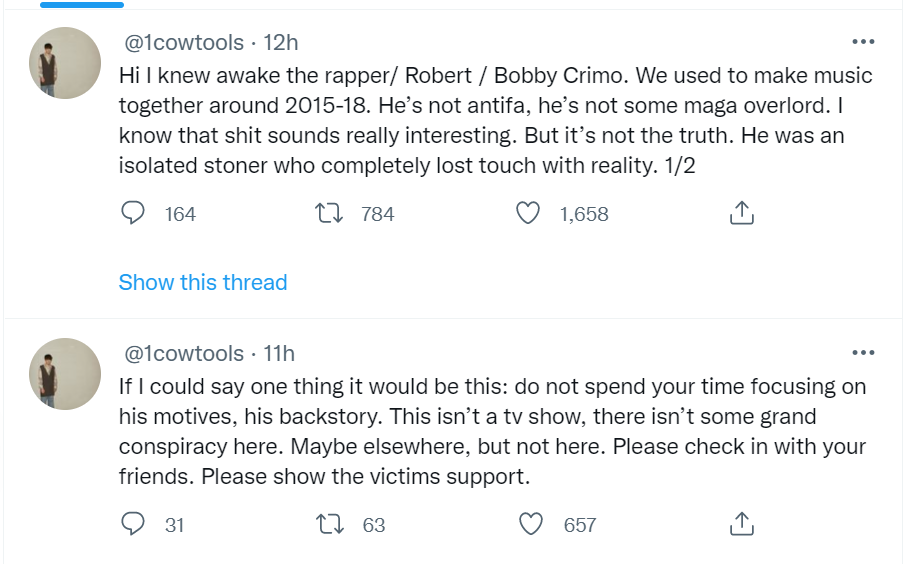 As with so many others, this shooting was preventable.

It’s not as if he was on some obscure social media. He has an IMDB page, a Spotify account and a Youtube channel and had thousands of followers. It’s claimed that someone reported Crimo to Spotify to no avail. This video was screaming for attention:

What is The Firearms Restraining Order Act?

In Illinois, under The Firearms Restraining Order Act, guns may be removed temporarily from those who are deemed dangerous. Effective January 1st, 2019, Illinois joins over a dozen states in passing “red flag” laws regarding firearms.  This involves a suspension of a person’s right to buy or own firearms as well as having all of the individual’s guns temporary removed from their possession.

If a person is declared to be a danger, police can temporarily remove all firearms from the possession of the individual in the interest of protecting themselves or others.  The person whose rights are suspended will then have to wait at least two weeks to petition to have their license to own firearms restored.

Naturally, the knee jerking took off faster than a Chinese hypersonic missile. Biden, Pritzker and the usual lunkheads all were calling for new gun laws. Why bother? The one on the books could and would have stopped this from happening had anyone been paying attention. He was reportedly “known to law enforcement.”

No amount of gun laws will be effective if the laws are not enforced. Yet gins are not the problem. Guns are ubiquitous in Maine and Nebraska- mass shootings are not. This is mental illness visiting death and destruction. That’s where the efforts at prevention need to be directed.

If the present laws are not enforced and mental status is not considered when permits are issued, history will be repeated again. Also, people need to report these behaviors to aid law enforcement.

It’s become laughable. Law enforcement can’t protect themselves, let alone you! Red flag laws: anyone who has ever had government at any level confiscated a car or any other property knows how next to impossible it is to get your property back and guns will have mega-levels of hoop jumping added. Enough so that most people will just write it off. The end point will be accomplished which is taking guns away. I’ve got an idea! Identify people whose odd behavior indicates mental illness and protect society from them.

0
Reply
Deplorable Me
Reply to  71Grad

Anything so easily abused should not be law, and we have seen how the left LOVES to abuse laws.

My professor told me gun violence is killing people. I told him my pencil failed his physics test.

and (he’s not white)

Why the fake, Nathan?

That’s Darrell Brooks, Jr., 39. He’s facing 77 charges for the vehicular rampage that left six people dead and dozens more injured after he ran over a bunch of white people at a Waukesha parade.

Here’s another picture of him, from CNN. Are you saying CNN is fake news?

Perhaps it’s time to get up from the cubicle, go say hi to some of your other friends at the Bureau, and go get a snickers?

No Fcowtools twiiter boi, we need to study the background, was he raised on pharma adhd drugs? Wheres Daddy? This skinny, homely, twirp thinking school shootings are material for entertainment.
The mental health these kids require is zero electronics a healthy diet and a job or trades training.
Known to the police, AGAIN.

It is the left. It is ALWAYS the left. Address the problem.

He was arrested wearing women’s clothing.
Perhaps just as a way to hide as they were looking for a male.
Perhaps to hide his many tattoos, one on his neck an Antifa image…..

Antifa has ZERO members in the MAGA army of Trump supporters…..unless you count the spies.

Just another Patriot celebrating Independence Day by joyfully emptying his legally purchased assault weapon at old and young people watching a parade. Where were the “good guys with guns’ to stop him? Oh yeah, gun nutters think the shooter was the good guy. Despicable.

Antifa on the loose again?

Nah. He’s a Leftwing nut who, as usual, realized his ideology is untenable so he went on a killing spree.

The anti-2A nutters need to ignore, or just plain lie about, all the cases that a “good guy with a gun” DID save lives.

You’ll NEVER do it.

And remember, guns are not the problem. That’s not even open for debate, so those promoting “gun control” are dismissed as morons.

Same body count, at a parade, with a truck instead of gun:

0
Reply
Deplorable Me
Reply to  SkippingDog

What “assault weapon”? A gun? A knife? A baseball bat? A hammer? A crowbar? A jack handle?

Every liberal should be disarmed. They are a danger to society. This guy was a NUT that idolized leftist violence. The LEFT is despicable.