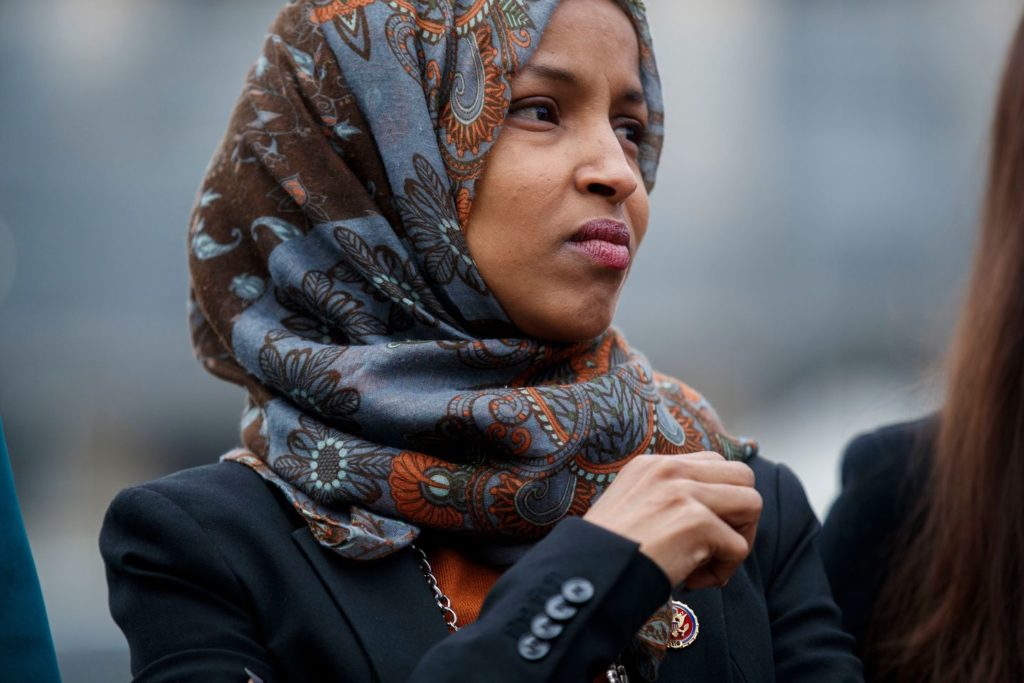 Ilhan Omar is a cancer in the House of Representatives. Of that there is no doubt. She is an anti-Semitic hypocrite and a liar. She came to this country courtesy of a questionable relationship with her brother and has not stopped b*tching about her new home since then, despite making herself a millionaire via paying campaign funds to her current husband.

Omar has quite a dubious history with men:

Rep. Ilhan Omar’s ex-husband learned of her alleged affair with her chief fundraiser when he walked in on the two lounging around her apartment in pajamas  — and the jilted hubby will be paid tens of thousands of dollars to stay silent, according to a report. Ahmed Hirsi made the shocking discovery last spring, during a surprise visit to his then-wife’s Washington, DC apartment from Minnesota, where he was living with their three children, the Daily Mail reported. “It’s wasn’t that he actually caught them in bed,” a source told the Mail of Hirsi walking in on Omar and her chief fundraiser Tim Mynett, who was also married at the time.

“But they were clearly in a romantic situation,” the source said of the pajama-clad lovers.

She is paying off her ex to remain quiet.

Hirsi had suspected Omar was cheating, “but she kept telling him he was paranoid,” and insisted he stay in Minnesota with the children, the source told the Mail. He was left “angry and humiliated” by the discovery, the source said.

He will now collect as much as $250,000 over six years if he keeps his mouth shut, the source told the Mail.

Records show that the 37-year-old Somali refugee applied for a marriage license to a man named Ahmed Abdisalan Hirsi in 2002. She was 19, having immigrated to the States five years earlier.

The duo was never officially married, at least at the time.

Instead, they wed in a traditional Muslim ceremony and had two children before splitting up in 2008, Omar has said. The next year, she married Ahmed Nur Said Elmi, whom she described as a “British citizen,” records show.

She has said the pair split in 2011 but never officially ended their marriage, although they dissolved it according to Muslim tradition.

Omar then took up again with Hirsi the next year, and the couple had a third child in 2012, records show.

Her latest hate-the-US diatribe came in a town hall about gun violence.

Democratic Rep. Ilhan Omar said that her arrival in Minnesota exposed her to more gun violence than living in an east African refugee camp did. Speaking at the Gun Violence Community Conversation at North High in Minneapolis on Thursday, Omar said: ‘For six years, I had the privilege of not seeing any violence, until I moved to Minnesota.’

Not seeing any violence? You might be tempted to think that the camp she lived in prior to her arrival here was delightful but you would be wrong.

According to a 2021 feature on Dadaab by the International Policy Digest, the Kenyan government has been exploring the idea of shutting down the camp since 2019 due widespread crime including rape, illegal firearms trading and violent crime.

But somehow, Minnesota is worse? But if so, why is it worse? It might have a lot to do with the Islamic firebrand herself.

Rep. Ilhan Omar (D-MN) called for defunding the Minneapolis Police Department on Sunday, saying that they were a “cancer” and that the department was “rotten to the root.”

The Minneapolis police budget was slashed by $8 million in the middle of a crime surge. Naturally, she blames the police for the crime wave.

One, the police have chosen to not fulfill their oath of office and to provide the public safety they are owed to the citizens they serve, right? It’s documented,” she said. “But even before that, it was documented. The Minneapolis Police Department is the most dysfunctional police department, in our state and probably in the country.”

“The second part is that there has to be accountability,” Omar continued. “And someone that is actually taking responsibility for what the police does and doesn’t do. And that doesn’t exist in this moment.”

A good deal of the crime in Minneapolis has been imported in the form of Somali gangs.

Minneapolis: Somali Gangs Are Claiming Territory & Killing To Defend It

Ali was one of seven Minneapolis-area Somali men killed over a 10-month period, and authorities believe all were killed by fellow Somalis. Police say it’s too simple to tie all the killings to Somali gangs, which have lured hundreds of young community members to their ranks in recent years.

Those in the insular community willing to speak out, however, disagree.

“It was all gang activity, totally, 100 percent,” said Shukri Adan, a former Somali community organizer who estimated in a 2007 report for the city that between 400 and 500 young Somalis were active in gangs. “The police don’t want to say that but everybody else knows that.”

So when hundreds of Somalis began turning up in the town–many of them dressed in traditional Islamic garb–locals quickly took notice.

“They’ve had an impact here. Unfortunately, it’s not been a good impact,” said Brian Mosely, a reporter for the local Shelbyville Times-Gazette.

Mosely won an award from the Associated Press for a series of articles he wrote for the paper about Shelbyville’s Somalis.

“I found that there was just an enormous culture clash going on here,” he said. “The Somalis were–according to a lot of the people I talked to here–were being very, very rude, inconsiderate, very demanding. They would go into stores and haggle over prices. They would also demand to see a male salesperson, would not deal with women in stores”

“Their culture is totally alien to anything the residents are used to,” Mosely added.

The problems extend to local schools–where some Somali students won’t talk to female administrators. There have also been issues with local law enforcement.

“I’m not really sure whether that is because of experiences with the police in their country, or whether that’s just the way their culture is,” said Shelbyville’s Police Chief, Austin Swing.

As with Omar, there is a resistance to adapting to the new culture. I don’t see much good in the culture they’re bringing. Being LGBTQ is a crime in Somalia and may be punishable by death. For all of Omar’s complaining about the police, there is one incident she avoids entirely- the murder of a white woman– Justine Damond- by a Somali Muslim cop- Muhammed Noor.

Despite her highly questionable personal behavior, Ilhan Omar is quick to pontificate her pseudo-morality and stir anti-police, anti-government and anti-American resentment. I’d like to hear her square her Islamic beliefs with her support for LGBTQ groups. See here for more info.

Did I mention that she has spent $22,000 for her own security while seeking to eliminate the police in Minneapolis?

Omar did not come here to be part of the American life. She is here now to tear it all down.

“We can’t stop at criminal justice reform or policing reform,” she said during an outdoor press conference. “We are not merely fighting to tear down the systems of oppression in the criminal justice system. We are fighting to tear down systems of oppression that exist in housing, in education, in health care, in employment, [and] in the air we breathe.”

This country needs to rethink its vetting process for immigrants. Some cultures just don’t fit.

This sub human piece of trash should be deported for numerous immigration violations.
Aside from the fact that she is an anti-Semitic, she does not deserve to be in congress. She disgraces the office with her presence.

It is my hope that Royce White wins the Republican primary and then defeats her in the November mid terms If not, the new Congress in 2023 should expel her as a first order of business

America hating pieces of shit should not be representatives in Congress

2
Reply
Deplorable Me
Reply to  TrumpWon

America hating pieces of shit should not be representatives in Congress

She represents her constituency of America-hating pieces of shit.

Omar is one of those I will recommend to my representatives that needs to be censured and, if possible, removed, from the House if/when the Republicans get majorities.

Maybe if she grabbed a woman by the pussy would MMJ be happy!

If she did, the Taliban would send someone to take care of her. But it was OK that she married her own biological brother to lie her way into the U.S., right?

At least Trump liked America and demonstrably pursued policies that enriched the US, and her citizens.

Omar is a foreigner who was allowed into our government, with the expected results.

At least Trump liked America and demonstrably pursued policies that enriched the US, and her citizens.

0
Reply
Deplorable Me
Reply to  PhillipMarlowe

Maybe if she grabbed a woman by the pussy would MMJ be happy!

I’ll wager she has. After all, she IS a socialist slut.

Maybe there’s hope for that area after all.