The Great Replacement Theory is not a theory. It’s here. Now. 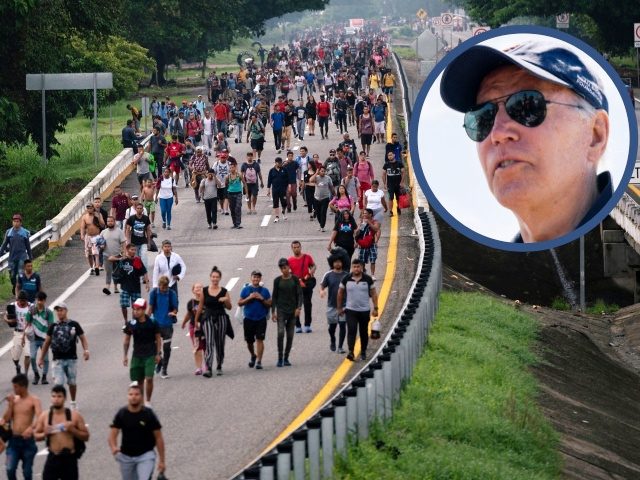 Oh, I know. There’s a lot of resistance to this from the left and it is the strenuousness and magnitude of that outrage which ought to be a clue to its true nature. Remember, these are the same people who promoted Russian collusion for four years and they employed the same shaming tactics when we argued against it. Let’s make the case.

“We are five days away from fundamentally transforming the United States of America.”.

Joe Biden is Obama III. Hillary Clinton would have been Obama III except for Donald Trump, who spiked the plan for four years. Fundamentally transforming a nation is a big thing and from a Bill Ayers/ Rashid Khalidi offspring it’s something to be taken seriously. Biden is the continuation of the transformation effort.

So, what’s going on?

The Southern border is wide open. Border agents are punished for doing their jobs and morale has not been lower. They’re directed pretty much to stop apprehending illegals. Biden has cut their ranks to the point where large sectors go unpatrolled. Huge groups of illegals are swarming in. Border agents feel like “uber drivers.”

Biden is allowing in Afghans who aided the Taliban. 50 persons on the terror watch list have been apprehended, but that’s probably a small number in contrast to those who escaped the CBP and are in the country.

Biden has released more than 1 million illegals into the country, ignoring the Supreme Court and the law. The actual number of invaders is likely much closer to 2 million when the getaways are included. The flood of illegals is accompanied by a flood of fentanyl and human trafficking. Over 100,000 Americans now die every year from drug overdose, mostly from fentanyl. One might expect a serious President to take note of this but it’s not happening.

It’s not happening because this is all part of Joe Biden’s plans- the Great Replacement.

Biden has taken on the role both the legislative and the judiciary. He is accelerating the rate of naturalization of legal immigrants and adding them to the voter rolls in time for the mid-term elections. The democrat plan is to add another 1 million immigrants to the voter rolls and democrats plainly admit the goal:

Such a goal would ensure that about a million foreign-born residents are likely added to U.S. voter rolls in key swing states, both Gutierrez and Durbin seemingly acknowledged. Gutierrez, specifically, called the plan “transformative” for upcoming elections.

This is replacement theory in motion. It’s quite real. democrats are replacing Americans with the foreign-born democrat voters with the intention to create a permanent one-party state. Then Keith Olbermann can realize his wet dream- dissolve the Supreme Court. democrats will be able to shred the Constitution, doing away with the First and Second Amendments. Nancy Pelosi and her drunkard husband will continue to make zillions form insider trading. AOC will be Speaker of the House. Ilhan Omar will be the Majority leader.

Demographics are a freight train carrying them into the future. The GOP’s actions will accelerate their collapse.

Then he says that talk about demographics replacing Republicans is not replacement theory. Biden and the DNC are that freight train, and it has left the station.

The thing is, the country is getting a snoot full of what the country would be like under a one-party rule- crime is destroying cities, murder is becoming an hourly event, inflation skyrocketing, gas and food prices are becoming unaffordable, baby formula shortages continue and more. It’s a nightmare scenario.

This is the promise of a one-party democrat-run nation. Vote accordingly.

You are really a lunatic.
medical Malpractice at its best!

0
Reply
Deplorable Me
Reply to  PhillipMarlowe

Why don’t you refute specific points? Just because it is something you don’t like clearly pointed out to you doesn’t make it lunacy. It is an irrefutable fact.

Refute specific points? Give me something intelligent and based in fact to refute. Words from another white man who doesn’t accept Jesus as his saviour.

The name of the game for Leftist trolls like “phil” is argue needlessly with those of use merely calling out what’s going on in front of our face.

They aren’t intelligent, and think healthy debate is ONLY about stats, facts, and links.
They want to take us back into the usual way you control a population: confusion.

Democrats are actively working on a one-party police state. They are opening supplanting democracy, and openly calling for violence. The will, of course, stage more false-flags to merely flip the script.

And by the way…”Phillip Marlowe” is one the usual trolls that post here, under a different name.

Sorry Nat baby.
I post only as the Marlboro Man. No need to use a sock puppet.

Refute specific points? Give me something intelligent and based in fact to refute. Words from another white man who doesn’t accept Jesus as his saviour.

So, you didn’t read the article, just felt the need to declare it “insane”. Nothing crazy about that.

By the way, “spell check” can be a real savior.

Check the Oxford English Dictionary.
You will find “saviour” there.
I heard the article.
as I wrote, Medical Mal John provides no evidence, just nonsense.

To be more precise, they want a one party totalitarian police state. They show what they intend with their repeated no-due-process kangaroo kourts and imprisoning political opponents (while not prosecuting true violent political terrorists). Fewer and fewer Americans will vote for this stupidity. They need fresh lemmings.

When you need ignorant voters, what better source than illiterate, poorly educated, dependent illegal immigrants that can’t even understand our language? Democrats certainly don’t let laws get in their way when needing to steer an election the direction they want it to go. When you commit ballot stuffing, pre-printed votes, no-signature-verification, no voter ID and vote harvesting, what’s to stop them from having illegal immigrants vote? They’ve already collected their names; without worrying about verification, just fill in the blanks and you’re golden!

1
Reply
CaptBill
Reply to  Deplorable Me

…not only are the enemy combatants ill-educated, they have no American Spirit for the value of a Judeo -Christian Representative Republic
I think that is a major point of the enabled invasion