Do your damned job, Garland 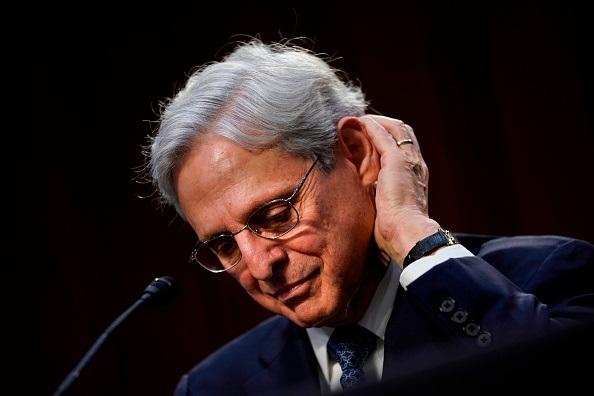 Be thankful Merrick Garland is not on the Supreme Court. He is an absolute disaster as Attorney General. Oh sure, he’s great at tarring moms and dads as domestic terrorists because they want to know what sort of trash is being stuffed into their kids’ heads. He sucks at everything else.

HIs DOJ won’t prosecute someone who tried to set fire to a police car during the Floyd riots but he’s happy to toss a disabled vet who was present for the Jan 6 protests but never entered the Capitol into solitary for 49 days.  He’s “watching” the Jan 6 committee kangaroo court but totally ignoring real violations of the law and outright threats of violence.

Specifically, Garland is refusing to enforce this Federal law:

Whoever, with the intent of interfering with, obstructing, or impeding the administration of justice, or with the intent of influencing any judge, juror, witness, or court officer, in the discharge of his duty, pickets or parades in or near a building housing a court of the United States, or in or near a building or residence occupied or used by such judge, juror, witness, or court officer, or with such intent uses any sound-truck or similar device or resorts to any other demonstration in or near any such building or residence, shall be fined under this title or imprisoned not more than one year, or both. Nothing in this section shall interfere with or prevent the exercise by any court of the United States of its power to punish for contempt.

It is a violation of Federal law to attempt to threaten or intimidate judges and jurors. And there’s plenty of violation going on.

Pro-abortionists continue to protest outside the home of Brett Kavanaugh undeterred, even after an assassination attempt. The left-wing group Ruth Sent Us published the home addresses of the conservative Supreme Court Justices, the irony being that the namesake Ruth Bader Ginsburg would never have approved.

It’s even worse for Amy Coney Barrett. Ruth Sent Us is calling for protests at Barrett’s home and church.

Activist group Ruth Sent Us is advocating for protests outside the home, church and children’s school of Supreme Court Justice Amy Coney Barrett over her fierce opposition to abortion.

The pro-choice activists have been holding weekly protests outside the Virginia home of Barrett after the leaked Supreme Court draft opinion suggesting they may overturn Roe v Wade, paving the way for a national ban on abortion.

On Wednesday, Ruth Sent Us tweeted: ‘If you’re in the DC metro area, join us. Our protests at Barrett’s home moved the needle to this coverage.’

Even her kids are being put into the crosshairs.

Rise Up 4 Abortion Rights has joined the harassment program. They make it pretty clear that they intend something, perhaps even violence. The protests are getting very ugly

Pro-abortion activists dressed in blood-soaked outfits and brandishing dolls held a protest outside the home of Supreme Court Justice Amy Coney Barrett on Saturday as the court is poised to overturn Roe V. Wade in the coming weeks.

The group also carried dolls and wore white pants with blood stains around the crotch, which they said represented an increase in the number of forced births that would take place if Barrett and her fellow conservative justices strike down Roe v. Wade. 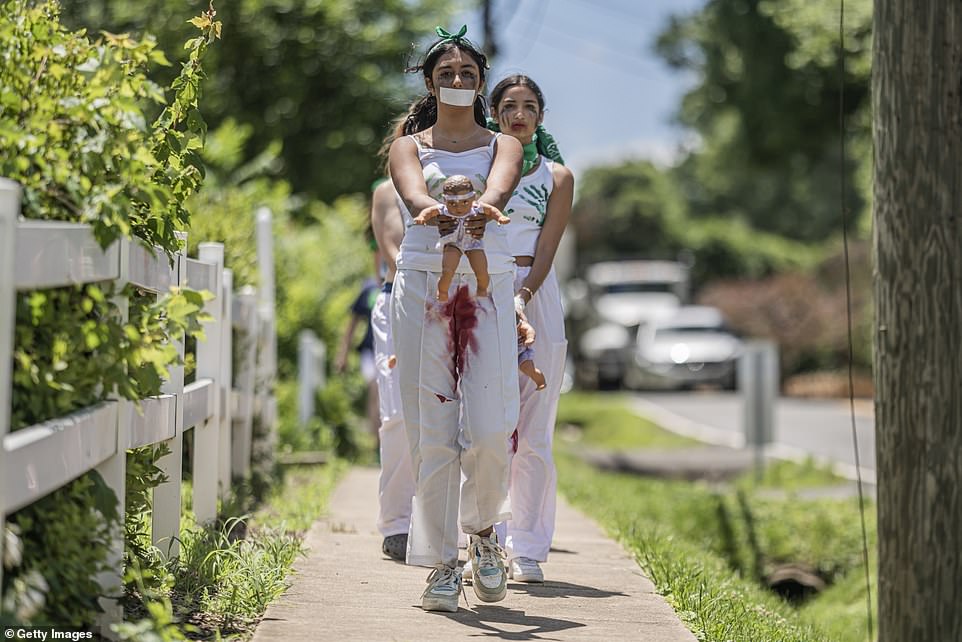 The threats are ramping up. I had no idea how many radical abortionist groups there are. “Jane’s Revenge” is overtly threatening violence

The next step is carrying that anger out into the world and expressing it physically.

Consider this your call to action.

On the night the final ruling is issued——a specific date we cannot yet predict, but we know is arriving imminently——we are asking for courageous hearts to come out after dark.

Whoever you are and wherever you are, we are asking for you to do what you can to make your anger known.

We have selected a time of 8 pm for actions nationwide to begin, but know that this is a general guideline. There may be other considerations involved in planning time and place. We do not claim to speak for every community or crew. We are simply calling out to you. And we hope you answer our cries.

“To those who work to oppress us: If abortion isn’t safe, you aren’t either. We are everywhere.”

23 pro-life organizations have been vandalized in recent weeks, egged on by the likes of Chuck Schumer and Lori Lightfoot.

Garland continues to watch butterflies outside his office and plot against school moms and dads and send SWAT teams to arrest various Trump associates and send the FBI to put those who defy a subpoena from a highly dubious partisan hack committee in leg shackles and thrown them into John Hinckley’s cell.

Meanwhile there are real Federal laws being violated and people are in real danger. Crime is exploding all over the country.

Garland is the organ grinder’s monkey, chained to Biden and the DNC and doing their bidding instead of acting on the behalf of the people of this country. He sucks as Attorney General. He would have sucked even worse as a Justice of the Supreme Court.

Garland will be impeached in January 2023

He is an absolute disaster as Attorney General

But he’s doing an excellent job at turning the DOJ into a weapon of the Democrat party.

There are clear calls for violence being sent out a d the actions of BLM/ANTIFA make it certain the violence WILL occur, but I guarantee there are no FBI assets infiltrating these violent pro-abortion groups to stop them. They’ll just blame “white supremacists”… again.

This is yet another example of how anyone still thinking that justice will be served in Spygate is living a pipe dream. The only way to stop the two tiered justice system is to take full control of Congress as well as the presidency with people who have a spine. Then we can begin eliminating the dems’ corrupt power apparatus by reorganizing the federal government. With full control of the purse strings, the corrupt alphabet agencies can be eliminated starting with the FBI. President Trump or President DeSantis can appoint a state AG for AG to clean out the DOJ. No more swamp creatures like Barr. They can shitcan the military hierarchy and bring back some of the retired warriors Obama got rid of and replaced with these woke ass social justice Marxist yes men. They can also take some of the generals out of the National Guard and put them in charge since they won’t be compromised like the Milley’s out there are. It’ll take time but we cannot continue like this.

0
Reply
Deplorable Me
Reply to  another vet

For sure, our government needs to be “fundamentally transformed” back into the configuration that served the PEOPLE, not international interests. Democrats have proven themselves incapable and disinterested.

he has no business involving himself in this

The Russians must be “white supremacists”.

When he does his job, you aren’t going to like it.

January 6 was exactly what it appeared to be. The threat Trump poses to the Constitution, the rule of law, and what remains of Republican Party as an honorable American institution is real. Life-long republican conservatives of impeccable integrity who were witnesses to what happened are clearly telling you that.

This isn’t about a political agenda. It’s about saving the nation that the Founders created.

Any of the republicans who testified today would have made a far better president than Donald J Trump. It’s not like you have no other choices–assuming you can still take back control of your own mind.

The first step is to listen to the testimony, and understand what they’re saying.

Then you might listen closely to what Eric Greitens said in his political ad.

Schiff was instrumental in pursuing the Russiagate coup. Now he talks about the awesomeness of peaceful transition, the same peaceful transition which he denied Trump. Truly one of the most loathsome people in America. https://t.co/1aBXKhLC1f

Don’t listen to Schiff if you don’t believe him, or any other democrat. Listen to Rusty Bowers and Secretary of State Raffensperger, and to all of the other republican witnesses. They’re telling you something they know, that’s very important. They’re all taking serious political and personal risks to do so.

If these men and women don’t have integrity, nothing of the sort exists. Anyone who believes that it doesn’t really exist has no place in public office.

The UnSelect Committee is a clown show. Figures you would be gullible enough to get sucked in as you have many, many times before.

Thank you very much. It is painful to have friends who have been such a help to me turn on me with such rancor. I may in the eyes of men not hold correct opinions or act according to their vision or convictions, but I do not take this current situation in a light manner, a fearful manner, or a vengeful manner. I do not want to be a winner by cheating. I will not play with laws I swore allegiance to. With any contrived desire towards deflection of my deep foundational desire to follow God’s will as I believe He led my conscience to embrace. How else will I ever approach Him in the wilderness of life? Knowing that I ask this guidance only to show myself a coward in defending the course He let me take — He led me to take.

That’s what an actual conservative Republican patriot sounds like, in case some have forgotten. He took the thoughts from his diary.

That’s what someone pressured to read a statement provided by Democrats says.

I doubt he even believes it. ANY of it. No one does. It simply reinforces their bias and prejudices and they are grateful to have it.

That’s odd… I didn’t catch the cross-examination of those witness with any questions about the veracity or context of their comments. OH… that’s right. There IS no cross-examination in a kartoon kangaroo kommittee hearing. That would distract from the one-sided, pre-determined, biased, partisan conclusion.

There was massive, widespread fraud. The election was stolen. Democrats and FBI instigated the riot. Now they exploit their handiwork. The End.

I suppose if you could distinguish truth from lies and integrity from craven dishonesty, you wouldn’t have put on your Trump hat to begin with.

Maybe you’ll get your cross examinations when Trump is finally dragged into a state or federal courtroom.

He is utter scum and, when Republicans achieve a majority, should be censured and, if possible, removed. And Pelosi. And Swalwell. And Nadler.