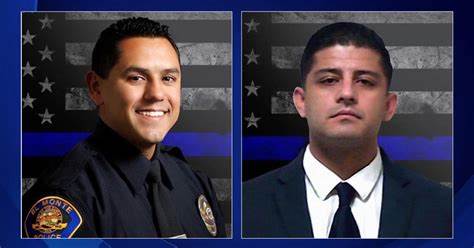 Two El Monte California police officers were shot and killed on June 14 while responding to a report of a stabbing at a local motel.  They were identified as Cpl. Michael Domingo Paredes and Officer Joseph Anthony Santana.

Paredes, 42, had served as a full-time officer with the department since July 2000, working several specialized assignments before achieving the rank of corporal, officials said. He started his law enforcement career as a cadet with El Monte police.

Paredes leaves behind his wife, a daughter and a son.

Santana, 31, initially joined the San Bernardino County Sheriff’s Department in September 2018 and worked at West Valley Detention Center in Rancho Cucamonga, Sgt. M. Higgins, a SBCSD spokeswoman said. He was hired by the El Monte Police Department in 2021. He also previously worked with the city as a part-time public works employee prior to his law enforcement career.

Santana leaves behind his wife, a 9-year-old daughter and 2-year-old twin boys.

The El Monte police chief said, “And believe me … these two men were loved.”

Geroge Gascon killed them. He didn’t pull the trigger, but he might as well have. Justin Flores pulled the trigger. Have a read about Flores:

Cop-killer Flores had been prohibited from carrying a gun since 2011, but was free despite pleading no contest in February 2021 to possessing a firearm as a felon, the Los Angeles Times revealed Wednesday. That gun conviction could have sent him to prison for three years. Instead, he was sentenced to two years’ probation and 20 days in jail, which he’d already served, a prosecutor said at a plea hearing.

He was warned that if was found with any weapons — including guns, ammunition and knives — he could still get that three-year prison term, the LA Times said. His probation officer had filed a request for a revocation hearing for “desertion” on Monday, just a day before the slaughter, the outlet said.

He had been accused of attacking his girlfriend — but was not arrested, with officials only saying they were “currently investigating” why not. Flores — who had “Quiet” tattooed on his face, marking his allegiance to the Quiet Village gang — had stabbed his ex-wife, Diana Flores, just days earlier, she told NBCLA, a clear violation of his probation. He was trying to confront her at the motel where she was hiding from him Tuesday when he opened fire on the two officers, she told the outlet.

LA DA George Gascon freed this dirtbag and the lives of two cops was the price. Just two weeks I wrote about Gascon:

Since Gascon took office in 2020, Los Angeles has seen a 34% increase in homicide, 15.5% increase in violent crimes, 6.7% increase in property crimes and 67% increase in shooting victims. Arrests have decreased by nearly 25% since 2020, according to LAPD statistics.

Gascon’s legacy of destroying the lives of crime victims can be found here. This is what “progressive” policies gets you.

Gascon is an accessory to murder and should be tried as such. Left wingers clamor for holding gun manufacturers responsible for shootings. When can we hold Soros-backed scum like Gascon responsible for his actions? Gascon should be recalled with all haste and then tried for murder.

God damn you, Gascon. May you burn in hell. And frankly, damn all who voted for him.