When Mayra Flores won a special congressional election Tuesday, she made history in more than one way. In Washington, D.C., she’ll be the first woman born in Mexico to serve as a Republican in Congress. She’s also helped the GOP secure its most-desired dream for this year in South Texas: for the first time since Reconstruction, a Republican will represent the Rio Grande Valley in Congress.

…Winning a district that’s more than 80 percent Hispanic, with a candidate who was born in Mexico and worked the cotton fields in her youth, could do big things for the Republican party.

The district she won in has been solidly blue going on four decades. It voted for senile old Joe Biden by +13 points.

Elon Musk, the new kingmaker it seems, said he voted for Mayra and it was the first time he had ever voted Republican in his life.

I voted for Mayra Flores – first time I ever voted Republican.

Signs of Ronald Reagan back in his day:

Welcome to the Republican Party! We welcome all walk aways from all walks of life. The party of opportunity, prosperity, and freedom is here to stay. We look forward to working together and building a better future for all of America 🇺🇸 🚀 #SaveAmerica #TX34

It appears that many people are finally sick of the Democrats. Biden’s popularity continues to crater with no signs of slowing down. Trump had a higher approval rating at the same time in his Presidency.

The Democrats have tried and tried to start some kind of movement on their pet issues. But those pet issues are not what the average American cares about. Just look at this poll from Rasmussen showing what Americans care about and what the MSM cares (99.9% Democrat) about: 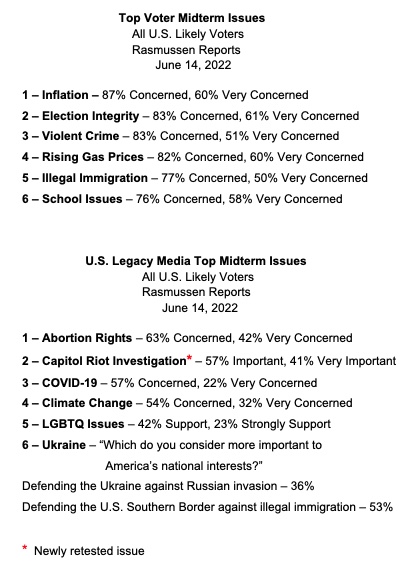 They have turned their back on everyone but their pet groups ie. abortionists, LGBTQ, climate alarmists and the like.

The average American cares about crime, open borders, gas prices, inflation, and the right of parents to raise their kids…not teachers.

Hispanics are beginning to see that the party that cares about those things is Republican. The party they used to vote for doesn’t care about them unless they’re transgender, believe in open borders, believe in abortion until birth, believe humans are responsible for climate change, and believe in raising their taxes to pay for those things.

The radicalization of the left has turned them against them and they know it.

Just look at the district Mayra won in. The open border allowing thousands of people, many criminals, was a major factor in that end result.