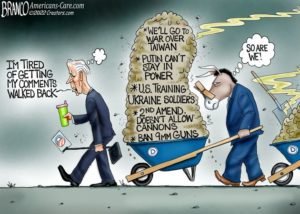 Welcome to Day 507 of the President Sponge Brain Cr*pped Pants* occupation! Lighter than normal post this week, just in terms of no commentary on the links. I did a lot of writing this week, and if you missed them links will be at the end.

6/4 – A SENSIBLE POSITION ON CRIME AND GUNS

6/8 – Democrats Yell ‘Do Something!’ On Guns While Their Prosecutors And Policies Create Our Culture Of Crime

6/10 – The three phases of transgender ‘progressivism’

ICYMI – I published a four part series this week. It’s probably the heaviest material I’ve written in my years of blogging, and if you haven’t already seen it check it out. Any shareing would be greatly appreciated:

Only thing more remarkable than DOJ not leaking the list is that no one in the media cares. Doesn’t that seem odd? pic.twitter.com/JEK4TErABB

Disarm the populace so that the only weapons are owned by the government that made overly broad restrictions, arrested dissenters, and forced you to stay in your home and off beaches and parks, and out of church on Easter.

Login
wpDiscuz
90
0
Would love your thoughts, please comment.x
()
x
| Reply
‹ Back to Categories