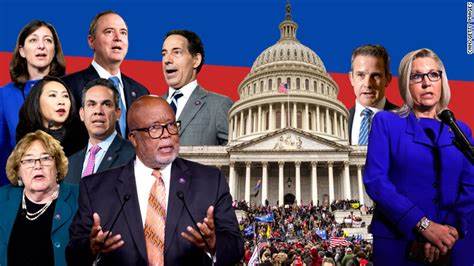 Take your pick. Any one of the could describe the Jan 6 committee. You could also call it the “Kill Donald Trump’s political viability” hearings.

The committee itself is illegitimate as Nancy Pelosi blew off the rules to make sure it was 100% partisan:

H.Res. 503, requires that the committee be composed of thirteen members, five of whom “shall” be appointed after consultation with the Minority Leader

Kevin McCarthy appointed Jim Jordan and Jim Banks to the committee and Pelosi removed them.  Because of that, there will be no questioning of witnesses by the opposition because there is no opposition. Liz Cheney and Adam Kinzinger are the two stooges masquerading as Republicans on the committee. Blinded by their hatred of Donald Trump, they have little interest in the truth and have become the faithful servants of Adam Schiff and Nancy Pelosi.

Really? Imagine, for a minute, that the so-called “insurrection” played out. Let’s say that the protesters actually took control of the Capitol and the vote counting process. Then what? They halt it?

And then what? They hold hostages in demand for an attempt to change the vote outcome?

Is there a single person in his or her right mind that believes any of that kind of disruption would remain recognized as a legal proceeding? Does anyone think the protesters would somehow be recognized as the legitimate government? Or, once the scofflaws are removed and order is restored, do the proceedings continue on as before suffering only a delay?

Give me a break.

PolitiFact is widely recognized to be a partisan operation which plays loose with the truth. There is evidence that Trump authorized the Guard.

On the evening of January 5—the night before a white supremacist mob stormed Capitol Hill in a siege that would leave five dead—the acting secretary of defense, Christopher Miller, was at the White House with his chief of staff, Kash Patel. They were meeting with President Trump on “an Iran issue,” Miller told me. But then the conversation switched gears. The president, Miller recalled, asked how many troops the Pentagon planned to turn out the following day. “We’re like, ‘We’re going to provide any National Guard support that the District requests,’” Miller responded. “And [Trump] goes, ‘You’re going to need 10,000 people.’ No, I’m not talking bullshit. He said that. And we’re like, ‘Maybe. But you know, someone’s going to have to ask for it.’” At that point Miller remembered the president telling him, “‘You do what you need to do. You do what you need to do.’ He said, ‘You’re going to need 10,000.’ That’s what he said. Swear to God.”

Even more about the wholly inept and biased PolitiFact here.

Why weren’t they deployed? The finger pointing is astonishing. One AP report says that Bowser requested the Guard but the Capitol Cops refused.

Mayor Muriel Bowser had warned of impending violence for weeks, and businesses had closed in anticipation. She requested National Guard help from the Pentagon on Dec. 31, but the Capitol Police turned down the Jan. 3 offer from the Defense Department, according to Kenneth Rapuano, assistant defense secretary for homeland security.

Another says Bowser requested only a minimal number of unarmed troops and mostly for traffic control. Yet Bowser herself did tweet

“To be clear, the District of Columbia is not requesting other federal law enforcement personnel and discourages any additional deployment without immediate notification to, and consultation with, MPD if such plans are underway.”

Which puts the AP report into the dumpster.

The former chief of U.S. Capitol Police says security officials at the House and Senate rebuffed his early requests to call in the National Guard ahead of a demonstration in support of President Trump that turned into a deadly attack on Congress.

Former chief Steven Sund — who resigned his post last week after House Speaker Nancy Pelosi called for him to step down — made the assertions in an interview with The Washington Post published Sunday.

Sund contradicts claims made by officials after Wednesday’s assault on Capitol Hill. Sund’s superiors said previously that the National Guard and other additional security support could have been provided, but no one at the Capitol requested it.

That points the finger at Pelosi and McConnell, who also should be made to testify. Then there is an issue with the timeline.

But Pelosi is the mayor of the Capitol. It is her job to see that it is protected. An internal review found “sweeping intelligence, security failures on Pelosi’s watch.” Among them:

Specifically, the report stated that some Capitol Police leaders had received intelligence from outside sources like the FBI warning of the strong potential for violence, including the targeting of lawmakers, on the day Congress certified the 2020 election, but those warnings were not properly distilled into the operational plan given to front-line commanders or highlighted in the summary section known as the “Bottom Line Up Front.”

She disbanded “the department’s open-source intelligence unit that scanned for threats on social media.”

The Capitol cops simply were over their heads- they weren’t ready for anything:

But the after-action report found there was sweeping blame to be shared by the Capitol Police leadership, citing failures as large as poor communications, staffing, equipment and preparations and as small as doors to Senate areas that did not lock properly and elevators leading to a sensitive floor of the complex that did not get secured during the mayhem.

They were slow to respond:

This security force gets half a billion dollars every year, which is more than is allocated to the entire Detroit police force.

For what? Where is this money going?

The Kangaroo Committee won’t concern itself with any of this. The truth is not important here, nor is preventing another such incident. It will be the “Kill Donald Trump” hearings. If we don’t hear from Muriel Bowser, Nancy Pelosi, Mitch McConnell, Steven Sund, Kash Patel, Christopher Wray and Chris Miller all under oath this will be another colossal waste of time. The most important of the outcomes from this committee will go wanting.

A Russian Collusion Redux, but worse.

And always remember- these are the same liars who sold the country on Russian collusion for four plus years.

Login
wpDiscuz
100
0
Would love your thoughts, please comment.x
()
x
| Reply
‹ Back to Categories