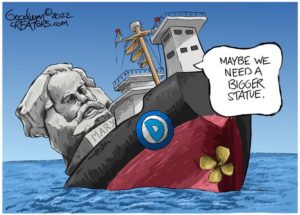 Welcome back for the final installment in this series! To get any newcomers caught up, in Part 1 I thanked God for 2020. While that first part was mainly a personal story, it was needed to set the stage to show where my head was when, in Part 2, I asked America Has Fallen – How Did This Happen? This led us to Part 3 where I dispelled any false notions anyone on either side had of an easily won civil war if the US were to split with If We Want to Restore America We Have to Get Real.Now in our final section I’m going to offer some solutions. This is not going to be one of those broad, sweeping essays on how we restore our country. This will differ from most posts on this subject, which generally run along the lines of ,”To win our country back we need to reclaim education, solidify the candidates we run, etc” and other high level ideas. They’re usually well written, so what I’m not doing that here is try to rewrite that, as that story has already been told be people a lot smarter than me. Here is a good example of one. Or here’s another good post that is mostly high level with a few basic tactics at the end.

What this post will be instead is advice on something you can personally do. And it’s simple. Do you know what that thing is? Go out and do one thing. Seriously, that’s all. And don’t just like and share this post (which of course, everyone should be doing!), get out and do something physically that you aren’t doing now. Once you’ve got that one thing down or established in your routine, find something else. If that sounds dopey and overly simplistic, think about it. If every one of us Normals took action, even something relatively small, think of the impact it would have. I personally tried to get involved with election monitoring last fall here in Virginia, but I had bitten off more than I could chew, between dealing with some residual of the events I mentioned in Part 1 and a few other things I had volunteered for. Luckily others picked up my slack, and I still managed to spend some time doing mentoring for students in my old high school and college. I know that what I did is not much, but if advice on avoiding my many career mistakes helps keep them from screwing up and wallowing in self pity, they’re a lot less succeptable to Leftism, right? I know it’s not much, but given where I was t the time it was a start. And I’m building on it.

The America we knew and loved is gone. While we can not bring it back, we can decide what it’s going to be. We will, because letting the other side make that choice would be cultural suicide. What follows is not so much as an essay, but steps and links on how you can find simple actions you can take and start making a difference. Every story linked here will have some specific advice, so take what you will of this. Loosely organized, here are categories ready for you to find your spot:

Join the battle to help your kids.

The last link gives how you do it. Last summer I went into why you should. I also wrote a separate post on how to support your college aged kids or grandkids.

Fight to get CRT out of our schools

Push back on any attempts to start a Satanic club. Just be careful how you do it.

Don’t like your local public school? Create your own! Yes, seriously!

And after school, pay attention to what your kids are watching on TV!

Let them know we’re coming: And we’re bringing Hell with us

Next, build on it – make your voice heard and carefully recruit your allies.

When the Lefties begin infesting, fight to keep your red state red

How to win – It’s a 48 minute video on how to get involved in local politics, and here is the background on The Precinct Project. Anyone can do this. And this notion of us Normals doing grassroots organization terrifies The Radical Left.

We can ballot harvest, too. Where legal of course.

This section is not so much something that Joe or Jane Citizen might be able to lead, but is more for bigger ideas where we can offer our support and assistance.

Indiana’s AG sues Black Lives Matter. To which I ask, why has every state and city victimized by these domestic terrorist not done the same?

The Virginia Project – Granted, the election was most likely won by Terry MacAuliffe making the mistake of being publicly honest how much disdain Democrats have for parents of school kids. That said, victory for us Normals probably would not have happened without a disciplined campaign supported by dedicated foot soldiers.

Lay siege to the institutions. Disney is the case study for this post, and toward the end it gets into action items.

8 lessons from Ron DeSantis may be more useful for leaders, but Ron’s actions show traits we should look for in any elected officials we support

Is it time to investigate the ties between Russia and the Green Movement?

Don’t treat the press like any kind of honest actors. This has advice for both politicians as well as citizens.

On a similar vein, here is where one twitter user exposed the top fluffers for Governor Fredo Kevorkian for what he did in New York during the lockdowns. And a similar post on apologists for Stacy Abrams. Here is how USA Today stealth edited for her.

Ohio’s AG sued Google to regulate it as a public utility. On that note, unleash the trial lawyers!

Want to get away from Leftist controlled financial companies? Try a company that puts “Excellence over politics”

Get off of Gmail before the day that they decide to lock the accounts of Normals everywhere – migrate to Protonmail instead.

For that matter, get away from Google in general.

And here’s how to get away from a few of the other Tech Bigs, such as Facebook, Instagram, etc.

Here are a few tips to fortify your smart phone.

And to take this a lot further, here is a list of woke companies to avoid. Don’t get depressed if you can’t avoid all of them. Pick and choose your targets, and if you’re short on options, migrate from the worst companies to just the bad ones.

And suddenly, those prepper skills you picked up during quarantine no longer seem so crazy.

Think Outside the Box

Now there is a corporate cliche from the 90s that I don’t miss! But that doesn’t mean it didn’t have some value. For example… 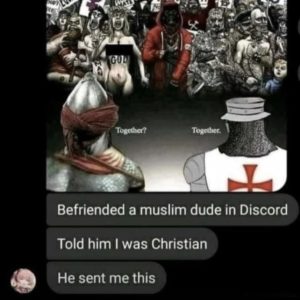 OK, I know that Islam and Western cultrue are not exactly compatible, but don’t be closed minded about temporary alliances against common enemies

There are a lot of feminists who are tired of being seen as nothing more than abortion vessels, bathroom rape victims, and cannon fodder for men in school sports. Reach out to them

Play fair and lose, or bend your principles to defend liberty

Don’t sell ammunition to anyone who voted for Biden*

Support student loan forgiveness – but do it the right way!

We can get behind any politicians still bitterly clinging to the defund the police movement.

Is your company pushing woke seminars on you? Push back.

And don’t be afraid to call the trans movement child abuse.

Expose organizations that try to go stealth woke, such as what happened with The Salvation Army.

Are you 90 percent white and 10 percent black? Demand affirmative action!

Be a swamp fox. Here is where you can have some fun, using The Radical Lefts’ own tactics against them.

And if, heaven forbid, Part 3 comes to pass, here is some urban warfare advice offered to those defending Kiev from the Russians.

And that’s all folks! These four posts might have been the heaviest subject matter I’ve written on in my decade of blogging. Thanks to all who’ve read, and special thanks to everyone who joined the conversation in the comments!\

And just because, closing this with Charlie Daniels’ “In America” just seems right.

“I’ll take responsibility instead of blaming others.”
— Joe Biden, 2020 pic.twitter.com/PNG1F5EN85