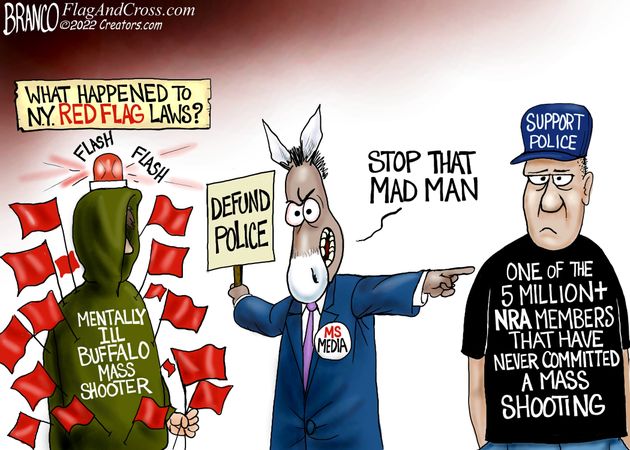 No, I haven’t lost my mind, and no, I’m not trolling my fellow Normals. To quickly sum up where we are right now, PJ Media’s Kevin Downey Jr. pulls no punches:

I bet Don Lemon only prays when there is a mass shooting. “Please, God, let the gunman be white.”

The lefty sitzpinkler at CNN came up with snake eyes yesterday because the shooter is Hispanic. That changes the narrative for the left. Here is their playbook:

When the shooter is white, the problem is “white supremacy.” White people are evil and here is the proof.
When the shooter is a minority, blame easy access to guns, usually by attacking the NRA, which is run by “selfish, conservative, white, gun nuts.” The race of the shooter has nothing to do with it. Bury the story and move along.

Those of you who are paying attention might be thinking, “Hey Bob, didn’t you post this exact same article two years ago?” And you would be correct. But given the insane behavior we’ve seen, between CNN claiming that Tucker Carlson is responsible for the Buffalo shooting, Barrack Hussein Obama eulogizing a drug abusing criminal, to Beto Male O’Rourke unsuccessfully crashing a press conference, and don’t even get me started on what President Biden’s* handlers have been loading into his teleprompter to deliver the “unity” in America he promised, this called for a repost.

OK, I know what you’re thinking – you’re obviously skeptical of a proposal like this coming from a Conservative who claims to respect the 2nd Amendment. Bear with me, though.

I could throw out stats like actual numbers trying to tie gun ownership to violent crime. I could trot out the CDC’s own study regarding the use of guns for crime versus self defense. How about the lies that the gun grabbers like to use? Or maybe the many areas where the government broke down prior to and during the Parkland shooting? Even the Santa Fe shooter, while not obvious at first, hit a few checkboxes.

We could look i another direction, such as a year in violence against Conservatives.  How about a hate map showing these crimes? You know, like what the SPLC uses, only this one is real! Or maybe Salon calling on a hunt for Christians?

No, I want to keep this as simple as possible. We want to stop mass shootings, so let’s keep the scope of my proposal narrow. Let’s start by looking at not what instrument is used, but who is initiating the violence? First, we know that members of a particular religion have a tendency toward violence. In fact, we can further not that this particular religion is responsible for the vast majority of domestic terror. Next, we can look at a commonality among mass shooters. Read the last three links before you go any further. Do you see something that these groups have in common? Most of these people come from a particular religion and tend to vote for a particular party. So if we want to end mass shootings, the solution is simple:

All Democrats shall be forbidden from owning firearms of any kind.

Sure, this is going to sound like a bad idea, and I’ll acknowledge that it has many flaws. For example, what about the many Democrats who serve honorably in our armed forces and in law enforcement? Of course they would be allowed to carry weaponry while on duty, but only if supervised by a ranking Conservative. And said arms would have to be turned in at the end of any shift. Remember, this is for the children.

What about existing gun owners? “Try to take ’em from me!” is a popular Conservative refrain. Since we know that Leftists love to lead by example to avoid charges of hypocrisy, I expect 100% compliance. And if we don’t want to try forcibly taking guns from noncompliants, we could simply take away their right to vote until they do. Sure this is tough, but what about the kids?

And then there are the cases where kids take their parents’ guns to commit crimes. This is another tough one – Perhaps we could mandate that any gun owners whose kids are in public schools would be required to take extra measures to secure their weapons. If anyone wants an exemption their kids could take a test to ensure that they haven’t been indoctrinated by their teachers. Nothing too tricky, just simple common sense questions such as “How many genders are there?” or “Che Guevara – Hero or racist, anti-gay murderous thug?” You get the idea.

Of course, there’s the simple counter argument “What about Conservatives? Do they not commit crimes too?” Of course Conservatives do! But where you don’t see our side is in the mass murder category. Remember, we’re not pretending that we can eliminate crime altogether here, just mass shootings!

Sure there are other issues this post doesn’t address, such as those pesky things like due process and the 2nd Amendment, but given how much disdain The Radical Left has for those why would they object?

Let me know what you think in the comments!

And that’s where  we left off two years ago. What say you Lefties? We Normals are ready to meet you halfway – are you ready to take meaningful action, or do you hate our children?

Guy who demonizes 80,000,000 voters as white supremacist domestic terrorists very concerned he may be failing to win them over. https://t.co/22ONt1FBMk

I’ll tell you one thing, in all seriousness; anyone that participated in the year-long leftist pogroms should be banned from gun ownership. So should any “transgender”; they are most definitely mentally ill.

You think anyone targeted by the FBI because they supported the January 6th rally (not just the FBI useful idiots that participated in the riot) will ever be able to legally purchase a weapon? Their background check will have more flags than a used car lot.

If the left wants to do some gun banning, let’s all agree to begin with them.

because they supported the January 6th rally

No doubt it was attended by numerous van der Luub’s.

Your solution does not also address mental health. Statements and actions by Democrats after the school shootings is evidence they are quite insane. We could go down the road of the UK no guns for anyone, I think they now include cutlery, they will soon live in the land of silicone sporks.

To some degree it does. Without looking up any research, I’d guess that far more mental health issues happen on the left – anciety over Climastrology, Wuhan Flu, infantice is healthcare, the inability to see a senile president, or for that matter, believing that a cheap Chicago politician is the second coming of Christ. I know there’s crazy on our side too, but I have a feeling the majority os them.

Like in invasion of the body snatchers if they see a sane one in their midst they attack….
See elementary school councelor under investigation for immoral conduct
There is an article in the Daily Caller.
The Wisconsin DPI’s Licensing website lists Darlingh’s license status as “under investigation.”

Listened to a very interesting podcast. The interviewee commented that what we are seeing within the current societal culture is an upward and then a downward scenario. Case in point.

The Marxist left screamed defund the police post floyd. The politicians local, state and federal responded; the people have spoken and we must react. Take any issue where the mob on the left demands something be done and then there is generally political reaction. The interviewee posited it was a coordinated effort referencing similarities to the color revolution concept.

Or go precisely according to plan.

To Liberals Code Stink(Pink)Every Town for Gun Safety,Mayors Against Illegal Guns(Guns not held by their Bodyguards)quit parading around on the courpes of the victims of someone who should not have been roaming the streets