Will the Genius of the Transgender Movement End up Being its Downfall? (2 of 4) 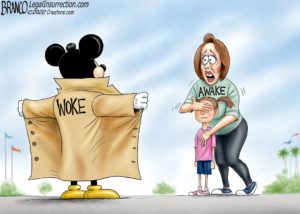 First off, I am fiercly against these efforts to mutilate our children. When I say the “Genius” of the movement, I am only pointing to the success that its advocates have achieved toward their goals, no matter how vile. This is akin to pointing out that the attack on Pearl Harbor was a brilliant tactical victory for Japan. Of course, while the attack itself may have been tactically brilliant, the end results of the attack would turn out to be strategically foolhardy. And now that I think about it, Japan’s attack on Pearl Harbor might be a pretty good analogy for the trans movement’s attack on American culture. When the movement moved beyond acceptance to grooming children for irreversable decisions it truly became malevolent, and simply another prong in the war being waged by the Radical Left to destroy America. While they were able to wage this war in relative anonymity they captured a lot of ground. But now that a bright light is being shone on them, the Normals are none too happy. And now we’re entering into some long overdue pushback.

In the last installment I asked the question, “Will We be Remembered as the Generation That Declared War on Our Children?” And before we go any further I should clarify the trans movement that I’m condemning. If you were born with a man’s body and have always felt more like a woman or vice versa, I genuinely sympathize for you. I get that it’s hard to live your life, and if you’re just trying to live your life I wish you well. And you’re not the ones with whom I’m associating the movement. Now that all of the disclaimers are out of the way let’s proceed with the Pearl Harbor segment of this post and note some of their “success” stories:

The State of Oregon forced mutilation on a 16 year old girl, among a few other parents’ horror stories

From the bathroom battle:

“In October last year, magically following right on Obama’s trans mandate, three transgender students sued their Pennsylvania school district “for the district’s implementation of a “sex-specific” policy requiring students to use restrooms that match the sex they were assigned at birth.” Never mind that the kids were seniors and “[a]s an alternative, transgender students also can use a unisex bathroom or the private bathroom in the nurse’s office.”

A Pennsylvania judge appointed by Obama ruled in favor of these teens’ demands, saying requiring people to undress with those of the same genetics and body characteristics “violates their civil rights.” Tell me, if you were in high school and had a problem with an administrative decision at school, would you file a lawsuit? Probably not. If so, would you hire one of the best LGBTQ lawyers in the country to represent you, as these teens did? I wonder how they got that idea, and the money.”

War is being waged on Christian adoption agencies.

Pediatricians have had their field infiltrated.

A Texas Dad was Court-Ordered To Not Call 6-Yr-Old Son ‘He’ As Ex-Wife, Transitions Him But Not His Twin Brother

Of course, they’re going after autistic kids too

Wiliam Thomas has been a darling of The radical Left for destroying U Penn’s lady swimmers. That’s great that it’s finally getting national attention, as these girls in Alaska dealt with it back in 2016.

Well, that turned out to be a more extensive list than I was expecting! And William Thomas (known to many as Lia Thomas) may be the Battle of Midway in this front. Thomas gave not only national attention to how the trans movement is engaging in an open #WarOnWomen, but also the silence of the numerous “Feminist” groups has spoken volumes. We also saw woke Sports Illustarted writer Pat Ford notably not stand up for his own daughter getting beaten by a man. The “Acceptance” argument was a lie from the start – we Normals know that there is no room for compromise with The Radical Left. The public is learning how puberty blockers are a danger to childrens’ health. Transgender People are Beginning to Discover They’ve Been Lied To. Pediatricians are pushing back on the junk science. A former Trans person has publicly called out the Biden* administration for supporting child abuse. And of course, we’re also learning that The Studies Cited To Support Gender-Bending Kids Are Largely Junk Science. What I’ve cited here on the pushback isn’t even going into the pandemic shining a light on education and how parents have been reacting. The trans movement has become so emboldened that they’re barely trying to hide their intentions anymore. And this is not going well with the Normals. However much The Radical Left might try to disguise their barbarism with focus group tested terms like “Gender Affirming Care“, let’s start calling this for what it is – child mutilation. For that matter, how is it that a creep who touches a kid’s private parts rightfully goes to jail, but the creep who wants to mutilate kids is considered virtuous? Only in the twisted minds of The Radical Left…

As Bill Whittle pointed out, the trans movement (and much of Leftism) attacks like a submarine. A sub is highly effective, but only while submerged. When a sub comes up to the surface it is highly visible and extremely vulnerable. The analogy might be slightly apples to oranges, but it’s close enough. The biggest similarity is the best part to give us hope – in this case the submarine that is the trans movement will never be able to get below surface again.

Up Next in Part 3: Friendly Advice to The Radical Left: Normalizing Child R@pe Is Not a Winning Issue

If you were born with a man’s body and have always felt more like a woman or vice versa, I genuinely sympathize for you.

Nothing replaces the human body as it was originally developed. I’m sure you’ve seen ads for drugs that address a medical issue but list a long list of side effects. Often, it seems, the treatment is worse than the affliction. Like blood pressure medicine, the BEST solution is to return the body to its optimal condition (lose weight, etc), not take a pill to keep blood pressure low, which carries numerous side effects with it. If you get cancer, the cancer can be defeated, but the side effects (surgery, chemo, radiation) are often terrific. A broken bone will forever be weakened, might leave scars from surgery and will often lead to damaged joints as the person ages. When the human body is altered from its original condition, it cannot be put back into that original condition.

The same is true with thinking we can change a male to a female or female to a male. It isn’t possible without drastic side effects, one of which is that you are STILL the sex you were born as (not “assigned”).

Again, this is not “democracy”. A teeny-tiny minority gets to force the rest of the population to upend their lives to accommodate their idiosyncrasies? We should not punish or sanction them for their ideas, but neither should they impose their ideas upon us… or our children.

1
Reply
Will the Genius of the Transgender Movement End up Being its Downfall? (2 of 4) | First off, I am fiercly against these efforts to mutilate our children. When I say the “Genius” of the movement, I am only pointing to the success that its advocates hav
#1141544

[…] post Will the Genius of the Transgender Movement End up Being its Downfall? (2 of 4) appeared first on Flopping […]

Belguim has a different take on how to deal with mentally ill people, like trans people.
Put them with a foster family, no matter their age, and let that foster family (alone) be the ones who pretend their delusions are real.
It saves the rest of the country from having to buy into the fiction.
Geel, Belguim is the center for this.
Seems healthier to just have one volunteer family pretending with a sicko as opposed to imposing crazy on an entire population…..or else you get cancelled.

Kind of creepy, but marginally better

Red states are mostly border states and get most of the ille...