Will We be Remembered as the Generation That Declared War on Our Children? (1 of 4) 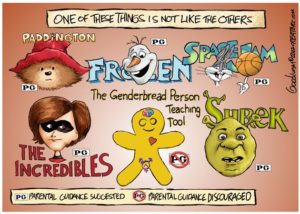 The Radical Left’s War on our Children has been pretty well documented lately. After an incident we experienced a few days ago I was reminded of a few other anecdotes from friends/acquaintances that I’ve heard about. And while anecdotes do not equate data (which I had to remind every Lefty back in the days when the were singing the praises of Obamacare), when you get enough data points together patterns start to emerge. Of the four stories I’m about to tell three are recent, while one is old news. And for obvious reasons I’m being really vague, save for the one that involved the Bob family.

One young kid, who has some social issues, had gotten on a kick of shouting a word that is completely innocuous, but in some setting could be interpreted as racist by someone suffering from late stage Mental Libtardation. The kid said the magic word at school when a photo of several students was shown. While I don’t know the racial makeup of everyone in the pic, more than one person in it was nonwhite, and the mandatory freakout ensued. They (the pronoun I’ll be using for the kids for privacy), was called on to apologize, which they did. Parents were notified, and they explained the rest of the story and the misunderstanding was explained. End of story, right? Wrong. the next day they got served with an in school suspension and the parents were notified that this incident would become part of their kid’s permanent record.

Another kid’s parents made tthe decision to transition their child after some serious discussions when their kid was way too young to even be introduced to this subject. They stated that they had a serious talk with their kid before making this decision, as I was told. Whenever I hear this argument I just want to scream that this doesn’t justify drowning your daughter in the bathtub who thinks she’s a mermaid or pushing your son out a third story window because he thinks he’s Superman. I recall observing something else at the time that made this look like what Kurt Schlichter likes to call “Mommy’s Manchausen Syndrome”.

Another parent relayed the need to get speech therapy for the parent’s kid who needs it, mostly as a result of the child abuse inflicted by the Wuhan Flu lockdowns. The was met with some bureacratic stonewalling, and the administrator that the parent spoke with warning that legal action could take years and would only net a few grand. The admin also offered that other parents in similar situations took out second mortgages to send their kids to private schools. This sounded insanely heartless, and on talking more it sonds like part of this was coming from a bureacrat giving some real talk to manage expectations. or maybe it was a combination of both.

And finally, while at a big extracurricular school event, Little Bob came back to me in tears after he was climbing in the playground and getting kicked and punched in the face by a younger girl. While I should have had him identify the girl and either told her parents or the school attendants, I didn’t want to make LB relive the situation and just got him out of there. I also suggested that responding by punching her in the teeth would not have been wrong (though he would have gotten in trouble, or course). The days of not hitting a girl are long gone from our culture, and I’d rather this girl had learned the lesson sooner than later when the physical strength differences between boys and girls becomes far more manifest. I also learned the next day that another kid got rolled by a group of older kids at this same event. And yes, I know I could have handled this better. Lesson learned.

I’ve heard from another parent at our school how the girls there have become particularly nasty. I’ve also heard from another parent who subs for older kids in our school system that kids everywhere have gone a bit crazy. It’s not a big surprise, as our school system essentially robbed them of two years of their lives, between one year of virtual “learning”, and one year of forcing them to wear masks. So I put it to you, good readers? Am I an outlier? Or is my fear that what I’m seeing is the tip of a particularly dangerous iceberg? I have a feeling that when history looks back on how we handled the pandemic, how we treated our children will get us judged in a particularly harsh light.

Up next: The Genius of the Trans Movement may End up Being its Downfall

Good article, Bob. I teach my kids about the Truth, and they’ve been able to navigate in the Woke school system so far. I don’t like when it’s said “get you kids out of public school, now!” Private schools here cost about 21K. I can pay it, but I’d rather invest in things for my kids than get taxed for expecting them not to have creepy LGBT atheisms forced down their throat (pun intended).

So we’ve been fighting back. Many parents are now coming out and saying they’ve reversed their position on gay and lesbian, and we’re not okay with it anymore.

You are not born gay. You have urges, and you act on them or not. Same for any person.

I’m respectful, but I’m done with this nonsense.

I’m respectful, but I’m done with this nonsense.

That about sums up wehre we are now, doesn’t it?

The admin also offered that other parents in similar situations took out second mortgages to send their kids to private schools.

Wouldn’t the debt just be “forgiven”? I mean, that don’t cost nobody nuthin.

The days of not hitting a girl are long gone from our culture, and I’d rather this girl had learned the lesson sooner than later when the physical strength differences between boys and girls becomes far more manifest.

You could instruct him that in such a situation, he could excuse himself by telling whoever responded to his violence that he identifies as “her/she/oppressed and identified the girl as her/she/bitch/monster/asshole and, therefore, the punch was just between girls. Then they would have merely responded with “Rowrrr!” and walked away.

I think he would have to be a bit odler to get away with that, but it’s probably worth a shot

I watched a video of a couple of middle school girls fighting.
The white girl was smaller and had just been standing around during a class break.
The black girl was huge, tall and hefty.
The black girl sucker-punched the white girl and the battle was on.
The white girl had been studying marshal arts……opps…..wrong white victim to pick!
Every time the white girl got the black girl into submission some men (teachers?) pulled them apart.
But the black girl kept re-starting the fight (definition of crazy, expecting a different outcome.)
She attacked out of the blue each time after being saved by white men.
This went on for a while until the white girl utterly destroyed the her opponent before the men could stop her again.
That ended the fight.

According to obama’s equity in school discipline the white girl got suspended and the bully who started the fight and kept re-starting the fight was rewarded with no punishment at all, reinforcing her to continue in her bad behavior.

The “war on children” has been going on a while.

Pretty much, and right under our noses. At least the blowback has finally started

Today’s children may disown their parents when they understand what has been passed on to them.

You’re fantasy world is getting more and more desperate.

Yeah, right, Today’s children who receive actual parenting, and don’t normalize dead-end monkey-like behaviors, such as pretending your the other gender or aborting children, will the be the only ones to pass on their legacy.

You, Sir, are an outlier! As am i! Not being “near the median” does not make your wrong! In fact;it this case it makes you right!

There are different ways to approach LB’s problem
Bob, go tell the teacher
Grandma, did you ask them to be your friend?
Grandpa, shows LB technics to end fight he learned as a bouncer in a biker bar

Sadly, Grandma & Grandpa are gone, but luckily I have a few tricks, both on the fighting and trash talk fronts to impart…