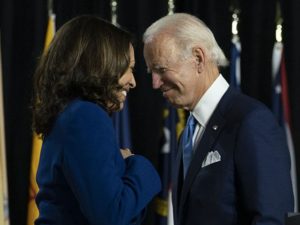 Biden and Harris are failing spectacularly.  Biden’s moronic Executive Orders remind me of a dishwasher that we purchased in 2018.  The motor failed in 2020 and had to be replaced.  The drain pump crapped out in 2022.  Those mechanical failures left me muttering to myself (which I often do) “who designed this crap?” Once upon a time America put men on the moon and now we can’t even  build a kitchen appliance that will last 4 years.

It seems like everything recently has been the victim of planned obsolescence.  Things are intentionally designed to fail. What a tremendous waste of resources!

In my opinion, Biden and Harris are intentionally failing and their dastardly goal is to destroy America. Say it ain’t so Joe.  Do you really think that 81 million Americans actually voted this un-dynamic duo into the White House?  Biden campaigned from his basement listening to the sump pump drain and cackling Kamala is about as warm and cuddly as a rabid hyena with an abscessed tooth, trapped in a briar patch.

Sure, it was all fun and games voting against that bad man Trump and those God fearing, Bible reading, patriotic American supporters who love this country.  Everyone was laughing until gasoline hit $6.00 a gallon, crime and inflation spiked and food became scarce.  Meanwhile, millions of unvetted, sick, poor, illegal, uneducated immigrants poured across the open southern border like a human tsunami and are now overwhelming communities where they were dumped.

Suddenly, people stopped laughing.  Buyer’s remorse has metastasized from sea to shining sea as Americans discover that Trump was right and they were duped. Americans hate being duped and now we are stuck with a president who is exhibiting debilitating cognitive mental health issues. Recently, Biden broke his brain when he tried in vain to read the word kleptocracies on the teleprompter.  “Kleptocrac-,k- k-, yeah kleptocracy…the guys who are in the kleptocracies. But these are the bad guys.”  What moron would write a 4 syllable word on the teleprompter for Joe to read?  Was that done intentionally?

Kamala recently came down with COVID and immediately went into the witness protection program, which surprised no one.  It has been rumored that Kam was recently injured when her disgruntled staff quit and stampeded over her exiting the White House.

This administration is simply planned obsolescence.  Kamala will never be ready for prime time and is now primed to exit stage left.  Biden, who is about as useful as a bag of hair, has exceeded his expiration date.  Joe now patiently waits for his handler behind the curtain to end this charade. Jill will understand when the choir sings,

Hey Joe, it’s time to go
It’s been a blast but
Your use to us
Is now in the past!

Jill already plans to write a highly anticipated sequel to her first blockbuster, “Jill: A Biography of the First Lady,” which sold a whopping 250 copies the first week.  Her new book, “Joe’s Amazing Accomplishments as President,” should be inspiring.

It will be a short book-maybe a pamphet-maybe a Post-It note…..a very, very small Post-It note.

What has been done by biden or whoever else there is behind the scenes has been done intentionally. There has not been one proAmerica policy put forth by the biden regime.
It is complete intentiona destruction.

Biden broke his brain when he tried in vain to read the word kleptocracies on the teleprompter.

Oddly, even before that clunker, joe was claiming we were “accomodating” Putin and the Russian oligarchs.
Does his minder even know what “accomodate” means?

To give what is needed to someone.

To bring to a state free of conflicts.

Was joe being sarcastic?
Is joe “there” enough to even try to be sarcastic?

And Kamala.
She disappeared a few days before she “got covid.”
When she reappeared her throat looked AWFUL!
Bad plastic surgery!
THEN she “got covid.”
This gives her 10 days to fix what was messed up.
I doubt it was really covid.

Just like michelle obama went to see a “relative” regularly, but always came back tummy-tucked and hip-slimmed.

That stupid unfunny idiot Trevor Noah cracked a joke at the Correspondent’s Dinner about high prices and inflation. They all, including idiot Biden, just laughed and laughed. Really funny stuff, people not being able to eat AND fuel their vehicles.

Democrats are owned by elitists that have no idea what a job is, what responsibilities are, what work is and most certainly what honesty is. I am a believer in the two-party system and I think it is necessary to keep the parties honest, but I hope this version of a Democrat party is swept from the field in November. It is simply what should happen.

democrat senate primary winner in Ohio in a recent interview ask whether he would welcome biden to campaign for him responded there would not be surrogates campaigning for him.

The Most Popular President in US History?… Here’s Ohio Democrat Tim Ryan’s Response When Asked if He Wants Biden Campaigning For Him Says it All (VIDEO)

Following its own inspection, which occurred from Jan. 31 to...