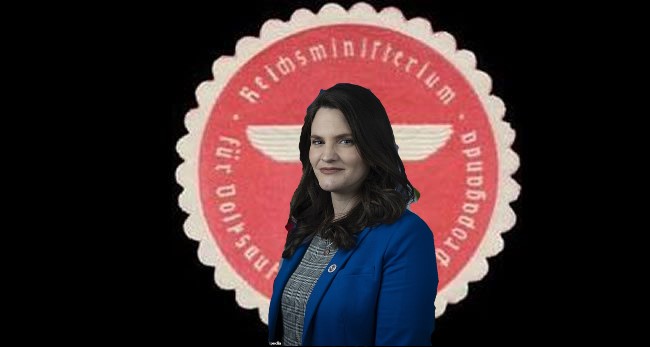 You didn’t think they’d go without a fight, did you?

As liberals go through the five stages of grief over Elon Musk buying Twitter the Bidenazis are preparing for a war against free speech. They need to control the narrative in order to blunt the coming November massacre and as we’ve noted, to the Bidenazis free speech is a threat to democracy.

To combat the specter of true free speech on the Twitter platform, the Bidenazis have formed something called the ‘Disinformation Governance Board.’ The ostensible reason for its creation is to counter online “misinformation.” Alejandro Mayorkas, the Director of Homeland Destruction and architect of the Biden open border policy, said it would help reduce domestic threats to the United States. Domestic terrorists- you know, meaning school moms and anyone who disagrees with the Bidenazis.

(There have been 42 “encounters” with illegals on the terror watchlist or no-fly list and Mayorkas hasn’t the first damn idea where they are.)

The head of the DGB is Nina Jankowicz (seen above), who tweeted that the Hunter Biden laptop was Russian disinformation. She claims she was only live tweeting but in October 2020, “Jankowicz called the laptop stories a ‘Trump campaign product.'” And there’s this

She added that ‘a HUGE focus of our work, and indeed, one of the key reasons the Board was established, is to maintain the Dept’s commitment (sic) to protecting free speech, privacy, civil rights, & civil liberties.’

Jankowicz also suggested last week that she opposes The First Amendment because she thinks it is bad for ‘marginalized communities’ and called Elon Musk a ‘free speech absolutist’ because he wants to make Twitter more open to all voices.

Wait, what? Whose civil liberties are protected by crushing free speech?

Steven Crowder made an interesting remark about the Board:

‘The government is creating a misinformation governance board,’ Crowder tweeted on Thursday. ‘Who else did something like that?’ he continued. ‘Oh I remember, the Nazi’s. And there’s some data showing some interesting things going on post- @elonmusk’s Twitter takeover!’

I thought I’d have a look at that and yes, he’s right. After he came into power in 1932, Adolf Hitler appointed Josef Goebbels the head of the “Reichsministerium für Volksaufklärung und Propaganda” (Reich Minister of Public Enlightenment and Propaganda). Goebbels wanted to call it the “Ministry of Culture and Public Enlightenment” because that sounder kinder than “propaganda” but it was vetoed by Hitler. With this tool they had control of film, radio, theater, and the press. They would have loved the internet.

This is the 2022 version of Hitler’s 1932 vision. The Nazis are replaced by the Bidenazis.

This makes me wonder what kind of ethereally created powers this “Board” will try to wield and by whose authority. Biden is already demonstrated a dark disrespect for laws and courts. One can only imagine the sweeping power he thinks he can authorize to this Board. Mayorkas has been entirely evasive about this, but he did make some things clear:

He explained that the board would work to tackle disinformation ahead of the November midterms, particularly in Hispanic communities.

He also said that the board would come under the Biden-era Center for Prevention Programs and Partnerships (CP3), meaning it would have no powers to crack down on disinformation and will instead try to combat it by throwing money at what it sees as problems.

The CP3 program provides communities with resources and tools to help prevent individuals from radicalizing to violence. Last year, CP3 awarded about $20 million in grants through its Targeted Violence and Terrorism Prevention Grant Program. It is unclear how much cash will be spent on the Disinformation Board.

Mayorkas noted that the focus of the new board would be to stop the spread of misinformation in minority communities, including election misinformation ahead of the 2022 midterms.

He added that it would focus on the latest trend of misinformation allegedly targeting Spanish-speaking voters. No further details on the exact misinformation being deployed against these communities was shared.

Why target Spanish speaking communities? This is why

Hispanics are abandoning Biden in droves. Here’s why

But perhaps the most disturbing number for Team Biden comes when looking at his stunning fall among Hispanics, a hugely important voting bloc that went to him to the tune of 61 percent.

In the Quinnipiac poll released this week, Biden receives just 26 percent approval. Upon entering office, FiveThirtyEight.com had Biden at 69 percent approval, so we’re talking a 43-percentage point drop in the span of 15 months. And just 12 percent of Hispanics “approve strongly” of Biden’s performance as president, while 54 percent “disapprove strongly” or “disapprove somewhat.”

For Democrats, these are keep-you-up-at-night numbers. Because Latinos are the country’s largest minority voting bloc.

Joe Concha says a number of things are causing this rift

Mayorkas, who is a world class liar, intends to spread his perverted version of conditions in an effort to “save” these people from the truth. Jankowicz will be the enforcer.

I don’t think for a moment that this “Board” will be targeting only Spanish speaking voters. I think we will see Executive Orders giving this Board of Public Enlightenment and Propaganda powers to exert censorial control over Twitter, Facebook and probably more. We will then find ourselves once again in the middle of a Constitutional crisis leading up to the midterm elections.

Here’s another big question- who is to decide what is disinformation? The Bidenazis will. And who are the threats? Conservatives.

It is no coincidence that this Board magically appears as soon as Musk buys Twitter and promises real free speech that is legal. It is exactly that free speech which is sending chills up the spines of progressives, who are ersatz Communists. Neither Biden nor Mayorkas nor Jankowicz cared a whit about the disinformation spread by democrats over the last five years, resulting in the overturning of a Presidential election. But now when right might prevail, it’s different.

bidenazis are essentially doing an end around with regard to the first amendment.

Now some bureaucrats will determine what is or is not misinformation. The ministry is an unconstitutional ploy because they fear the loss of themselves spreading misinformation.

They continue to spread misinformation about Ukraine. Ukraine is losing the war and cannot win yet they tell us otherwise.

Today’s dismal GDP numbers are another opportunity to lis when biden said there was strong growth in the economy.

Musk or 2000 mules? not hard to say both. Techno fog not shadow banned?

My thoughts exactly. Both of those have these totalitarians scared out of their collectivist minds (if they even have minds).

So, the guy that says, under oath, that he has full operational control of a border across which over 2.4 million illegal immigrants crossed in 2021, with this year looking to exceed that, and enough fentanyl to practically kill the entire world has nominated a woman that just shot from the hip that the Hunter laptop was “Russian disinformation”, without knowing a single detail as the Minister of Leftist Propaganda. Yeah, that ought to really be equitable and informational.

The left has NO BUSINESS delving into trying to control disinformation because they promote nothing BUT disinformation. They have yet to admit that their flagship lie of 2016, the “Russian collusion” BIG LIE was, in fact a lie and they all KNEW it was a lie from the git-go. Disinformation is their forte; NO ONE should trust them for one second with our 1st Amendment rights.

NO ONE should trust them for one second with our 1st Amendment rights.

I can’t wait until you get loaded onto the train bound for the reeducation camp. Dig that latrine, comrade! Break those rocks!

I can’t wait until you get loaded onto the train bound for the reeducation camp. Dig that latrine, comrade! Break those rocks!

I’m sure you can’t. It’s the dream of every leftist to be able to silence any and all voices of dissent. It’s the ultimate sign of weakness. What vindictive morons like yourself never realize, though, is that you aren’t being protected; you’re just waiting your turn. I see you don’t dispute the fact that those who seek to police “disinformation” are the nation’s greatest liars, you simply yearn to see innocent people imprisoned.

This guy is getting worse. Notice the dropping of the eyelids. Not all brain neurons functioning.

The Brain Misfires and the Body Shuts Down!
By Dr. Gilbert S. Jaudy, D.C., C.C.S.T

Being a kleptomaniac himself, he doesn’t like to say the word out loud in public.

It's pretty telling that all the people who claimed Trump was 'literally Hitler' are now defending Biden creating a Ministry of Truth.

He’s not wrong, but I avoid using disease-language against anyone. It dehumanizes and helped Hitler kill the Jews, because they were a “disease.”
Xyclon was used on the rats in the factories, in case you want to know where the language, and methods, came from.

If they are going to restrict disinformation, here’s a starter pack.

Media Doing Its Part to Prop Up Biden

Your misogynism is showing.