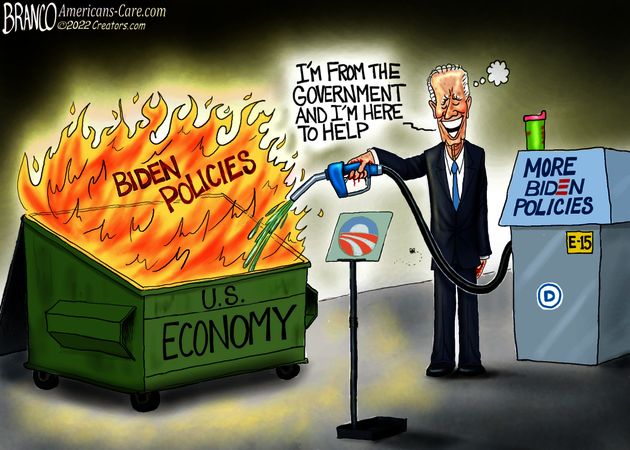 Welcome back to Day 458 of the President “Inflation is everyone’s fault but mine”* occupation! Let’s get to the insanity:

It turns out that my state’s former racist governor was also being targeted for kidnapping by the FBI!

I’d love to see the NY Slimes try a similar stunt with Islam. And we know exactly why they won’t.

4/16 – 20 federal ‘assets’ were embedded at the Capitol on January 6, contradicting media ‘fact checks’

That number seems low. How many know Antifa & BLM terrorists were identified and allowed into the mix?

Nobody ever accused Climastrologists of being smart.

4/18 – This way Joe! Biden gets pulled away from reporters by aid in EASTER BUNNY costume

Yes, you’ve probably already read this story. But The Daily Mail did a great zapruder-like breakdown of this humiliation in pictures. If Biden* weren’t such a sphichter muscle I would actually feel sorry for him.

4/19 – In Biden’s Annual Economic Report, The Word “Gender” Is Used 40 More Times Than The Word “Inflation”

I assumed the headline had to be a joke. It’s not, and Disney seems intent on its self destruction.

4/20 – Former Bush-Cheney Advisor: Jesus Christ ‘Would Be Called A Groomer’ If He ‘Was Alive’ Today

I think it was Ace who observed that with two or three exceptions, everyone from teh Bush admisistration would go on to become a Democrat. Read the post to see which primary this clown just dropped out of.

More of this. But here’s my big question – why is it a Democrat taking the lead on this great idea?

In other words, another day ending in a “Y”. I do like that The Goon Squad is becoming the face of the Democratic party

When two fairytale characters run into each other. pic.twitter.com/L8GBmdbzqf

Oh Jill, I guess when you have Joe for cover, fashion and fit does not matter. If the gloves dont fit, is so 5 minutes ago.
The new revised “Hail to the Chief”

Any idea who nuked CNNs new steaming service from orbit?

Barry at a disinformation summit, adding his scandal free expertise on the subject?

The WH press secretary has found a new job with the hwy dept.

That would be perfect for Ginger Goebbels

I guess people should stop inciting the FBI to violence, huh?

I’m old enough to remember when the left attacked Trump because he “lied” when he told everyone that they weren’t going to die from COVID. Now, the left lies to protect their own asses and this is somehow in the “national interest”. I wonder how much influence the government had in this? What could go wrong with having the people that pushed “Russian collusion” and suppressed “CCP influence peddling” control content?

Making such a suggestion about Islam would get you beheaded. In Sweden, some guy threatening to burn a Koran caused massive riots and fires. But, it’s predictable. Just don’t turn your back on all those white supremacists!

4/16 – 20 federal ‘assets’ were embedded at the Capitol on January 6, contradicting media ‘fact checks’

Maybe what fact checked “false” was that there were only 20.

4/18 – This way Joe! Biden gets pulled away from reporters by aid in EASTER BUNNY costume

Shades of “Harvey”. No telling what Santa Claus could get him to do.

4/19 – In Biden’s Annual Economic Report, The Word “Gender” Is Used 40 More Times Than The Word “Inflation”

One thing you can count on with this regime, they will find the diametrically WRONG way to address every issue.

4/20 – Former Bush-Cheney Advisor: Jesus Christ ‘Would Be Called A Groomer’ If He ‘Was Alive’ Today

I’m pretty sure Jesus would be turning over the sex-change tables since scriptures discourage even tattoos and piercings.

I don’t think much of anyone that voted for either of the politically motivated Trump impeachments, but how difficult is it to own those two sphincters?

And, of course, this is what endears her to the left.

Making such a suggestion about Islam would get you beheaded. In Sweden, some guy threatening to burn a Koran caused massive riots and fires. But, it’s predictable. Just don’t turn your back on all those white supremacists!
The simple answer is:
“Because Christians don’t rip people’s arms out of their sockets when you mock their faith.”
“I see your point, sir. I suggest a new strategy – let the Muslim win.”