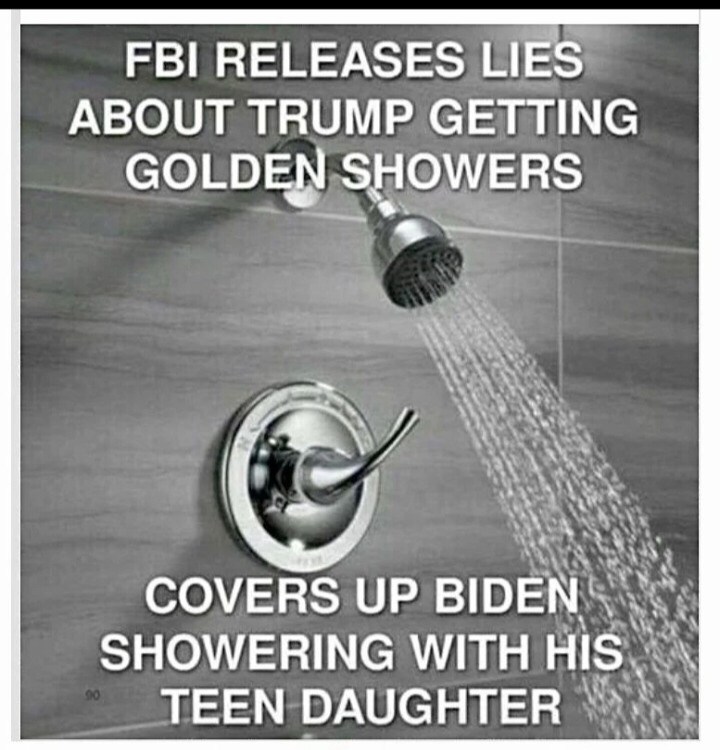 I saw the above picture elsewhere and it got me thinking.

The FSB is the secret police organization in Russia, whose job it is to protect Vladimir Putin and carry out various acts of intimidation and skullduggery. In the US, the FBI is an organization secretly dedicated to protecting democrat Presidents and undermining Republican Presidents.

The FBI lied to the FISA Court 17 times to spy on Trump and his staff.

The FBI spied on the Trump campaign in 2016 and continued it into his Presidency.

When the existence of the Hunter Biden laptop was revealed the FBI first refused to accept copies of the hard drive, because they’d already seized the hard drive in 2019 and sat on it.

When then-DNI John Ratcliffe said the Hunter Biden laptop was not Russian disinformation the FBI had “nothing to add.”

The FBI raided Rudi Giuliani’s apartment in an effort to intimidate him. Contrast Giuliani’s treatment to the overlooking of Joe Biden’s extortion of Ukraine, demanding that the prosecutor investigating Hunter Biden be fired before US aid would be forthcoming.

Then the FBI lost the Hunter Biden laptop.

There were explicit crimes on that laptop, including Hunter Biden admitting a relationship with a 14 year old girl.

The FBI knew full well that there were crimes and depravity on the Hunter Biden laptop.  The FBI knew that there was evidence that Biden and his son were co-mingled in selling influence and access to the Vice Presidency.

When Ashley Biden’s diary was found and made public, the FBI raided the apartment of James O’Keefe, who had already refused to make it public. The Bureau concocted a story that the diary was “stolen” when it was not. In it, Ashley Biden wrote that her father Joe had taken showers with her that were “not appropriate” and described it this way –

I have long thought Joe Biden shares the same attraction to underage girls that his son Hunter enjoys. You can read about it here. Watch him pinch the nipple of an 8-year-old girl.

Hunter Biden lied to obtain a gun permit. His wife Hallie disposed of it illegally.

Hallie told the store manager, who passed the information along to Delaware police. According to the police report, which was obtained by Politico, the incident caused heightened concerns because the store was across the street from a high school, and officers worried the gun could be used in a crime. The FBI, which was investigating Hunter’s taxes at the time, also reportedly responded to the incident.

At the same time that Delaware police were questioning Hallie and Hunter, two Secret Service agents arrived at StarQuest Shooters & Survival Supply, the gun shop where Hunter bought the revolver, two people familiar with the incident said. The agents asked owner Ron Palmieri to turn over the Firearms Transaction Record Hunter filled out in order to purchase the gun.

Palmieri refused, however, reportedly because he suspected that the agents wanted to hide Hunter’s ownership of the gun. The ownership records fall under the purview of the Bureau of Alcohol, Tobacco, and Firearms, and Palmieri handed the records to the ATF a day after the incident. Palmieri declined to comment to Politico.

The news comes after Joe Biden’s presidential campaign dealt with questions regarding a number of Hunter’s foreign business dealings. Hunter admitted in December 2020 that the FBI and IRS were investigating his “tax affairs,” referencing the probe open at the time of the alleged incident involving his revolver.

They buried it all. They won’t even bother to ask who “the big guy” is when the big guy is getting 10%.

The FBI did everything it could to undermine Donald Trump- going even so far as to conspire with the Clinton campaign to smear Trump. Conversely, it does absolutely everything it can to prevent the truth about Joe and Hunter Biden from being known. The FBI has become a de facto arm of the democrat party. If anything should be defunded, it’s the FBI.