May 23: Mark this day. It will be the day that marked the beginning of the end of the United States of America 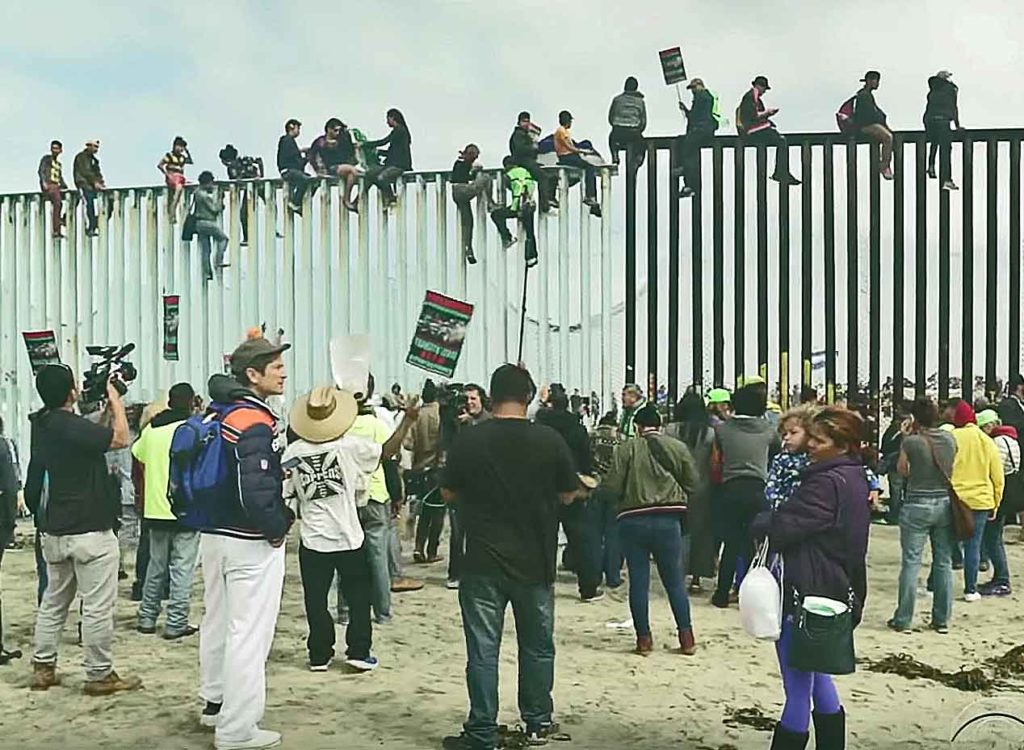 Sort of looks like something from the movie “World War Z”, doesn’t it?  May 23. Mark it down. It is the day Joe Biden officially erases the Southern border of the United States of America.

On May 23 Joe Biden officially lifts Title 42. Title 42 is one of the few remaining policies in place that are preventing a complete invasion of this country by illegal aliens. As a consequence, when it is ended as many as 18,000 illegals per day are expected to flood across the border, adding as many as 6 million more illegal alien tax burdens to the 2 million the Biden regime let in last year, the third highest in 97 years.

This year, based on the data we’re already seeing the first six months, they’re going to have over two million apprehensions. Again, another historic record, but when they end Title 42, they’re going to blow last year’s numbers out of the water. God help us, because it’s going to be an uncontrollable surge on the border and let me make this clear how important this is. We have lost operational control of our southern border. We no longer control it. The criminal cartels control it. I’ve talked to several chief patrol agents who told me they have lost operational control of the border. They cannot control the flow coming in.

Not only that, but that bastard Alejandro Mayorkas, the Director of Homeland Invasion, wants this flood and wants to make sure the illegals stay any way possible:

Border chief Alejandro Mayorkas is directing that economic migrants get every opportunity to stay once the Title 42 barrier is removed — regardless of the huge damage he inflicts on ordinary Americans.

To maximize benefits for migrants, Mayorkas minimizes the detention and deportation of migrants — even though federal law generally denies the entry of foreign workers and economic migrants into Americans’ homeland. His plan sketches ways for border officials to squeeze many migrants through small doorways in the nation’s border.

He even seeks a “backlog amnesty” for nearly 2 million illegals.  Biden and Mayorkas have again taken to flying these illegals around the country and dump them into unsuspecting towns who have to bear the financial burden of supporting them and absorbing the crimes they commit. You bet your backside that such a move would be closely followed by accelerated citizenship and then voting in Federal elections. Since almost none of them can speak English you can bet the farm they’ll all vote democrat. That program will be funded by Zuckerbucks, as happened in Wisconsin.

The benefits of this illegal invasion are already appearing.

An illegal alien is accused of killing a legal immigrant mother of two children in a drunken hit-and-run crash in the sanctuary jurisdiction of Wake County, North Carolina.

Aldair Leon-Olluas, an illegal alien from Mexico, was arrested and charged this week in the death of 63-year-old Erin Simanskis, a legal immigrant from Canada and naturalized American citizen who worked at WRAL News.

An illegal alien is charged with brutally murdering a couple who were riding bikes back to their home in Daytona Beach, Florida. Jean Robert Macean, a 32-year-old illegal alien, was arrested and charged late last week for the murder of a husband and wife — 55-year-old Brenda Aultman and 48-year-old Terry Aultman.

In January an illegal killed a cop:

The illegal immigrant accused of killing Harris County Constable Charles Galloway with a rifle on Sunday was arrested by Mexican police and U.S. Marshals after he was found hiding in the border town of Ciudad Acuña.

The New York Post reported that Oscar Rosales, 51, has been a fugitive in Texas for 25 years and is wanted for murder in El Salvador. Mexican police handed Rosales over to the United States after being caught. Rosales has been charged with capital murder for allegedly shooting Galloway through the windshield of his squad car during a Houston traffic stop early Sunday morning.

It’s estimated that every year 2000 Americans are killed by illegals. You can expect that number to grow proportionately. Mayorkas should be forced at gunpoint to face on his knees the families of those who have been and will be killed by his policies.

Did I mention child rape?

Mayorkas, however, is protecting this country from Caucasians who seek asylum.

This obscene Biden/Mayorkas policies have some powerful ramifications. The flood of illegals means a flood of hardened criminals:

When it comes to sexual offenses, including rape, there were 156 known convictions discovered among illegal border crossers during Trump’s last year in office.

The number more than tripled to 488 during Biden’s first year.

There are also dozens of stone-cold killers among the illegal border crossers: 60 convicted of homicide or manslaughter last year alone, shattering what was the recent high of 8 during Obama’s final year, and a 1000 percent spike over Trump’s last year in office.

Up more than 500 percent last year: the number of convictions for Driving Under the Influence (DUI); assault, battery and domestic violence; illegal drug possession and trafficking; and burglary, robbery, larceny, theft, and fraud.

The US is a target rich environment for illegal alien criminals and Biden is helping them- especially the adult males who are released en masse.

This is before the drugs. Drug overdose deaths now top 100,000 over 12 months and it will accelerate because this regime simply does not give a rat’s ass. Fentanyl is the leading cause of deaths for those 18-45. democrats clearly want this to continue unabated. Despite their protests to the contrary, democrats seem pleased to allow the surge in fentanyl deaths in black communities.

In a reversal of historical trends, Black drug users now overdose at a higher rate than whites who die from drugs in a majority of U.S. states, according to the CDC. In 2020, the most recent year for which numbers are available from the CDC, overdose deaths among African Americans rose nearly 55 percent from the year prior, while for whites the rate of increase was 31 percent.

No coherent or sober reason has ever been offered for wiping away our border and national sovereignty and security. All I can figure is that Mayorkas and the Biden crime family are scoring big on the fentanyl flowing across the border.

And what is to become of the national fabric? The majority of illegal aliens never become literate in English. Invading illegals come from at least 50 countries. They have no sense of nationalism or loyalty. It’s all about making their lives better, but not giving anything back. Their actions show an innate disrespect of our borders and laws.

Illegal aliens provide cheap labor for the wealthy but depress wages for minorities and the poor. They monopolize ER’s and flood schools at the expense of the communities. Every illegal is a tax increase on Americans.

How does this mass invasion in any way make this country better? What does open borders do for us? The drugs? The crime? The economic burden? I once opined that Mayorkas wants the US to become a latino country. What he really wants is Caucasians made irrelevant. May 23 is the beginning of that policy and the end of the country as you know it today.

Joe Biden swore to protect the Constitution and this country. He is a disgrace and will be remembered as a putrid failure.

All prior planned and intentional. Bohica ~ it’ll continue, and you will like it.

Without the border wall, Trump’s rhetoric in 2016 stemmed the flood of illegal immigrants, at least until Democrats could challenge every initiative to secure the border and could go south of the border to organize massive caravans of invaders to challenge our border. Even then, Trump closed the border off with troops while the wall was (finally) being built. Trump protected the country and citizens.

Idiot Biden’s rhetoric sent forth the message that any and all that came would be allowed in and provided subsidies to thrive here. Hell, they even hand out smart phones and free transportation. Now, the final slowing feature of illegal immigration is to be removed, even as the Democrats pretend to be concerned with a COVID surge. Idiot Biden and Democrats do not give a SHIT about the safety of citizens, the burden on taxpayers or national security.

I hope Abbot can transport tens of thousands of illegal immigrants right to the White House gates and Capital steps. The time of Democrats causing irreparable damage to the nation and citizens without ever seeing the harsh effects MUST come to an end.

recall that liberals are socialist; therefore, America will become a socialist state as the masses follow the alleged liberal thinking. Recall that Russia does not tolerate gays.

Latest CBS Poll Reflects No Hope for Anyone, Including Joe Biden and Democrats
CBS has released their latest YouGov Poll [DATA HERE], again showing the top priorities of the American people are not even on the radar of the American government. The DC beltway disconnect is stark. 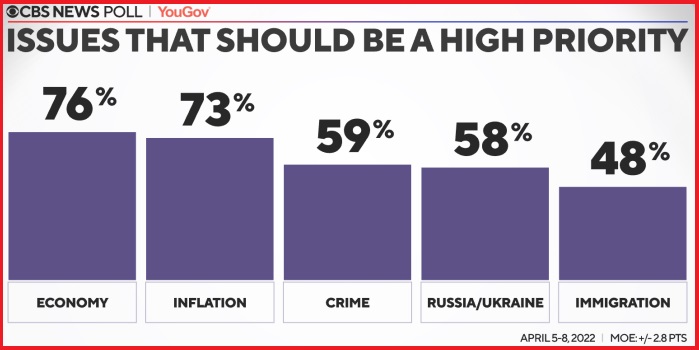 Interestingly, the recent survey of Pennsylvania voters done by Reuters, turned up this almost identical priority list, only Rusia/Ukraine did not even appear in the top five. The economy, inflation, gas prices, crime and immigration are the top five issues across the board, in almost every poll.
Russia/Ukraine is a non-existent issue. Yet, that is the actionable priority -with questionable importance for U.S. security interests- for a totally out of touch government and media to focus on. Sending $14 billion to help Ukraine’s border fight, while our borders are crushed with illegal aliens, is a sharp stick in the eye for every American.
Unfortunately, our opinion doesn’t matter, and frustratingly, the people using Biden as a tool to achieve their goals do not have any concern whatsoever about political fallout. Biden is a disposable tool for a program of rapid single-term advancement of the democrat-communist agenda.

How The Biden Administration Is Aiding And Abetting The Biggest Border Fraud In U.S. History

Democrats hate Americans. They no longer buy their lies disguising their rush to socialism. So, they need NEW Americans that don’t understand English that well, are naive, uneducated and come from circumstances even worse than what Democrats have in store. A close eye will be required on polling places i 2022, watching for illegal immigrants registered to vote.

A NEW BIDEN RECORD: 221,303 Illegal Alien Border Apprehensions in March – And It’s Only Going to Get Worse

It seems there are millions of illegals that have come into America and we are paying for their health care, homes, food, schooling while American citizens are suffering from inflation and working hard to keep up but it is never enough under biden/obama regime. and now, we face every day wondering who will be raped, or murdered by these illegals and who will be held accountable.

I guess inventing lies to defend THIS stupid shit is beyond their capabilities.