The war Biden and democrats, needed, wanted, asked for and got 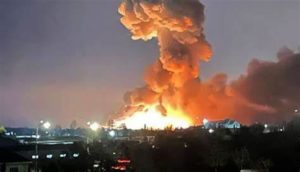 democrats are loving the war in Ukraine but no one loves it more than Joe Biden. Biden does stand to benefit from the war in Ukraine, something made clear by three liberals. Juan Williams gleefully suggested that Biden “may be Comeback Kid of midterms.” Chris Cilliza asked “Is this the beginning of a Joe Biden comeback? The fakest of fake Republicans, Jennifer Rubin, wrote “President Biden just had one of his better weeks.”

An evil man once said, “You never want a serious crisis to go to waste.” That’s especially true if the crisis was your creation and make no mistake, Joe Biden created this crisis. Biden greenlighted Putin’s invasion of Ukraine. The only question is, did he collude with Putin?

The signs were all there. Weakness invites conflict and Biden has done nothing but project weakness. He’s lifted sanctions on our adversaries, freed up money for terrorism, opened the door for China to again pilfer our intellectual property and made the US more and even more dependent on foreign sources of energy.

He screwed the pooch in Afghanistan. Since he declared that he “planned for every contingency” one is forced to conclude that his clusterf**k was part of that plan, a signal to Putin perhaps. Then Biden said he wouldn’t respond to Russia if an invasion of Ukraine was a “minor incursion.” The war in Ukraine did begin as a minor incursion. Only recently after Putin began committing war crimes did Biden sanction Russia’s oil and gas but we’ll still be buying it from Putin’s allies. By the way, the State Department says that the Russian sanctions should not affect the Iran deal.

People don’t normally take pleasure in wars, but democrats do, especially if it confers a political benefit and an opening.

Thus, we come to the second half of this scam.

As Biden sanctions Russia’s oil, Venezuela and Iran are most likely going to jack up the price of their oil in order to visit the greatest economic harm on Americans. Biden has stated that he will not open the Keystone XL pipeline nor take any other measures to increase domestic production. So what’s the plan? Cue the Green New Deal.

Cutting off sources of oil are causing and will cause gasoline prices to skyrocket. To combat that, Pete Buttigieg says “rural to suburban to urban communities can all benefit from the gas savings of driving an EV.”

Did little Petey say “suburban”? Like farmers? Ever see an electric combine? Electric tractor? Where in the plains of Nebraska is there infrastructure to charge them?

But hey, Stephen Colbert is willing to pay $15 a gallon for gas because he drives a Tesla. A $150,000 Tesla. Colbert is worth $45 million, so the cost of pretty much everything is irrelevant. He is a pompous a**hole. Don’t be like Colbert.

BTW, there is a lot of oil in an electric vehicle and here’s another mind blower:

The energy equivalent of 100 barrels of oil is used in the processes to fabricate a single battery that can store the equivalent of one barrel of oil.

democrats would have us give up our oil-fired furnaces for non-dependable wind turbines (which need petroleum products to function and have non-recyclable blades) and solar panels (made in China). We’ll be green- and a poor third world nation. Bear in mind that that if US emissions went to zero tomorrow it would make very little difference in world climate, but it would effectively destroy the middle class in this country.

What this really means is that the Green New Deal really is about green, as in dollars. You can bet that Biden enterprises will be cashing in, along with the Kerry and Pelosi families. Yes, democrats may be badmouthing the war Ukraine but inside

And not about to let a serious crisis go to waste.

Putin has offered terms to end the conflict and Zelensky is giving serious consideration. But you would never know that watching or reading anything from the democrat media. When the SOS blinken tried to initiate a no-fly zone with Poland being the principal participant, Poland called their bluff and said fine, we will send our planes to Germany, and you can fly them.

Ha-Ha-Ha… Oh, the Biden administration is not happy with Poland. Not happy at all.

Earlier this afternoon, Poland called Secretary of State Anthony Blinken’s bluff, over the U.S. claims that Poland was going to send fighter jets into Ukraine. This followed Sunday’s announcement where Poland said the U.S. State Dept was lying.

Earlier today, Poland said they would give the U.S. the planes if Blinken and Biden wanted to start World War III, but Poland wasn’t going to help the U.S. create a war with Russia. This put the U.S. in a ‘put up or shut up’ position. Well, Blinken and Biden just folded, per the Pentagon:

The Left used to opine that Russia had dirt on president Trump.
Truth is Russia does have dirt on Hunter, Jim and joe Biden.
We are watching joe pay off Russia with our tax dollars.
Now that stopping this is veto-proof joe backs off.
But he’s still interested in keeping all that dirt about himself, his brother Jim and son Hunter under wraps.
So, instead of enriching Russia he will impoverish America.
It comes out to the same thing.

How about releasing transcripts of every one of idiot Biden’s calls with Putin and Zelensky to intel committees? Might as well include every call to Xi as well. What was actually discussed needs to be known as idiot Biden is known to be corrupt, a liar and someone that will sell out the nation for his own profit. BREAKING: Documents Reveal US Department of Defense Was Funding Ukrainian Biolabs — Russia Releases List of Biological Agents Tested in US BioLabs in Ukraine, Including Salmonella, E. Coli, Anthrax and The Plague

Maybe why Putin invaded. Equivalent of middles in Cuba in the 60’s?