If you were Putin would you respect and fear a President who focuses on this? 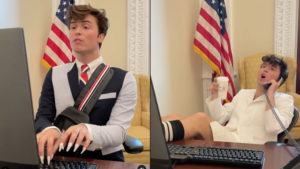 62% of Americans believe that Putin would not have invaded Ukraine if Donald Trump was President.

The view was held by an overwhelming 85% of Republicans, but also 38% of Democrats. A further 59% of voters said Putin had decided to invade because Putin sensed weakness on the part of President Biden, while just 41% said that view had not played a role in Putin’s decision.

Count me among them. Joe Biden had done nothing but weaken the United States. He botched Afghanistan in one massive clusterf**k.  Now he’s botched Ukraine.  Biden gave China intelligence on Russia vis-a-vis Ukraine and China then handed it to Russia.

Unnamed U.S. officials told the Times that over the past three months, senior administration officials arranged urgent meetings with Beijing during which they shared intelligence showing Russia’s troop build-up on the Ukraine border in hopes that China would step in and tell Russia not to invade.

Each time, the officials said the Chinese rebuffed the Americans, playing coy about Russia’s intentions — and at least one time, the Chinese turned around to hand over the intelligence to Moscow.

Biden is completely unserious and unprepared. What has Biden been forcing the military to focus on?

Did you know we have a secretary of defense for human capital and diversity, equity and inclusion???

U.S. Military Instructed To Be ‘Sensitive’ Of Pronoun Use, Warned Against Gender ‘Assumptions’ 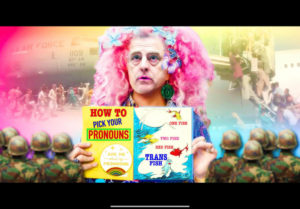 A new Department of Defense handbook on transgender persons released Friday instructs service members to be “sensitive” of each other’s preferred pronouns and warns against making “assumptions” about another person’s gender.

Biden is pruning out those who question infusing the military with CRT training.

Just Now: State Department spokesperson pledges US will continue to work with Russia in areas of key interest (presumably the Iran nuclear deal and Kerry’s climate change comments, among them). Then says Russia is a pariah. Stunning.

Seems no one asked about the Russian tank emissions and the chemicals burned from Russians blowing up Ukrainian assets. Speaking of assets, wouldn’t that $65 billion in weaponry left in Afghanistan be helpful to Ukraine right about now?

The Biden regime is infected with woke. Woke is its religion. Woke is its handbook. Woke is now the pathway to promotion in the military. The singular focus on woke is costing America bigly.

Below is a measure of how serious the Biden White House was about governing, leading the free world and protecting Americans.

If you were Putin, would you think Biden was a serious, competent President to be feared? Would you be afraid of a President who spends resources on this? Instead of Build Back Better, we get Biden Botches Bigger. 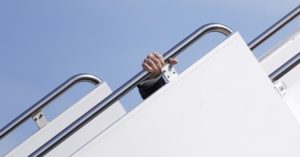 That’s why Biden is the miserable failure he is. One wonders whether we can even survive as a nation for three more years.

Biden gave China intelligence on Russia vis-a-vis Ukraine and China then handed it to Russia.

The left wanted to impeach Trump for warning Russia about a planned terrorist attack on an airliner that would have killed innocent people. I’ve yet to hear their demands to impeach idiot Biden.

Speaking of assets, wouldn’t that $65 billion in weaponry left in Afghanistan be helpful to Ukraine right about now?

Below is a measure of how serious the Biden White House was about governing, leading the free world and protecting Americans.

I wonder if idiot Biden sidles up behind that thing and sniffs his hair? Maybe dry-humps his butt or makes him shower with him. No telling. Putin sees that and thinks, “Ukraine is mine.”

Being any kind of “LGBT” is a needless indulgence. You’re not born that way, and your choices are your own.

The need to destroy men and make them into beta-cucks, or worse, gay men, is the usual satanic ploy. It’s one of the main reasons this country is imploding. Someone’s kinks do not make them a new “class” of person. How selfish these people are.

The good news is that Kooper won’t breed.