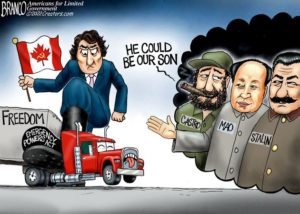 Welcome to Day 402 of the Harris* occupation! You know that a number of Democrats at the state and national levels are looking at what Justin Castreau is doing up north and are weeping with envy. Lots to post this week, so let’s get to it!

And then Adams blames his problems on… racism. Sorry New York City, but replacing malevolent with stupid is not an updgrade.

Pay attention – you know that our Radical Left is studying these overseas projects and taking notes.

Normally I don’t give a click to the Leftist rag known as The Nation, but this article is too damned funny to not share. Quick recap: “Our policies are awesome, but we agree that the results are hot garbage. So we need to double down!”

For all that American “journalists” bray about their PTSD from the Trump presidency, those cowards won’t utter a peep about real violence against one of their own (see: Andy Ngo)

This is the same disgusting issue with scholastic standards: When our policies fail, we lower expectations. Who gives a damn about the kids, anyway?

2/19 – Ph.D. Candidate at UPenn Says Freedom is a ‘Key Component of White Supremacy’

Um, if we take this idea to its logical conclusion, does that mean that non-white people are all tyrants?

I don’t care either way about forcing kids to wear bike helmets, but if Leftist stupidity means more freedom I can live with it.

With all due respect Mr. Gates, stigmatizing those of us who prefer to roll without pants shall not help your cause.

If right now you’re saying, “This looks like one of Brother Bob’s links that make the cut for no other reason than having a cool title” you would be correct.

And members of the profession formerly known as journalism wonder why we Normals distrust and can’t stand them.

I love stories like this. Yes, please continue to demonize parents, Democrats – this is a winning issue for you!

Masking 2-year-olds and handing out needles to addicts is the new public health.

ICYMI – I asked the question –  Is Scholastic Press Creating a Generation of Illiterate White Boys?

No TWIRL next week, as the Bob Family takes some time off for some much needed R&R. But I will have a fun post for you next weekend, where I’ll be speculating as to what happened to Howard Stern. Have a great weekend and I’ll see you back here in two weeks!

I guess they used the wrong bible.

Damned non-leftists, using the truth and reality to point out our flaws and failures! Perhaps the success at “harvesting fears” is due to being able to SHOW what the source of the fear is. Do you think there is hope for a treatment for such derangement?

The actions of Canadian police was really surprising and horrific. They appeared to really enjoy beating peaceful protesters.

I guess they think this hides the effects of their failed policies. But, you know, follow the science, don’t politicize the virus, yadda, yadda, yadda.

2/19 – Ph.D. Candidate at UPenn Says Freedom is a ‘Key Component of White Supremacy’

Um… wasn’t “lack of freedom” a major component of slavery? When slaves gained their freedom, did they become white supremacists? Little did those slaves know that when they sought freedom, they became racists.

So, the problem with bike helmet laws is that only people without helmets get fined? Maybe we should drop murder and robbery laws (hell, we almost have anyway) because they are committed disproportionately by blacks and, thus, blacks are disproportionately punished.

Yep, in both cases, they cover up something many of us just don’t want to see. Joy and Whoopie come to mind… on both counts.

I guess Canada’s score would be a bit lower if the study had been done a little later.

What’s the matter, isn’t all the obvious evidence of climate change and all those climate change predictions coming frighteningly true enough to convince the public?

Yeah, I remember back in the good old days in my family where we held elections to determine who ran the household. Apparently, children have rights… except the one that allows them to decide what gets strapped to their faces. Love how parents “ want to create new rights on top of the privileges parents already enjoy,” although they don’t, apparently, have the right to raise their own children in their own way.

“Presidents had little to do with making America independent of foreign oil imports.” That’s kind of contradicted in the same article. Obama and idiot Biden both restricted drilling wherever and however they could. This maintained our dependency. Trump followed the “drill, baby, drill” doctrine and, thus, made us energy independent. I wonder what would happen to Anwar if rare earth minerals was discovered there?

The actions of Canadian police was really surprising and horrific. They appeared to really enjoy beating peaceful protesters.

There was some leaked recordings – they did.

Get some perspective. Trudeau is not a tyrant. Here’s what ACTUAL tyranny looks like.

It would appear you did not find intelligent discussion elsewhere hence your return.

Trump had Putin under control, but Putin decided to invade Ukraine as soon as weakling Biden entered the White House.
Fox News host Tucker Carlson this week said the Russia-Ukraine conflict is not our fight as Americans.

At this point biden wants Zelensky killed, but he wants Russia to do it.
Despite all the rhetoric, we’re basically doing nothing to help Ukraine.

GOP Leaders Call on Biden to Lift His Restrictions on U.S. Oil and Gas So America Can Be Energy Independent Again . . . Like It Was Under President Trump

Greggie poo this is what tyranny looks like.
The Mohawk elder is on her mobility scooter, the guy in the brown coat is attempting to shield her.
After being trampled the Mohawk elder is later dragged away by her coat by the police, she had to be hospitalized for days

The police story was a bike was thrown at the horses legs in attempts to injure it. She is now moving with her family to Florida.
The emergency act facilitated that.

While horrible, the video you posted is not completely what it appears to be.
Of course, if you think that none of these things that Castreau authorized are tyranny, it says as much about you as it does him:

Must See: Canadian Woman Trampled by Agents of the State on Horseback in Ottawa has One Message to the World (Video)

What you posted was what war looks like, and it’s on Biden’s shoulders that that happened.

Biden could have prevented this. Putin wanted to negotiate prior. Biden and Nato said no.

Your clip is what actual war looks like, when the most powerful nation in the world lets a weak puppet get installed and Putin can act as he likes, without consequences.

The “sanctions” will do nothing. 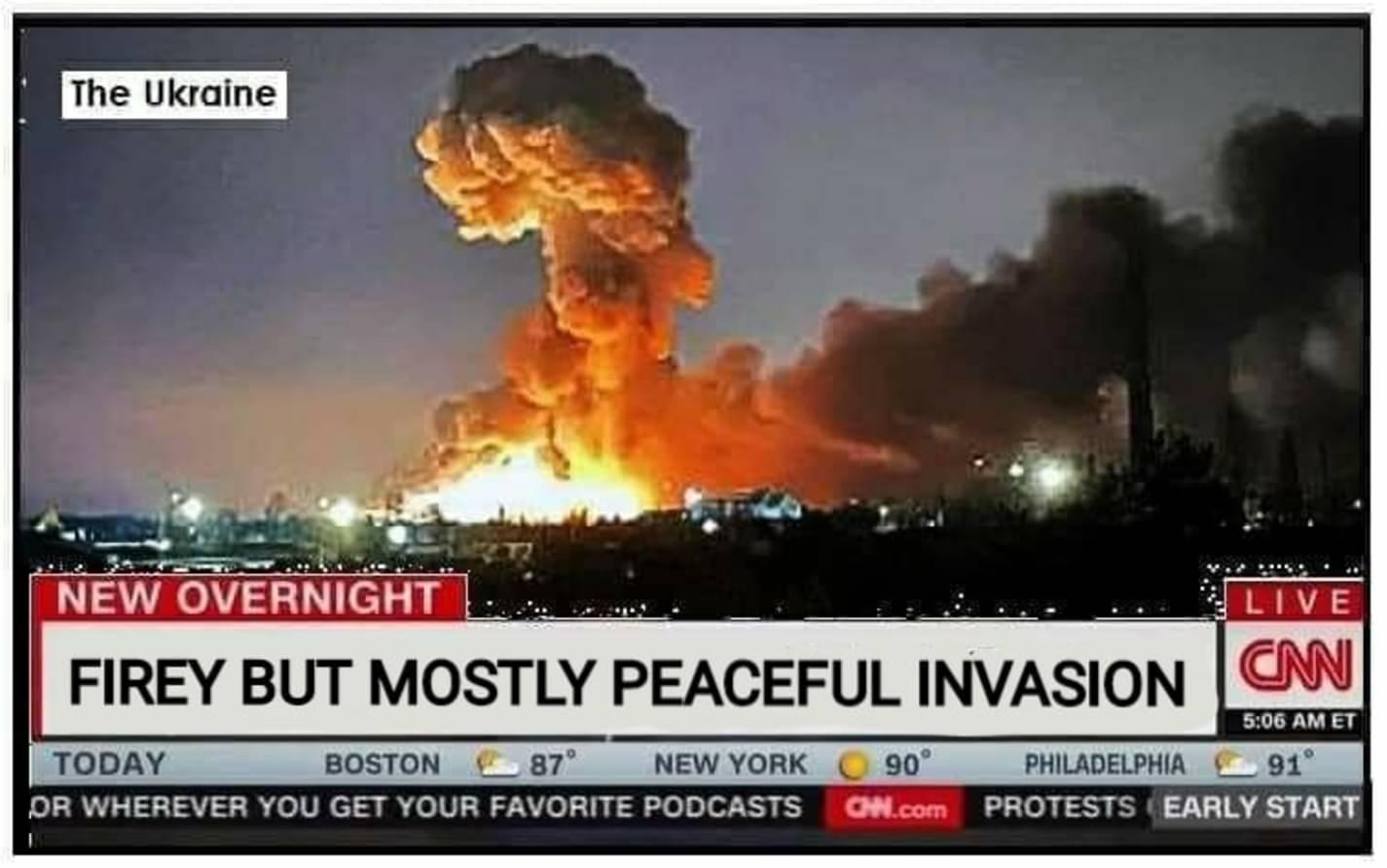 Putin’s Most Potent Weapon? – Joe Biden
Over 40% of the Russian government’s budget is derived from oil and natural gas revenues.
Without that money, Putin does not have an army. Putin does not invade anything. Russia is lucky if it can put gas in its tanks.
A rational American President – who actually wanted to deter Russian aggression and enhance American national security – would exploit this weakness to the fullest.  He would do everything possible to ramp up American fossil fuel production, make Western Europe independent of Russian energy exports and leave Putin greatly diminished and powerless in the middle of Eurasia.
That’s what a President who was working on ourbehalf would do.  Joe Biden is not that guy.

And, now with Russian troops knocking on the door of Kyiv and gas prices in this country already skyrocketing, Biden is doubling down on his grotesque, failed policies. Only days ago, Biden intensified his efforts to cripple American fossil fuel production, pausing new leases and permits for oil and gas drilling on federal land.
At the same time, Biden has explicitly refused to sanction Russian energy exports. While Joe is fine with killing jobs here at home and driving up our energy prices, he seems fixated on guaranteeing that Vlad can continue to bring home the cash he needs to bombard Kyiv, kill civilians and push his agenda of reconstituting the old Soviet Union.

In Ukraine, the Russians are employing all sorts of weapons from tanks to rockets to fighter jets. Putin’s most powerful weapon is none of those.  It is the man in the White House who is working overtime to crush the American oil and gas industry and enrich the Russian war machine.