Joe knew. Jake made sure of it 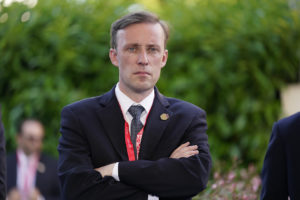 It’s said that you take flak when you’re over target.

It’s all hands on deck for democrats as John Durham continues his pursuit of the truth about Hillary Clinton paying operatives to hack Trump servers in the Trump Tower and in the White House itself. The NY Times is manning one of the guns, once again trying to push the BS Russian collusion allegation.  Joe Scarborough is panicking, saying Fox News is lying about the Clinton spying. democrats, who know better than anyone how to concoct and spread a false narrative, are once again complaining that the Durham investigation is politically motivated.

Here’s one more thing for them to whine about. Joe Biden knew. It came up yesterday in a White House briefing:

The White House on Monday refused to be drawn into the growing controversy over claims that Hillary Clinton‘s allies tried to smear Donald Trump, and whether internet data collection amounted to spying.

Three times Joe Biden‘s principal deputy press secretary was asked whether the president had any concerns about campaigns hacking into opponents’ computer systems to gather dirt.

And three times during the White House daily briefing Karine Jean-Pierre referred all questions to the Department of Justice.

Of course she did. Biden knew.

Joe Biden was present in the infamous January 5 meeting in the Oval Office when the trap for Trump was set. As it so typical of democrats, Rice’s constant harping on “by the book” means it was anything but by the book. It took the one honest man in the obama White House- Admiral Mike Rogers– to warn Trump that he was being spied upon. Trump then moved his campaign out of Trump Towers and to New Jersey. Little did he expect that Hillary Clinton would be so malevolent as to hire a cyber firm to hack into the servers of the White House.

But there is a nexus between Hillary Clinton and Joe Biden- Jake Sullivan.

Sullivan worked in the Obama administration as Deputy Assistant to the President and the vice president’s National Security Advisor, when Biden was U.S. Vice President. He also served as the Director of Policy Planning at the Department of State.

The arrogant pasty-faced little Ivy League boy inserted himself into a big-time game- falsely undermining the President of the United States. Sullivan was a senior policy advisor to Hillary Clinton’s campaign, and he played a direct and significant role in the Russian Alfa Bank hoax.

It was disclosed that Sullivan was passing emails with Marc Elias just before Sussman gave the FBI the phony assertions about Trump’s alleged involvement with Alfa Bank and the Russians.

One of those campaign agents was Sullivan, according to emails that special counsel John Durham obtained. On Sept. 15, 2016 — just four days before Sussmann handed off the materials to the FBI — Marc Elias, Sussmann’s law partner and fellow Democratic Party operative, “exchanged emails with the Clinton campaign’s foreign policy adviser concerning the Russian bank allegations,” as well as with other top campaign officials, the indictment states.

Sullivan then went on CNN to spread the lies

Unsurprisingly, Sullivan has testified to ignorance of everything but that might not work out for him in court.

Sullivan also testified he didn’t know that Perkins Coie, the law firm where Elias and Sussmann were partners, was working for the Clinton campaign until October 2017, when it was reported in the media as part of stories revealing the campaign’s contract with Fusion, which also produced the so-called Steele dossier.

That is incongruous with Durham’s finding that Sullivan and Marc Elias (who worked at the same firm Perkins Coie) exchanged emails about the Alfa Bank allegations just before Sussman went to the FBI in September 2016.

Sullivan knew. He had been a good boy in the charade. The next thing you know, Sullivan is named National Security Advisor- to Joe Biden. Sullivan has been pushing war with Russia for weeks now. He is completely untrustworthy. He may need that war to distract everyone from his direct involvement in the Russian hoax conspiracy. He may wind up being flipping on Biden as these ass wipes tend to do.

The irony is that Biden is going use his dementia forgetfulness as a defense.