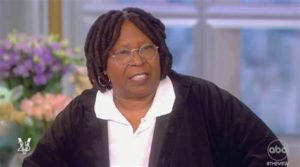 As you know, Whoopi Goldberg was suspended from “The View” for two weeks for making a remark about the Holocaust. She asserted that the Holocaust was not about race, but rather a simple matter of man’s inhumanity to man. She, along with the acerbic lefties on The View, sees herself as more intelligent than everyone in the world:

When Whoopi Goldberg, the intellectual genius and authority on all aspects of the world, said that the Holocaust was not about race, she proved that not only is she a comedian, but a joke too.

When the backlash from her remarks erupted, she ran for cover under Stephen Colbert’s skirt and sought forgiveness. Well, she didn’t exactly ask for forgiveness, but she wanted you to accept her definitions of all things race and Judaism. She wasn’t wrong- you misunderstood her.

“It upset a lot of people which was never, ever, ever, ever my intention… I thought we were having a discussion,” Goldberg told Stephen Colbert. “I think of race as being something that I can see… “You couldn’t tell who was Jewish. They had to delve deeply to figure it out… My point is, they had to do the work.”

She also told Colbert, “I don’t want to fake apologize…I’m very upset that people misunderstood what I was saying.”

Frequently wrong, but never in doubt. You see, things are what they in her eyes and no one else’s. But her being offensive did not begin with these remarks. Moreover, she’s full of merde. In 1993 she submitted a recipe to a celebrity cookbook for “Jewish American princess fried chicken.”

Whoopi’s recipe reads: ‘Send chauffeur to your favorite butcher shop for the chicken (save the brown paper bag). Have your cook 1) Melt equal parts oil and butter 3/4 deep in skillet over moderate heat.

‘Then you tightly close top of bag (watch your nails) and shake 10 times.

‘Hand bag to Cook, go dress for dinner. While you dress, have Cook preheat oven to 350 degrees and brown chicken slowly in skillet. When evenly browned, have Cook place chicken in dish in oven. Have Cook prepare rest of meal while you touch up your makeup.

‘In about half an hour, voila! Dinner is served! You must be exhausted.’

It wasn’t received well by the ADL.

Ever wonder where the name Whoopi came from? It derives from her propensity for flatulence on stage.

“So if you get a little gassy, you’ve got to let it go. So people used to say to me, You are like a whoopee cushion. And that’s where the name came from.”

But Goldberg? Where did that come from? According to her

“Goldberg is my name—it’s part of my family, part of my heritage” she once explained, “just like being black… I just know I am Jewish.” In 1997 she explicitly told Barbara Walters she was part Jewish: “Jewish, Catholic, got Chinese people and white people in my family. I’m a mutt basically. I’m the best of all – of all the things that go into making humans.”

Of course, she’s the “best of all.” But it’s not done yet

Confusingly, she has also claimed to be “a quarter Mexican.” When Walters asked her where she’d be had she not changed her name to Whoopi Goldberg, she replied “I would have been a Tupperware lady.” It seems that Caryn Johnson saw value in appearing to be Jewish.

There are other versions of the story of Whoopi’s name: one tells of her “Catholic-Jewish” mother suggesting she adopt a stereotypically Jewish name to ensure her future success. Elsewhere she claims her family is “Jewish, Buddhist, Baptist and Catholic” and that she “took the last name for a Jewish ancestor.”

Her fables go on

Goldberg has been less open about the origin of her second name. In 1997, Playbill ran a Reuters quote in which Goldberg supposedly said she picked the last name of “a Jewish ancestor” as her stage name, adding that her “family is Jewish, Buddhist, Baptist and Catholic.” At the same time, however, Goldberg said she didn’t “believe in man-made religions.”

She said in a 2016 interview, “I just know I am Jewish. I practice nothing. I don’t go to temple, but I do remember the holidays. Religion is a lot of work, it’s exhausting. So I keep it simple, I have a pretty good relationship with God. We talk.”

“We talk.”  That’s what makes her Jewish. The truth is she’s less Jewish than Elizabeth Warren is American Indian.

The best information available online comes from the mid-2000s when a DNA test determined that Goldberg’s heritage was 92% African and 8% European with seemingly no specific indication of Jewish ancestry.

With all of that being said, Goldberg has insisted, without evidence, that her last name is part of her heritage and that she there she feels a connection with Israel.

“I feel a real connection there, but also with Palestine as well. We are one people, we really are,” she has said.

No one can find any Jewish ancestry in her past. Her real name is Caryn Johnson. But if you’re Black, Jewish, Buddhist, Baptist, Catholic and a quarter Mexican you’re make yourself pretty much immune to any criticism.

But what advantage could claiming to be Jewish afford a young comedian, especially at a time when many Jews were switching names to something more WASPish in order to get ahead? Perhaps if you’re a Jew, or even ‘Jew-ish’, you can make Jew jokes, right?

Minorities are often granted licence to joke about their own because they know both where to draw the line and also what negative resonances specific references might have. If Whoopi had been better connected to her putative Judaism, she might have thought twice about her festive jumper design aimed at Jews, depicting a ‘Jewish’ octopus wearing a kippah. Most Goldbergs I’ve met know that Jewish Octopuses are usually associated with Nazi era antisemitism. Not Whoopi.

After being criticized for the recipe, she used her being-Jewish-shtick as a shield

Speaking with the Orlando Sentinel the following year, Goldberg dismissed the criticism as “political correctness.” She added, “I am a Jewish-American princess. That’s probably what bothers people most. It’s not my problem people are uncomfortable with the fact that I’m Jewish.”

Her name is not Goldberg. She is not Jewish. She has culturally appropriated a name and a religion and stapled it to her skin color as a means of protecting herself from the backlash when she attacks others in her vainglorious self-righteousness.

I know a little Yiddish, and there is a perfect word for her.