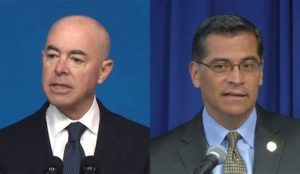 Joe Biden has a habit of nominating partisan hack politicians for jobs for which they are entirely unqualified. I am loath to think of even one who has been a success but there have been lots of failures. Xavier Becerra and Alejandro Mayorkas are two of these abysmal failures. It’s gotten so bad that even the puppet masters in the White House are getting bugged by it.

White House officials have grown so frustrated with top health official Xavier Becerra as the pandemic rages on that they have openly mused about who might be better in the job, although political considerations have stopped them from taking steps to replace him, officials involved in the discussions said.

So, he sucks but let’s not remove him.

He’s a bloody lawyer- formerly the Attorney General of California- which explains a lot. He is the Jon Snow of health care – he knows nothing:

Becerra, a former California attorney general and longtime congressman with little health-care experience, was never given a clear role in a response that is run out of the White House, prompting defenders to say it is unfair to blame him for recent stumbles. Still, his low profile has become more confounding as the pandemic has worn on and health officials have made statements that sometimes blindsided the president and bewildered the public, some officials and outside experts say.

He “isn’t fulfilling a core responsibility of his job, which is to act as a de facto field marshal coordinating the nation’s vast health bureaucracy to achieve the White House’s strategy, even though he does not set it.”

One COVID analyst said “He hasn’t shown up.” By last December he was “invisible.”

“Xavier Becerra spent his career attacking pro-life Americans and tried to force crisis pregnancy centers to advertise abortions,” Cotton wrote on Twitter. “He’s been a disaster in California and he is unqualified to lead HHS. I’ll be voting no, and Becerra should be rejected by the Senate.”

He lied about partial birth abortion. Abortion pill manufacturers have a champion in Becerra

However, one business that got Becerra’s support during a pandemic was abortion vendors who are using the crisis to increase sales of deadly chemical abortion pills. While states were scrambling to secure personal protective equipment and ventilators, Becerra organized 21 state attorney generals to sue the Food and Drug Administration, asking that the health and safety standards that protect women taking the drugs be dropped, even though the chemicals have four times the complications of surgical abortion, can cause dangerous complications later in pregnancy and in ectopic pregnancies, and can harm women’s future fertility if handed out without proper screening and treatment for blood type. They also pose a risk to women if abusers get hold of the drugs to force on women, sometimes without their knowledge or consent.

He’s great for killing the unborn but useless for saving lives.

Mayorkas is perhaps the single worst person in Biden’s cabinet. The DHS Secretary has been nothing but mendacious from day one. While illegals pour across the Southern border Mayorkas has declared the border “closed” in June and September. After 1.5 million arrests Mayorkas said the border is “secure.”

Never mind that Mayorkas simply takes those arrested, flies them around the country and dumps them in unsuspecting towns and cities in the dark of night. He shamefully asserts that the border is “no less secure” than under Trump.

He has repeatedly knee-capped ICE and CBP in their efforts to do their jobs and then he blames Trump for problems at the border.

I have referred to him as a raving, lying lunatic bent on turning this country Latino and I stand by that. Drugs are pouring across the border. More than 100,000 Americans will die from overdoses this year, primarily from fentanyl. Drug cartels have operational control of the border and are said to be making $14 million a week smuggling illegals into the US. That’s quite the secure border.

But Mayorkas sees his number one priority is protect illegals no matter how many Americans die for it.

Recently he went to the border and got a hostile reaction by those trying to protect the border.

One agent asked Mayorkas how his department could say Border Patrol’s main mission is border security while agents cannot do their job at the border due to administration policies.

Mayoraks responded that he appreciated “the candor” and said he working to make sure Border Patrol agents can do their job.

The agent said they have heard that response for years. He then reportedly turned his back on Mayorkas.

The Biden appointee replied, “You can turn your back on me but I won’t turn my back on you.” The Yuma agent responded that Mayorkas had turned his back first.

Indeed. Mayorkas has done nothing to secure the border. President Cauliflower Brain undid everything Trump put in to wrest control of the border and it has been nothing but a disaster.

Then he said something curious about the border

It is worse than ever and it’s his and Biden’s damn fault. He claimed that he

has approved for border wall gaps to be filled, despite the fact that Biden had halted construction.

Given that Biden is trying strenuously to get out of “Remain in Mexico” I’ll believe this when I see it.

This country is in a bad way, and it is in large part due to Biden’s insistence of putting left wing hack ideologues into positions for which they are wholly unqualified.

So, he sucks but let’s not remove him.

Hell, they would pick someone WORSE. Obama had the worst choices of personnel (and anything ever top choosing NAMBLA fan Kevin Jennings to be “Safe Schools Czar”?) and idiot Biden follows in the same tradition. I guess people who have never done anything wouldn’t know anything about how to identify capability and competency.

He “isn’t fulfilling a core responsibility of his job, which is to act as a de facto field marshal coordinating the nation’s vast health bureaucracy to achieve the White House’s strategy, even though he does not set it.”

The White House has no strategy. “Shut down the virus” is a bumper sticker, not a strategy. These are all people who think talking is a profession; they know nothing about action and accomplishment. They are worthless and, therefore, the nation languishes. It is a clear example of the “speed of the leader”.

The southern border has been intentionally left wide open. The result, of course, is corruption, crime, COVID and regime lies. Over 2.4 million illegal immigrants have been invited to enter and enjoy the hospitality of the US taxpayer while Democrats mine them for votes and labor. Still waiting for that drooling idiot Biden to reveal the “findings” of the investigations of those evil mounted Border Patrol agents accused of “whipping” Haitian illegal immigrants. The filthy liars don’t care who they defile with their corrupt incompetence.

Democrats know nothing about functionally running anything. Their method of governing is to tax the sh!t out of the population and simply waste the money. When the work is incomplete, they simply tax more and hire more incompetent people that are not held accountable. Of course, the idiot Biden regime is the worst example of the worst in history.

The very first article of Impeachment for biden with be his purposeful disregard for the security of America and Americans by leaving the southern border unsecured. He was given a secure border and had to do nothing but maintain what he had inherited. Instead he intentionally did away with the measures that were in place that had control over the southern border.

mayorkas could be a footnote impeachment to bidens impeachement.

There is no bigger hack than this guy. Watching this one wonders who is in charge. Starts with they tell me I’m supposed to call on. Who tells him this? Who or what is in charge? Then the idiot just sits there and says nothing while the press is ushered out. . What real President acts this way? 81 million votes they tell us. BS

Joe and his handlers are not on the same page.🤣🤦🏼‍♀️🤣 pic.twitter.com/L7x0kzb7aW

Maybe the voices in his head. There’s room for lots of them in there.

If it’s Disney at least one of the dogs would have to ...
Putin's Folly

There is a national interest in preventing wars of aggressio...