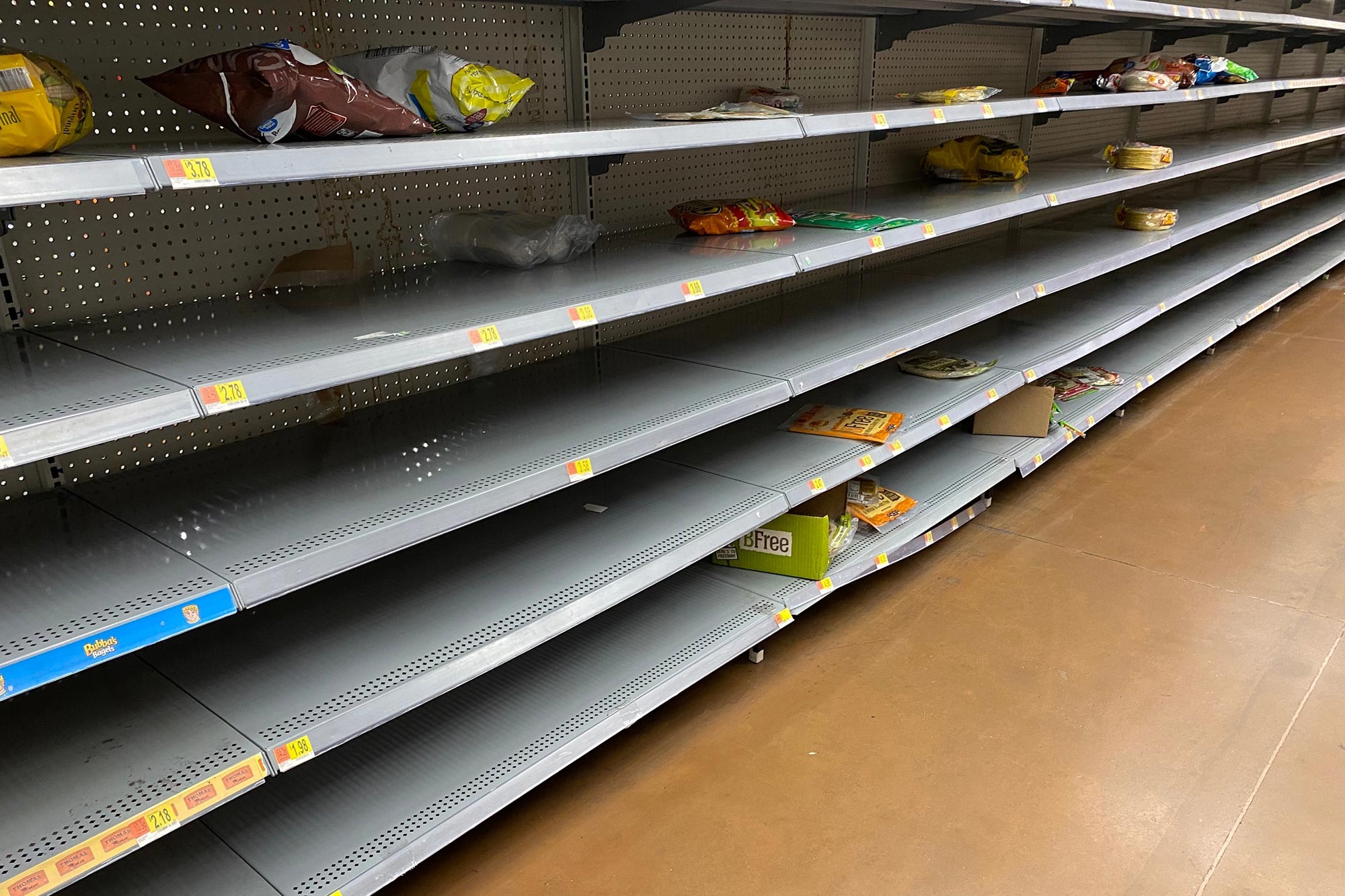 Joe Biden is the gift that keeps on giving.  First he promised to make Americans poorer which he quickly accomplished through high energy costs, paying people not to work and inept leadership.  Now Joe is unwrapping a brand new plan.  Apparently, our el presidente not only wants Americans to be poorer but he also wants us to forget about COVID. It’s called misdirection.  Don’t worry about being sick peasants because very soon you will be starving and quarantined.  Clever.

Biden recently pivoted from solving the COVID crisis and turned his focus on solving the supply line crisis. Joe thinks that Americans are too stupid to understand the problem.  This dumb American understands that multiple store shelves are emptier than the Welcome Center in Chernobyl.  Apparently, the new mission of slow Joe and his ‘crack’ team of advisors is to starve us into submission.  Everything that  Biden touches turns to manure.  I hate to admit it but Obama warned us in advance about Biden’s mental deficiencies. I am not an Obama fan but he was spot on with that prediction.  Have you noticed that all of the 81 million Biden/Harris voters have disappeared from the planet. Spooky.  It’s like the Rapture happened and God took the wrong group. (Disclosure: God doesn’t make mistakes and Biden/Harris voters have moved to Florida, Texas, Tennessee and are hiding in witness protection programs)

Losing weight is difficult but President Biden believes that he has the solution. 1) We can produce more food and sell it to China.  2) Team Biden can introduce famine in the land.  Actually a committee came up with that 2nd idea.  Someone had an epiphany and said, “Just release a black horse (3rd seal-famine) and introduce hunger in the country.  Hungry people will whine and complain and need to find someone to blame. The lame stream media will prove very useful and just blame all of the Republicans and of course their favorite villain, Donald Trump.”

Bare Shelves Biden, a new action figure, who is slower than molasses in January, can barely read a teleprompter and wobbles away from the press like a scared rabbit is demanding that Americans lose weight.  His patience is wearing thin with obesity.  Dr. Fauci will soon mandate that everyone must have a bright red target weight tattooed on their foreheads. Anyone who exceeds the posted weight limit will be restricted from restaurants, bars, bowling alleys, hospitals and placed on the no-fly list.  That seems only fair.  Food shelves will remain empty until everyone has reached his/her target weight.  There will be absolutely, positively, no exceptions except members of Congress, their kids, their staffs, Americans on welfare, illegal immigrants, criminals, teacher union members and postal employees.

I will be the first to admit that I need to drop a few pounds.  Okay, a recent unauthorized family poll indicated that I need to lose more than a few pounds. I shut off the electricity when that poll was being tabulated and when the lights came back on the results of the ‘new’ poll were very encouraging.  One ballot said that I looked like Paul Newman and another ballot suggested that I should gain some weight because I look too skinny.  The incriminating video of the new ballots mysteriously arriving by van in the dead of night has suspiciously disappeared.

Americans may just stay at home forever which already seems normal in 2022.  My wife and I are now binge watching the third season of Gilligans Island and really admire the professor who is super smart.  One thing has always puzzled me.  The professor is smart enough to build a functioning radio out of coconuts but he is unable to repair the holes in the S.S. Minnow.  That scenario reminds me of Democrats running our country.  Maybe Kamala can find out the answer when she visits the gaping holes in our southern border.

Snarky, with a generous dash of sarcastic humor…LOVE IT.

Serious question. Can’t the truckers just wear an “I’m Illegal” hat? Or is that only hunky dory on the Southern Border?
https://thepostmillennial.com/trucking-companies-warn-the-upcoming-vaccine-mandate-will?utm_campaign=64502

Keep hearing of train burglaries in LA on the scanner so went to #LincolnHeights to see it all. And… there’s looted packages as far as the eye can see. Amazon packages, @UPS
boxes, unused Covid tests, fishing lures, epi pens. Cargo containers left busted open on trains. @CBSLA

I’m told by law enforcement these @UPS bags are especially sought after by thieves opening cargo containers… they are often full of boxes with merchandise bound for residential addresses. More valuable than say, a cargo container full of low value bulky items like toilet paper.

This opened package from @REI
destined for Bainbridge Island, WA was taken off a train. Typing in the @UPS
tracking # and it obviously lists it as “delayed.” We found lots of opened packages bound for the Northwest along this section of tracks.
https://pbs.twimg.com/media/FJBOti5VIAEXqa2?format=jpg&name=smallhttps://pbs.twimg.com/media/FJBOti4VgAIjJM0?format=jpg&name=small

As you can see, trains frequently slow or stop in this area as they get worked into the @UnionPacific
Intermodal facility near Downtown LA. The thieves use this opportunity to break open containers and take what’s inside. I’d say every 4th or 5th rail car had opened containers.

Missing a package? Shipment delayed? Maybe your package is among the thousands we found discarded along the tracks. This is but one area thieves have targeted trains. We were told this area was just cleaned up 30 days ago so what you see is all within the last month. @CBSLA

Responsibility for policing the railroad right of way falls on Union Pacific Police… not local agencies like LAPD. We did see Union Pacific police chasing two people today off the tracks and keeping an eye on things.

Unfortunately @UPS
, it’s gonna take a lot more than a tracking number in this situation. https://twitter.com/UPS/status/1481771230944542721…
This Tweet was deleted by the Tweet author. Learn more

I just got one of those opened packages after a nearly 1 month delay.
The box had been sliced open with something very sharp.
But the contents were untouched as gifts of jigsaw puzzles to friends have zero resale value to homeless people or professional thieves.

The professor went right to work on finding the root causes of why they were stranded. He was still looking for money to throw into the ocean when they were rescued.

Democrats are pretty damned good at creating problems, not so good at solving them.

The biden regime is dead. There is nothing they can do to rectify the damage to America, the democrat party and themselves.

Unfortunately the damage done to America and Americans will take years to repair.

biden is the worst occupant of the WH in American history.

Sadly this is being planned and orchestrated. Plant a garden learn to preserve. Swap what you grow with things your neighbor grows.
https://www.johndenugent.com/is-the-rumor-true-that-the-biden-regime-is-paying-farmers-150-to-destroy-crops-plus-600-an-acre-to-mow-it-down/

This is all the fault of organized idiots who still refuse to take a global pandemic seriously. 850 thousand Americans are now dead of COVID, but it’s the pandemic of non-fatal illness that has disrupted commercial activity and kicked global and national supply chains into a state of growing dysfunction.

Yes Greg but there is already a thread for outting Fauci, the guy who told us to go on cruises and so on. No early treatment, sabotage of studies its all there if you actually read it for yourself and then bother to fact check beyond the strictly opinion hitmen of big tech and politifact designed to silence a second medical opinion.

Yes God help us they installed an imbicile in the White House that compared George Floydd’s overdose death with MLKs assassination.
Now we have empty shelves and Vaxx passports.

God could do without the help of the current democrat administration and their supporters like you greggie fighting his efforts or were you referring to Biden as your God?

He just needs to lighten up and laugh a little https://youtu.be/VuEu3YfxKhw

Democrats view COVID as nothing more than a useful political tool. They hide behind vaccine mandates so they can blame the deaths on the dead. They are cowards that hate the American people.