democrats plot a coup against America 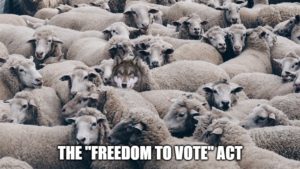 One of the hallmarks of democrat legislation is that is usually a wolf in sheep’s clothing, i.e., it’s always misnamed, and it has nothing to do with helping people but instead it’s about consolidating power for the left. Build Back Better was nothing more than a giant tax increase on the middle class, a gross expansion of government, and an offering of big tax breaks (doing away with SALT limitations) for the very wealthy. Build Back Billionaires would be a better name.

The current legislative frenzy is HR 1. It is called “Freedom to Vote.”

James Clyburn (D-NC) has been in Congress since 1993. That’s almost 30 years. In all of time Clyburn never saw a systemic problem with voting. Now he does.

Clyburn argued that Congress needs to “mature” with the times and make changes where necessary.

“Just because you’ve got one little nugget that was true back in 1876 doesn’t meant that that is true in 1976 … This country has matured,” he added. “This is not the same country it was over 200 years ago. We as a people must mature right along with it.”

He makes a half-assed argument for why all elections should be Federalized and there is not one iota of truth behind it. A civil rights activist, he is using his skin color in order to shame people into capitulation.

Nancy Pelosi is a dinosaur who has been in Congress since the Jurassic era. While blocking GOP access to Jan 6 records, she asserts that blocking “Freedom to Vote” is a “legislative continuance” of Jan 6.

Make no mistake- the very survival of the Republic is at stake.

In order to pass it, democrats would have to blow up the filibuster, the only thing that distinguishes the Senate from the House.  The filibuster has been in existence for 200 years and Joe Manchin (D-WV) and Krysten Sinema (D-AZ) are the fingers in the explosives damn for the moment. Manchin has said the filibuster “makes us different than any place else in the world.” It does. Other democrat Senators have problem with this as well:

Mark Kelly is not yet committed to a change in the Senate rules that would allow elections reform legislation to pass by a simple majority. A centrist who is up for reelection in November, Kelly said Monday he is still undecided just days before he may have to vote on proposals to weaken the filibuster.

[…]
Some, like Sen. Jon Tester (D-Mont.) like a talking filibuster but are “not crazy” about making an exception for voting rights. Meanwhile, Sen. Jeanne Shaheen (D-N.H.) says reform is needed but is promoting more modest changes. She cites the near-impossible odds the party faces in getting all 50 Democrats on board for changing the filibuster unilaterally, also known as the “nuclear option.”

What is it democrats want in this bill? They want to cheapen your vote as American citizen.

“Freedom to Vote” is wickedly anti-voter:

Almost a third of the  proposal from Sens. Amy Klobuchar and Joe Manchin is not dedicated to voting. Instead, it’s devoted to producing politicians who are insulated from their critics and less responsive to their communities. Public communications that so much as mention a candidate, including nearly all elected officials, would be susceptible to regulation as campaign ads for more than 10 months out of any election year. That will prevent many nonprofit and community organizations from speaking out about key legislation or galvanizing the public to do the same. How is this better for democracy?

That’s not the only provision designed to stifle speech about critical issues. The bill would also hamstring grassroots causes by inflating the cost of online communication and discouraging internet platforms from accepting ads about legislation. Other provisions could threaten groups that advise members of Congress about policy with legal action under constitutionally dubious “anti-coordination” rules. The bill would ban many such groups from making any communications vaguely described as promoting or attacking candidates.

The result would be censorship. An environmental group that meets with elected officials to advise them on pollution, for example, could be punished for urging passage of a resulting climate bill if regulators decide the advocacy “promotes” the candidacy of the bill’s sponsors.

The bill also invents election lies. Groups that mention lawmakers in their communications could be forced to profess their allegiance or opposition to the officials they name publicly. Even, that is, if said group is neutral. An ad that simply asks citizens to contact their representative about a piece of legislation would now bear a false partisan slant. It’s horrifying that a bill purporting to promote voting rights actually mandates election misinformation!

Worse still, groups could face bureaucratic investigations and debilitating fines for daring to speak. The bill takes power away from the Federal Election Commission’s bipartisan appointees and turns the agency’s general counsel into a speech czar who will dictate many enforcement actions. This unelected bureaucrat, who would not be subject to the Senate’s advise and consent power, will wield tremendous influence in deciding which groups can speak freely.

The bill’s supporters claim they want to remove barriers to civic involvement, but their proposal tramples on free speech. The bill would require groups speaking about legislation to expose their supporters publicly. As the American Civil Liberties Union warned about a prior version of the legislation, “We know from history that people engaged in politically charged issues become political targets and are often subject to threats of harassment or even violence.” Fearing for their supporters’ safety, many groups may not speak out at all.

Worst of all, “Freedom to Vote” does away with voter integrity:

This bill would also require all 50 states to allow same-day voter registration with no verification of identity. Same-day registration provides election officials no time to verify the accuracy of a registrant’s information or to check an individual’s eligibility to vote. This has enabled fraud in states such as Minnesota, where more than 1,000 ineligible felons voted before they could be verified. Their votes may have swung a 2010 election for the Senate.

As a large majority of the country favors voter ID this bill does not respect the will of the American people. HR 1 is appropriately referred to as the “Freedom to Cheat” bill. It is really the “Freedom of Democrat Cheating.”

The “Freedom to Vote” is a wolf in sheep’s clothing. It is intended to render any opposition to the democrat party impotent and turn the US into Venezuela, or Russia. It is a plot against the will of the American people.

This is a coup. The real thing.

An environmental group that meets with elected officials to advise them on pollution, for example, could be punished for urging passage of a resulting climate bill if regulators decide the advocacy “promotes” the candidacy of the bill’s sponsors.

Nah, it wouldn’t. In a case like that, Democrats would simply ignore the law and not prosecute. However, if a gun-rights group met with legislators, you can be rest assured there would be MUCH prosecution and rapid conviction and penalty.

No one is denied their vote by election security. Every fraudulent vote disenfranchises a legitimate vote, but Democrats want all their tricks of fraud legalized because they are in no way interested in risking the results of fair elections.

A federal grab of elections is unconstitutional. The Constitution gives plenary power of elections to the states and no other entity of government. It is a reckless attempt to institutionalize fraudulent elections…

Dems never win legitimately. They must cheat to survive as a political party.

Democrats already conducted a four-year coup against our nation culminating in the rigged 2020 presidential election and the follow-up false flag at the Capitol.

Democrats are traitors who can always count in the NYT/CNN and the rest of the M.S. Media to always cover up for their Dirty Deeds

Its the most important 10 seconds of defending the right to cheat bill and remembering it took but 1 generation to crash the 3rd largest economy.