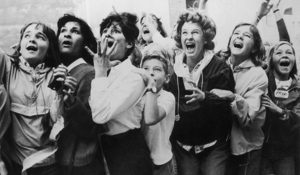 Who knew that historians were such drama queens?

We do now. Although it never has been a secret that historians run in left wing circles their rank partisanship has never been on such glaring display.

Michael Beschloss says Americans may have to choose between democracy and tyranny! Not only that, but he claims not all Americans believe in democracy!

“What you saw a year ago today was the worst instincts of both human nature and American politics. And it’s either a step on the way to the abyss or it is a call to arms figuratively for citizens to engage.”

Goodwin argued that this moment represents an opportunity for Americans to rededicate themselves to the cause of democracy, citing the example set by those who fought for the Union in the civil war and marched for civil rights in the 1960s.

“We’ve come through these really tough times before,” Goodwin said. “We’ve had lots of people who were willing to step up and put their public lives against their private lives. And that’s what we’ve got to depend on today. That’s what we need in these years and months ahead.”

But the Drama Queen crown goes to Douglas Brinkley, who likened Jan 6 to the Holocaust

A sober and clear-headed analysis could only conclude that Jan 6 was a protest that went too far, and America agrees. It is a shame that these “historians” tarnish their reputations by becoming left wing partisan hacks. It would do them some good to venture outside of the bubble that is DC and talk to real people. Besides, everyone knows what democrats did to Trump for four years- calling him a Russian asset and a traitor- was worse than the Holocaust, Pearl Harbor and 9-11 and the asteroid that took out the dinosaurs.

Did an asteroid really take out the dinosaurs? Hmmm? It was more than likely humans building fires for the first time and depriving the dinosaurs of oxygen at the level where they needed it.
I could go through the entire democrat agenda using the same type of stupid logic. But that would turn me into a Greg. My IQ at age three made me incapable of being that stupid.
The problem is that huge numbers of people, not only in the US, have been conditioned not to use logic. An emotional appeal is launched on every issue, that is usually false. Witness a sitting Supreme Court justice making outrageous claims about the vaccination mandates in a public forum. The cement in her head has hardened around a totally illogical proposition and no amount of logical persuasion will penetrate.