Facebook recently locked up the account of “Heros of Liberty” only to later backtrack following the uproar, saying it was an “error.” It was one of those “errors” that only happen conservatives.

A favorite of mine, @jewishdeplorable, was suspended from Twitter on Dec. 31.

Twitter suspended Nancy Pelosi Portfolio Tracker (@pelositracker). Pelosi is the queen of insider trading and abuse of her position. All this account did was to track her stock transactions so that other might enjoy the astonishing success Pelosi and her husband have enjoyed over the years. It got the ban hammer.

A Twitter account that closely monitored the trial of former Jeffrey Epstein partner Ghislaine Maxwell was suspended on Wednesday after the tech company claimed the profile was violating rules against “platform manipulation and spam.”

Twitter has been purging conservatives for some time, and it has accelerated under the new CEO Parag Agrawal.

Facebook has banned Donald Trump, Marjorie Taylor Greene and hands out suspensions at the drop of a liberal hat.

Youtube is suspending and demonetizing conservatives daily, us included.

All the above are censoring what they call “vaccine disinformation.” As you are going to learn, much critical and useful information about COVID- especially early treatment- has been censored. I look forward to the day when the families of some who could have been saved from COVID with early intervention sue the hell out of FB, Youtube and Twitter.

I’ve been suspended numerous times from Twitter and put into Facebook jail more times than I can remember. I reached a boiling point, and I torched my FB account. Now I recommend one action.

There are other social media sites that would welcome you. I have joined most of them and am going to offer my take.

Rumble is the better alternative to YouTube, which is owned by Google. Lots of good content. Rand Paul, among others, has moved there.

Content is very good. Dan Bongino and Dinesh D’Souza tend to overwhelm the place. People will react to your comments but not so much your posts. Picking up followers is really slow. Haven’t seen any censorship and people are civil.

This is the most freewheeling site of the bunch. All speech is allowed, period. You can say whatever you want. Of course, there is a lot of misinformation posted and you might have fun arguing. Following and getting followed is easier here than in other sites.

This is THE substitute for Facebook. It’s easy to create groups and no one is going to ban you. You could conceivably be kicked out of a group, but I’ve not seen anyone banned from the site.

This is probably the best replacement for Twitter. Joe Rogan joined and brought half a million followers with him. Top notch reporters Drew Hernandez, Julio Rojas and Andy Ngo are here as well. D’Souza posts a lot. Maria Bartiromo is also here. Jewish Deplorable is on board. GETTR has a lot of momentum going and I expect to see more and more all-stars present. Fox News, Daily Mail, Newsmax and more.

You have to power to hurt the giants. Twitter is down 3% today. Do it. 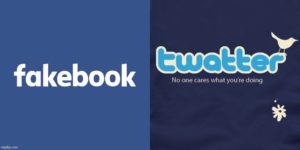