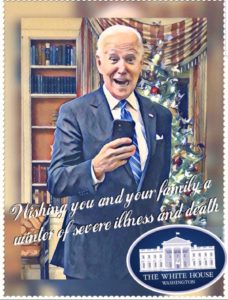 Just the other day Joe Biden threw in the towel on COVID, effectively surrendering to the virus after having pledged to shut it down in his presidential campaign. Biden’s and Fauci’s policies have been crushing, especially to kids.

During an appearance on “Face the Nation,” Crawford blasted the “crushing” policies, blaming them for a number of problems affecting children today, including the ongoing mental health crisis, an increase in suicide rates and learning loss due to school closures. “My kids hear me rant about this everyday, so I may as well tell you guys. It’s the crushing impact that our COVID policies have had on young kids and children, by far the least serious risk for serious illness,”

Late to the game Surgeon General Murthy finally comes to the realization that kids are suffering an “alarming” spike in suicides due to pandemic restrictions.

‘I’m so concerned about our children because there is an epidemic, if you will, of mental health challenges that they’ve been facing, and it’s partly because of the pandemic,’ Dr Murthy, a father of two, said on CNN‘s State of the Nation on Sunday.

He continued: ‘You know, a decade before the pandemic, we saw a 40 per cent increase in a number of high school students who said they felt persistent feelings of hopelessness or sadness. We had increases in suicides among kids, to alarming levels.’

Otherwise healthy children are at the least risk for COVID as evidenced by several studies. Vaccination might even represent a greater risk than the virus itself. Schools should have stayed open. Children should not have been locked down. That’s just one part of the malpractice committed by our vaunted “advisers.” There is another gross failure- a glaring omission.

From the outset Anthony Fauci took a blunderbuss approach to COVID.

Fauci told us that vaccination would protect others.

Vaccination does not stop transmission. The vaccinated can carry the same viral load as unvaccinated. Vaccination, while recommended, is a personal protection and not a societal protection.

Fauci has been a one trick vaccination pony this entire time and keeps moving the goalposts seemingly on a weekly basis. But as I’ve previously written, his avoidance of the flood of infected illegal aliens and his complete ignorance of natural immunity is frightening. Natural immunity has been shown to be robust and durable. Fauci won’t so much as address it. He just keeps ramming the vaccination stick up our backsides. Then we come to the colossal screw up.

Fauci seems to care not one iota for early treatment of COVID. He has zero interest in alterative possibilities, yet they are out there. We’ve all seen that airhead Brianna Keilar call Ivermectin a “horse dewormer.” There are animal versions and there are human versions. The creators of Ivermectin were awarded a Nobel Prize and it saved countless lives. Joe Rogan has touted the use of Ivermectin and been slammed for it, but make sure you understand that it was not used alone.

“We immediately threw the kitchen sink at it. All kinds of meds,” Rogan explained. “Monoclonal antibodies, ivermectin, Z-pak, prednisone, everything. And I also got an anti-D drip and a vitamin drip.”

Also note that it was an early intervention and that is really important. We also have remdesivir.

Researchers have found in a randomized, double-blind, placebo-controlled trial involving non-hospitalized patients with COVID-19 that a 3-day course of remdesivir resulted in an 87% lower risk of hospitalization or death than a placebo. The study has been published in the New England Journal of Medicine.

Whatever you want to believe, Joe Rogan and Aaron Rogers were successful in their efforts to beat COVID.

Pharma is furiously working on monoclonal antibodies to combat omicron which, given the mildness of the strain should not even be pursued. Data suggests that a case of mild omicron could offer resistance to the delta strain.

Then the Biden regime does one of the most stupid things it could do- paused production of monoclonal antibodies because they were allegedly ineffective against omicron. Then the CDC says “my bad” when we told you how prevalent omicron was. It wasn’t.

So, guess what? They need the monoclonal antibodies they just shut down and now have to ration them.

A doctor in Maryland said he had to cancel potentially life-saving monoclonal antibody infusions for about 250 people over the last week after the federal government stopped distributing treatments made by Regeneron and Eli Lilly because they aren’t effective against omicron, even though the delta variant, which the drugs are effective at treating, was still dominant at the time.

People are going to die

“I am as angry as I possibly can be about this,” Dr. Ron Elfenbein, the medical director and CEO of FirstCall Medical Center in Gambrills, Maryland, told Fox News Digital on Wednesday.

“The fact that these people are so adamant that they’re right when they’re using faulty data and they’re using faulty logic and frankly statistical modeling that has never been correct, ever, throughout this entire pandemic, to look at this, is just beyond the pale…. People are definitely going to die because of this or need hospitalization because [health officials] misread the statistics.”

White people infected with COVID in New York State – the hardest hit state in the country – are in jeopardy of being turned away from potential lifesaving treatments in favor of other more at-risk races because of a national shortage of two promising types of medical treatments.

In a shocking memo sent out by the state’s Health Department and approved by Gov. Kathy Hochul on Monday, white residents were told not to bother trying to get Pfizer‘s Paxlovid pill or monoclonal antibody treatments.

‘Non-white race or Hispanic/Latino ethnicity should be considered a risk factor as longstanding systemic health and social inequities have contributed to an increased risk of severe illness and death from COVID-19,’  the document reads.

To benefit from early treatment testing is critical, so what did Biden do?

The Biden administration passed on an October proposal that sought to avert this year’s holiday COVID testing crunch by manufacturing more than 700 million tests each month, according to a new report.

Vanity Fair reported that a group of COVID-19 testing experts from Harvard’s T.H. Chan School of Public Health, the Rockefeller Foundation, the COVID Collaborative and several other organizations pitched a 10-page plan to White House officials on Oct. 22.

It reportedly called for the production of roughly 732 million tests per month as part of what the document described as a “Testing Surge To Prevent [a] Holiday COVID surge.” The plan also included a provision for “Every American Household to Receive Free Rapid Tests for the Holidays/New Year.”

Now people are having a very difficult time finding testing and when they do many are waiting hours. The testing kits Biden finally ordered will be late and insufficient in number.

The only silver lining to this clusterf*** is that omicron is the mildest version of COVID thus far and I expect it to be greatly diminished by the end of January. If it does confer some immunity to other strains that will be the best outcome possible. All of that will be in spite of Biden and Fauci and not because of them.